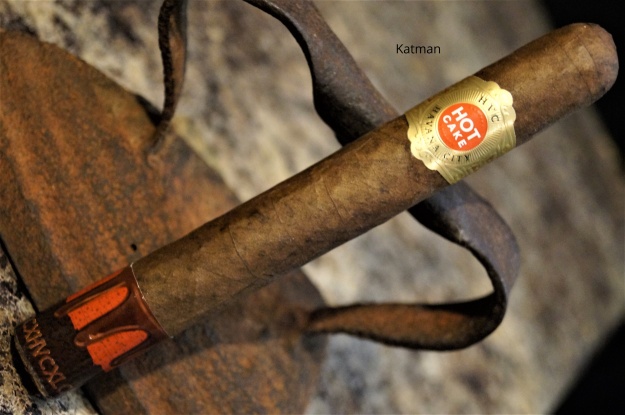 I believe the cigar was released in November 2021. I’ve had mine for several months.
I found no info on release quantities…but they are found for sale at several smaller online stores as well as Privada.
Also, I only found a couple reviews. None from the usual suspects.

BACKGROUND:
From Privada Cigar Club:
“Reinier Lorenzo is a master right now. HVC Hot Cake is made at Aganorsa Leaf in Nicaragua.

“It’s a full-on Maduro with notes of chocolate and raisin. This vitola was made exclusively for Privada Cigar Club.”

APPEARANCE:
I enjoy the mottled old penny and dots of black splotches that give the wrapper some real character. There is a consistent fine toothiness over, under, sideways, down the stick. The triple cap is nicely applied. Veinage is minimal. And there are no signs of seams. It has a sterling gig line.
This cigar is packed like Sophie Tucker. An equal amount of give surrounds the stick. Dry boxing is difficult due to Milwaukee weather being rainy or hot and humid. The footer band gives the Hot Cake an individuality that its brothers do not have.

Absolutely no air coming from cap to mouth. I whip out my PerfecDraw draw adjustment tool and go to work. And as is usually the case, the plug is in the area where the cigar band lives. Good to go.

THE WHOLE MEGILLAH:
The cigar lays heavy on my lips as I type away…Guessing it will be a solid 90-minute smoke.

First up is a slight tartness that occurs in a lot of cigars I smoke. The palate is a strange and mysterious thing. Within a couple minutes, it disappears, and the tobacco reaches out to me. Spicy start. It is a combo of red pepper and cinnamon.

This cigar has had plenty of time to mature and as such, begins with a teaser of complexity and balance. The burn line is dead nuts perfect.

Strength wastes no time in exceeding medium/full. I strap in and don the helmet they gave me at the Atascadero State Hospital many years ago.

Sourness appears suddenly and my cheeks collapse.
The complexity dissolves like an Alka Seltzer tablet in water. What happened?
In the blink of an eye, the cigar went from displaying great potential to a musty rag.

I gargle with tequila, swallow, and repeat.
Where did the rug go that was underneath me?

This is really odd. I taste no serious aging. Just spiciness and dirt.
Construction is impeccable.

My new specialist, Dr. Eyegor Feldman, has told me that the nerve wiring in my brain is causing the pain from an old injury. He received my permission to go forward with the procedure, which has only been used on inanimate objects such as Harry Styles, Will Smith, and Walt Disney’s head.
My only concern is that I may become a cross dressing, mickey mouse, tall black man. 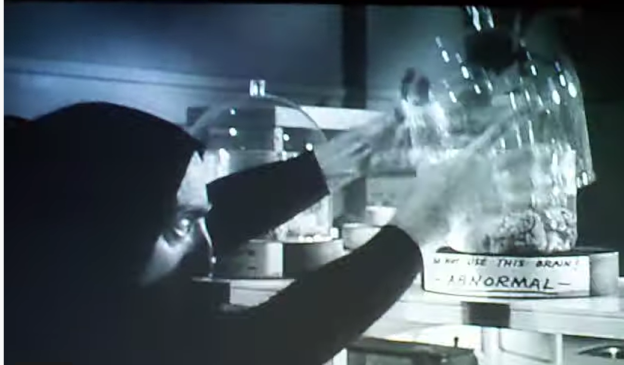 Transitions are absent. The finish is only red pepper and cinnamon. I taste no chocolate or raisins as reported in the nose description.

If the character can turn the light switch on so quickly, maybe it will return without a summary explanation soon.

Totally linear. This is a bummer. It has taken over 20 minutes to burn 1-1/2”. Fingers crossed that as the cigar nears the halfway point, something wonderful kicks in.

I’ve given up trying to understand how the human palate works. Timing has a big role.
Mustiness returns in a big way. I don’t like that.
I dig into my catalog, and I am surprised that I never reviewed any of the Hot Cake releases.

I go back to see previous reviews of the original Hot Cake and find scores that range from 87-90. Along with a couple of 95 scores. I also found several written reviews that didn’t care for it. And the reasons given are pretty much the experience I’m having now…a listless blend.

With 2” burned, the mustiness disappears. And that first impression I had at the start returns…potential. Dr. Jekyll and Mr. Hyde.

The cigar ain’t half bad now. I would call it out as a cigar meandering in the desert for 40 years. But no 15 Commandments at the finish line.

The blend is improving. But that sourness returns. I feel like I’m being gas lighted.

I really wanted to love this cigar and due to that anticipation, I am disappointed.

I believe that I am getting the gist of why the usual suspect reviewers didn’t get around to this cigar blend. All of them hit the original and discovered it was a decent cigar. Did they even try this Privada blend? Or was it too limited to touch? Or maybe they didn’t want to sully their previous reviews by giving this blend a ‘meh.’

I have Pandora playing classic R&B and that provides a calmative effect. This blend, with as much humidor time I’ve given it, should be sailing in the stratosphere.

Honestly, I find that online cigar stores that work with a master blender to produce an in-house blend only show up with something vital missing. So, I generally stay away from those cigars.

Barry White “Never Gonna Give You Up” is playing so I put on my disco shoes and start the spinning ball I have hanging from the ceiling. As a working musician, I hated disco. I even played in a couple of those bands back in the day and each time, I bailed. But who doesn’t love Barry White?

The cigar is heavily packed as it should be. The char line is impressive. More importantly, there isn’t a shred of interesting flavors doing the boogie woogie.

It is like the little engine that could…except it can’t.

I really don’t like dissing a cigar blend. Especially, with good credentials.
The character goes from a glimmering light of potential to D.O.A. every few puffs.
The fleeting moments of potential are wonderful. The stick is terribly inconsistent.

It seems the slight sourness is a mainstay for this blend. The mustiness comes and goes as it pleases. But there is no forward momentum. It lays there like my first wife on our honeymoon (1971). So, as a caring husband, I had her committed upon our return home.

It is frustrating as the blend becomes more erratic.
The halfway point occurs at the 40-minute mark.
I pray to the great Gollum that the second half will see marked improvement.

The strength is a contained medium/full.
The burn line goes AWOL and needs some touch ups.

If I get down to the 1-1/2” mark and nothing has improved, I’m throwing in the towel.

I take a break and smoke while listening to the music.

I smoked one a month in and it tasted exactly as I describe it now…so I ditched it after 2”.
The blend is on a journey to nowhere.
There are no signs of improvement. I tap out.