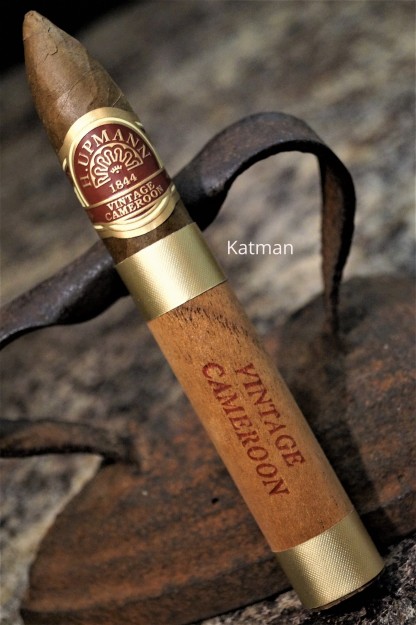 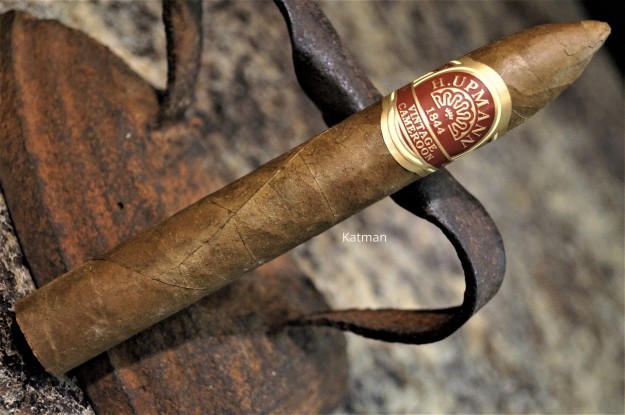 These cigars have been marinating naked in my humidor for 3 months.

BACKGROUND:
From Atlantic Cigar Co:
“The name recalls distinguished quality and the finest flavor of the classic H. Upmann cigars. These cigars provide a truly vintage smoking experience. For more than a century and a half the legend lives on in the rich, smooth satisfaction of handmade cigars that are unmistakably H. Upmann. The Vintage Cameroon features only the most select Cameroon wrappers over a unique and interesting blend of Dominican, Peruvian and Nicaraguan tobaccos, including a Nicaraguan binder, creating a profile of sweet and savory tobacco flavors.”

SMELL THE GLOVE:
Reminds me of my clothes after sitting around a campfire with friends. Slightly less prominent are notes of caramel, vanilla, black pepper, a tad of blackberries, and cedar.
The cigar is a bit light in the loafers, but I don’t see a serious issue.

I got a plug. Out comes my PerfecDraw draw adjustment tool after I shine the Bat Light into the sky. One swoosh and the plug, near the cigar band area, is gone and my draw is spot on.
The cold draw presents flavors of not much…woody, slight notes of caramel and vanilla, black pepper, cedar, and barnyard.

THE WHOLE MEGILLAH:
During my extensive research, I discovered that this was Cigar Aficionado’s #24 cigar of the year in 2004 with a rating of 92.
So, clearly, I am not reviewing a cigar new to the market.

There are virtually no flavor bits to describe other than hay and a whole lotta’ blandness. But it’s early…Fingers crossed it ain’t a dud. I don’t trust Cigar Aficionado on their best cigar of the year picks. Does anyone?

With ¾” burned, creaminess jumps into the fray along with vanilla, cedar, and mild black pepper.
Construction seems to be holding its own. The char line is dead nuts.
Strength is very mild.

I noticed that not a single cigar industry website took a whack at reviewing this cigar in the 18 years It’s been available. The cigar was a gift from a friend who got his sticks from an online cigar of the month club. So, that makes me the schmuck to pick up the baton and run with it…although, I am not, and never will, work in the cigar industry. I like my testicles right where they are.

Despite the cigar feeling very light, the burn is slow and relaxed…like me when I get up out of a chair. Except the cigar doesn’t groan and moan.

A character begins to kick in at over an inch in. I dare not say complex, but any improvement is welcome.

Charlotte and I have to babysit the 2-year-old and 5-year-old grandsons this afternoon. Chaos is not exactly how I would describe it…even though Charlotte ends up crying from their nonstop manic behavior. I always wear a Claymore mine strapped around my neck in case of children overload.

I’m not sure another 6 months of humidor time will make this blend better.

It is most definitely a morning cigar. It probably tastes like anything you are drinking. In fact, it might be used like a Biscotti to dunk in your coffee.

Transitions are AWOL. The finish is indescribable as I can’t taste a thing.

There are millions of cigars out there. And Cigar Aficionado made this loafer #24 in 2004 with a 92. Damn. It must have cost H. Upmann a fortune.

The blend is described as medium. Bullshit. It is stuck right at lackluster mild strength.

I don’t know what’s wrong with me. I never review a cigar I haven’t smoked before because I only had one stick in my possession. I bang my head into the wall half a dozen times and then self-flagellate myself.
Now, it’s not a bad tasting cigar. It must settle with the moniker of one trick pony. Strictly a linear taste profile. Nothing interesting to see here folks…move along.

While the cigar offers up zero complexity, no transitions, a minimal finish, and not a sign of nuance, it isn’t a terrible cigar. Just bland.

The halfway point brings the strength to medium…at last.
There is some graham cracker, creaminess, vanilla, a touch of lemon, cedar, and caramel.

The cigar is devoid of balance. It would take a huge bribe for me to say nice things about this blend. The bidding starts at $100.

If this cigar is going to show off, now is the time.
Bitterness enters the picture. Drat.
I’ll give it a few more minutes to redeem itself…and if it doesn’t, stick a fork in me.
I’m bored. I’m done.

This cigar has been available for nearly two decades and obviously, it still sells. A mystery. Must be the cheap price. And the nice cedar sleeve.

And for something completely different:

My second cousin, Fred Selden, is an award-winning reed player. He is 4 years older than me.
Fred is a brilliant player. So much so, that at the age of 13, he took his own jazz band to Europe to tour. He has played with just about everyone. And in the last couple of decades, he has been heavily involved in the movie industry. Either as a player or composer.

From the Fred Selden web site:
“Dr. Fred Selden is a Grammy nominated conductor, arranger and composer, and one of LA’s top session players. His musical talents have been featured in countless television and film projects, and he has a long history in the music business. He has recorded with such illustrious names as Don Ellis, Ringo Star, Elvis Presley, Michael Jackson, Natalie Cole, Bill Holman and Lionel Hampton to name a few. Fred is also one of the pioneers in the use of the “Electronic Wind Instrument” (E.W.I.). He has received a Grammy Nomination, a Gold Record and the National Academy of Recording Arts and Sciences “Most Valuable Player Award” for three years running. He has also written numerous music education books and composed, arranged and performed on many albums.”

This is a Don Ellis Orchestra recording that Fred played on. Listen to the first number. Ellis and Maynard Ferguson were the first to put microphones on every instrument. It is pretty kick ass for the early 70’s. Although, I detect a TV theme song influence.

Back in the mid/late 1960’s I would visit him and his family in Studio City, CA. I was related to him from my mother’s side. His dad was one of the biggest entertainment lawyers in Hollywood.

It was Fred that greased my path so I could take bass guitar lessons from Carol Kaye. That was 1968-1969. It is inexcusable that she is not in the R&R Hall of Fame. While others of the L.A. Wrecking Crew have that title, Ms. Kaye does not.

Carol Kaye is alive and well at 87. She has a website, and she is sharp as a tack as she delves into music theory on the guitar and bass guitar. A few years ago, I communicated back and forth with Carol, and I admit I was thrilled. She pretended to know who I was but if I make it to my middle 80’s, I hope I have half the lucidity she has.

I had very little family. And my Aunt Gussie and Uncle Frank were terrific people. I really loved them.
So I used to take a drive and visit my cousin. I loved hearing his music stories. Fred could name drop like no one I knew. But when I got back from London in 1976, I was excited to talk to him and share my road stories. I got about 4 seconds into one story and Fred stopped me…he told me there are a million road stories. I deflated into the chair.

Fred had an older brother, Bobby. Bobby had a serious drinking problem.
Sometimes, I’d get there, and Fred was doing a last-minute session.
So I sat with Bobby and his neighbor and Oscar winning actor, William Holden. Yeah, this family was that upscale.
Holden was a major movie star from the 1950’s-1980’s.
I remember him in Sam Peckinpah’s “The Wild Bunch.” Man, he looked old. 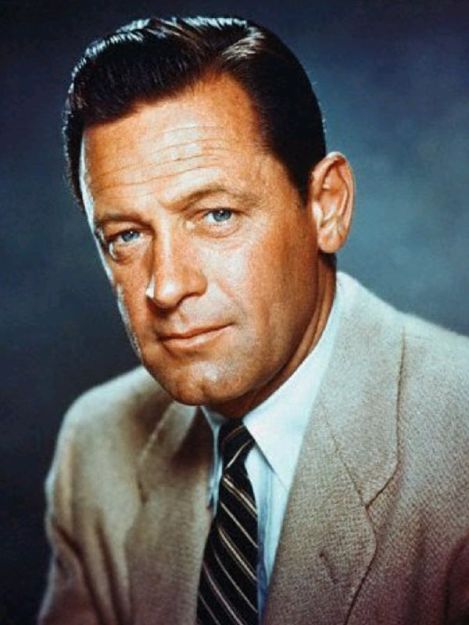 We would sit on the back porch and kibitz. Bobby had a liquor cart on wheels. He sat it next to the round glass table and I basically just listened.

Holden would get shit faced and start dishing dirt on Hollywood. I was entranced.
But you could see in Holden’s face that the mass consumption of alcohol was taking its toll.

I must have visited a dozen times when Holden was there. Bobby and Holden must have had this drinking buddy thing going. I was only in my late teens and had nothing to offer to the conversation. Still, I was a big movie buff and I had lots of questions that Holden was glad to answer. I was especially interested in “Bridge on the River Kwai.”

Well, as expected in the human experience, things change. My life was moving forward, and I just didn’t have the time to visit as much. Plus, I got tired of watching two men getting drunk out of their minds in the middle of the afternoon.

I think the last straw was that one day, Aunt Gussie came out of the house and began yelling at Holden for being a bad influence on her son, etc. She let him have it. He got up and went home…a 5-minute walk.

I do remember, several years later, hearing that Holden died a miserable lonely death. All because he was a lush.

This is from Wikipedia:
“According to the Los Angeles County Coroner’s autopsy report, Holden was alone and intoxicated in his apartment in Santa Monica, California, on November 12, 1981, when he slipped on a rug, severely lacerated his forehead on a teak bedside table, and bled to death. Evidence suggests he was conscious for at least half an hour after the fall. It is probable that he may not have realized the severity of the injury and did not summon aid, or was unable to call for help. His body was found four days later.”