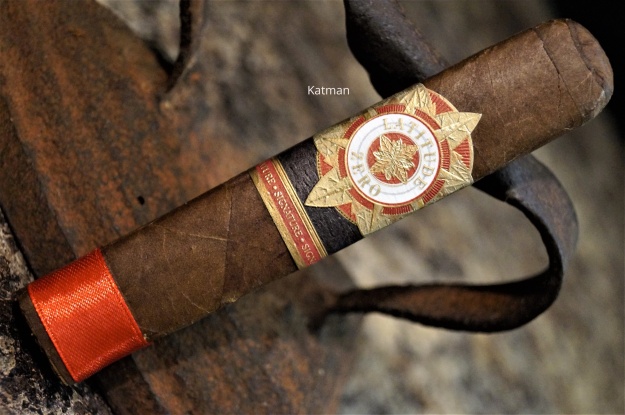 I’ve had my sticks for 3 months. Got them before they were released.

BACKGROUND:
This cigar was released June 2022.
From Halfwheel.com (6-28-2022):
“Latitude Zero, a brand that is part of Scandinavian Tobacco Group’s portfolio and that pays tribute to the tobaccos of Ecuador, has released a new blend created by Raul Disla.

“The tobaccos in the blend coming from the Oliva Tobacco Co.

“Latitude Zero Signature is rich and refined with an intriguing spice,” said Kevin Irvine, product coordinator of STG’s online and retail division, in a press release. “It complements the original Latitude Zero blend, offering a completely unique smoking experience. This cigar smokes like an ultra-premium, so it’s a great choice for someone who wants the utmost in tobacco quality and complexity at a great price point.”

THE WHOLE MEGILLAH:
Before I begin, a reader comment asked how I light a cigar. I generally follow the schematics of how Cigar Aficionado describes the procedure. But everything depends on the cigar’s size, shape, and ring gauge.

From the start, a simple complexity is at play. The diverse tobaccos seem to have matched up nicely as there is a cohesive balance that gives me hope for the rest of the cigar.

The burn is perfect. Construction has been done with care. And there is an obvious depth to the fully filled sausage.

Strength is right on the 10 ring of medium.

¾” in, the complexity is ratcheted up. The mouth feel coats everything including my ferret shaped uvula.

While the strength continues at medium, the cigar expands its horizons as the complexity deepens and flavors meld.

It’s nice to smoke a cigar that doesn’t have the over used Nic puro taste. Oliva Tobacco is the biggest supplier of tobacco in the world.

The blenders did their research and put some real passion into this blend. As opposed to finding a farmer’s tobacco stash behind the dumpster and making 500 cigars for $2 a pop and re-selling it for $14.

The cigar proves, at $8, that there is hope for the cigar industry. I contend there are plenty of opportunities to produce wallet friendly cigars like the Latitude Zero Signature…but I also believe that too many manufacturers take advantage of the average smoker with high priced duds…lots of bullshit P.R. to lure us suckers in.

Creaminess takes the lead. A wonderful malt and hops element appears that tastes like a fine lager. Savory v. Sweet is on point. Caramel shows up for the first time.

Transitions begin and the finish is lazily entertaining my palate.

I seem to be cursed when it comes to how a box pressed cigar burns. This baby has a sharp char line that asks for no attention.

Sips of water enhances the fun.

The cigar is heading towards a full experience without big flavor wheel elements. Every note I’ve described has moved to the background chorus while the complexity does the heavy lifting. The spiciness lays back and doesn’t get in the way. Just enough to make Goldilocks smile.

Due to the intensity, nuances and subtleties appear giving the cigar a very well-rounded approach that shows the blend is giving its all to please.

At the halfway point, the strength is upped.

This cigar just keeps getting better with every puff. Linear is not in its vocabulary.

I believe a lot of snobby smokers, like me, wrote this cigar off as just another bundle cigar. It is a delicious surprise.

Graham cracker shows up. I just need that little milk box and a straw and I’m good. A smoked meat presence bursts from the black lagoon. The balance remains on point. Cinnamon jumps in. I still taste that icy cold beer. There is a satisfying warmth to the blend that is hard to put into words. All I can say is that this is a great everyday go-to cigar.

The blend reminds me of a Casdagli, a Saka blend, and an Isabela blend.

The cigar nails the presentation of being a very smooth cigar.
Strength hits medium/full.

Yesterday’s review of the Ezra Zion Revolver Saturday Night Special was a drag on what time I have left on the planet. I can’t get that time back. This cigar makes reviewing a pleasure.

With 1-1/2” to go, there is no heat or harshness. The intensity and complexity are a delight.

I’m a Maduro man. But this multi-country mix of tobacco is a great alternative that is just as satisfying to my palate.

As far as I know, this is a regular production cigar. I’d love to buy a box next time.

I believe I’ve made my point. Just remember to be patient. The 3 months of humidor time made a big difference. I tried one a month in and it was not nearly ready.

We had played our first gig in Amsterdam…normally, the first city on the European tour.
We always took the opportunity the Dutch government provided by going to the Paradiso Club which was government run and required a lifetime admission of 5 Guilders. Back then, a Guilder was around 37 cents. The Paradiso was a multi-tiered humongous venue with different styles of live music on each floor.

It had a giant main auditorium for headlining acts. It was always a gas because we would go to the basement, where the hash and weed was sold, and stocked up for the entire tour…which normally lasted 7-8 weeks. As it was such a treat, we ran out of our goodies by the time we hit Germany…maybe two weeks later. We then depended on the kindness of fans to feed the monster.

Needless to say, we were stoned out of our brains when we hit the big stage that first night. Stew and Sonja liked to drop acid before a show. I had no idea at the time…I have no idea how they did that. I never smoked anything with thc in it right before the concert. Our last song of the show was our theme song by Darryl Way: “Vivaldi.” He did a drawn-out solo in the middle which gave Stewart and I time to get stoned. The roadies had a pipe filled and ready for us. It gave us a whole new perspective during the encores.

After one gig, our Dutch agent took the band, and the main core of roadies, out to a late dinner at a fancy restaurant.
Around 1am, we were stuffed.

We got out of the car and surveyed the territory. All the girls sat in tiny bay windows that were back lit with red lamps…lined up in a huge row along the famous canals.

Prostitution was legal and the girls had to get checked out on some sort of timetable. Of course, that didn’t help if the guy just before you had the clap.

Rik saw a girl he liked and went in. Darryl and I waited beside the car.
He came out 5 minutes later and told us he made a deal for all three of us. $20 each.

He announced that he would go first…since he was paying for it.

I was nervous as hell as I had never paid for it…in cash, anyways.

He returned 20 minutes later with a shit eatin’ grin. He slapped us on the backs and proclaimed with pride; it was GREAT!
Darryl announced he was going next. Great. I was getting thirds. This did not make me happy.

All I could think of was a gooshy quedgie. But then these girls were pros. They wouldn’t last if they weren’t clean. Gulp.

Darryl returned 20 minutes later with that same shit eatin’ grin and bragged what a stud he was.
Now it was my turn.

I lumbered into the room. It was the size of a closet. Big enough for a single bed and a make-up table.
The girl was of Heinz 57 heritage. She was from who knows where, but she was gorgeous.
I made small talk, but she would have none of it.
“Hurry up. Get your clothes off.”
I did as she commanded.

I tried to impress her with who I was, but she said that she only liked R & B. And had no idea who Curved Air was.

She lay on the bed and was naked from the waist down. She kept her halter top on. Well, that was no fun.
She handed me a rubber.

Then she took a handful of something from a jar and slathered her quedgie with it. All I heard was this squishy sound. I was losing my enthusiasm.

She jerked on my schmekel a few times to get me hard. I was so scared that it wasn’t that easy to get an erection but, hey, I was 24 and anything could give me a hard on…so, it didn’t take long.

She kept up this mantra and it was driving me nuts. Elvis had left the building.
So, I tried to take her top off. She stopped me.
“That will be another 20 Guilders.”

I didn’t have 20 Guilders on me at that very specific moment.

I couldn’t orgasm, and I wasn’t having any fun, so I began to sing Simon and Garfunkel’s “Keep the Customer Satisfied.”

As I got dressed, she told me: “You didn’t drink tonight, did you?”
I smiled and said no. I don’t drink. “Why?”
She said the other two guys obviously had a lot to drink.
I looked confused.
Then she took her index finger…made it stand up straight and then allowed it to droop.
I laughed so hard my sides hurt.

So, after all this, I was the only one to get laid. The others were too drunk. And they came out bragging about how good it was.
I sauntered out to the car with a big smile.
They looked at me and knew in an instant that I knew.
They hung their heads and said nothing. I laughed.

The experience cured me of my curiosity. The idea of paying for sex was wiped clean from my Bucket List.