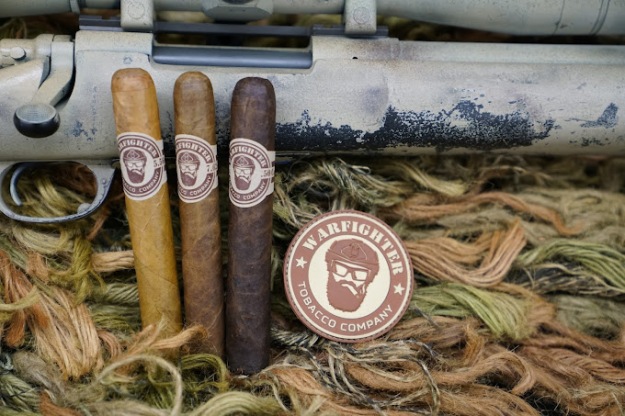 Today, the reins are being taken over by Larry Beeman (Detective, Retired). Enjoy his review.

I bought a 6-pack sampler online from Warfighter Tobacco. I selected the .50 Cal Field Maduro for review because as I inspected each stick, this one leaned close and casually whispered in my ear that its scent is indicative of notable depth and complexity. Yes, I hear cigar voices. If you live long enough, you will too.

Nice presentation. The logo on the band has subtle earth tones and projects an image proclaiming “I’m here” and “you want me on that wall, you need me on that wall.” The color of the wrapper reminds me of a Moon Pie. The mash bill is a habano maduro wrapper with a habano binder, and habano filler from Nicaragua and Colombia.

The aroma of the wrapper is intoxicating. Sweet malt, oats, stone fruit positioned behind hard cover, aged tobacco, just a pinch of floral, and chocolate. But not just any chocolate. This is not the kind of chocolate for sale at the Piggly Wiggly. This is the stuff that is deep, rich, unfolding and fundamentally grabs your olfactory by the hangy-downs and says, “I’m in charge here.”

The foot is torched and she pours forth a remarkable cumulus of smoke.

I get rich tobacco, subtle cream and fruit. We are just shy of medium strength. The draw is Goldilocks. A hint of red grapes. Then toasted raisin bread and pepper. Not black pepper. Maybe Aleppo. The pepper used in Greek cooking. An inch in brings vanilla and some tart cherry.

The burn starts to canoe. Could be operator error. In fifteen years of enjoying cigars, I have only smoked a dozen or so that burned perfectly from muzzle to butt stock without any maintenance. I let the burn go where it will. The light gray ash falls at 1” and is solid not flaky.

At the end of the first third all the elements are coming together to form noticeable complexity. The chocolate that was present during the pre-light sniff shows up paired with brown sugar. Now enters nougat, peanut, and butter has been slathered on the raisin toast. Maybe even a little hickory smoke. Although the flavor shows great promise, the Field Maduro needs more humidor time. Probably three months.

At the half mark strength is one click above medium. Cereal grains and possibly some graham cracker join us. The canoe burn rights itself.

The blending of these tobaccos was not just a shot in the dark. These guys knew exactly what they wanted, and stuck with it until their flavor objective was achieved.

Heading toward the final third, pepper is ramping up. More malt, more cherry. The band is easily removed. Dayam, this is what I came for.

The sweet spot reveals herself in all her glory. There has been an intriguing aroma coming off the head since lighting that I just haven’t been able to place. Finally, the aroma is identified as the fresh baked Chicago Italian bread made at the Publix bakery.

In the final two inches we really get down to business. Flavors are concentrated and intensified. Never hot, harsh or disagreeable.

Strength is medium plus. Nicotine is negligible. Coffee and pretzel make a cameo. Not just coffee, but good coffee. As things come to a close, I make plans to buy a box of the Field Maduro and let them rest for several months. This cigar has been deeply satisfying, and shows solid aging potential.

Candidly, few people who have not served our great nation as a combat veteran, firefighter or police officer understand the pervasive brutal behavior that transpires in communities throughout the world on a daily basis. Over time, exposure to conflict, violence and tragedy has an effect on those operators who put themselves in harm’s way. It changes them. It is that personal change, a history of shared experiences and an intense patriotism that forms bonds as strong as life and death. They are the Warfighters.

It is clear that the people behind Warfighter Tobacco are the real deal. Their story. Their language. The way they carry themselves. Real deal.

Do you support the men and women who staff the frontline of this great nation, and the hundred other nations where they fight to keep the winds of war from staining our soil? If yes, maybe give Warfighter Tobacco a try. It’s a two-fer when we can patronize veteran owned businesses and we genuinely like their products.