The blend is comprised of medio tempo maduro, ligero and viso from Aganorsa farms in Jalapa Valley, Condega Valley and Esteli in Nicaragua.

Medio Tiempo is an interesting element to the blend.  We are all familiar with Ligero and that it is the highest priming on a tobacco plant.  There are special plants that have two tobacco leaves that grow above the ligero. They are called Medio Tiempo. 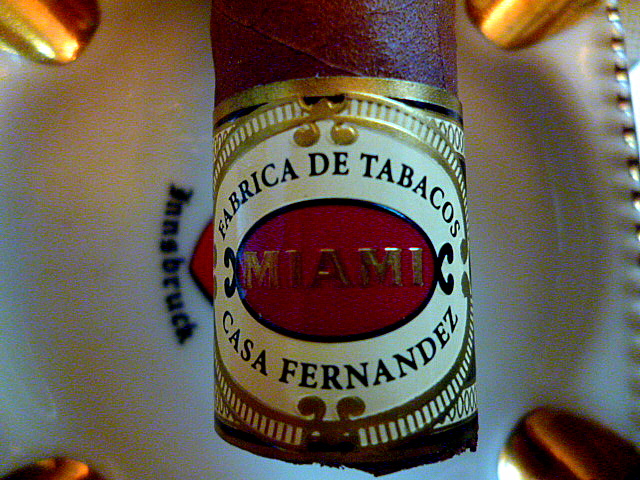 These leaves receive the highest amount of sunlight of the tobacco plant. The more sunlight it gets, the more nutrients it receives and therefore the most flavor.  Because the leaves are much heavier than the other leaves on the plant, it is harder to handle and roll properly. So you generally only see the Medio Tiempo used in larger ring gauge cigars….but when you do get a cigar made with this specific leaf, you are getting a very special stick.

The cigar was originally called just the Casa Fernandez but was changed to the current name for the 2011 IPCPR convention.

Construction is solid. But with a lot of veins. The stick has just the right amount of give. You can feel the toothiness while running your fingers along its wrapper. The color is a milk chocolate with just a bit of red.

I smell oak, leather, baking spices and some coffee on the sniff-o-rama.

I decide to punch the cap. I don’t believe it has a triple cap just from the look. 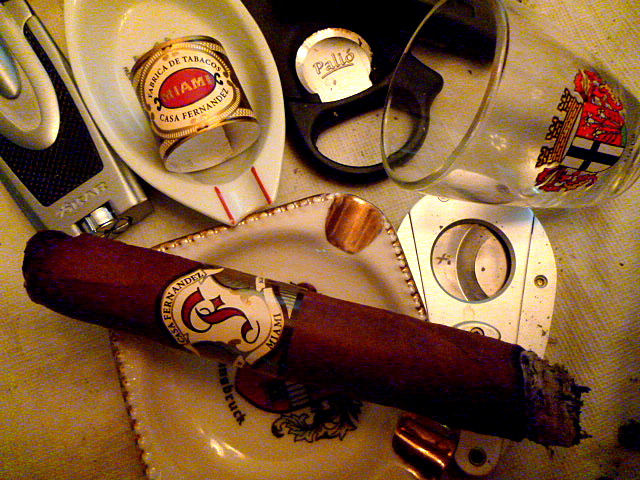 It starts off with some sweet cream. I love this cigar.

The draw is perfection. The char line is just slightly erratic. It will correct itself.

The biggest component of this cigar is spice…red pepper.

It is joined quickly by a rich creaminess and sweetness. It hits caramel like an archer hits his target. Within the first inch, it is bursting at the seams with flavor.

I read several other reviews and doggone it….I object strenuously. These reviewers are so sophisticated and so used to smoking nothing but the best money can buy, that they don’t see the inherent greatness of a good cigar. They may give it an 88 or a bit higher but this cigar is better than that.

This is my new favorite cigar, flavor of the month, and when they come in, I plan to beg Buddah for more. I WILL even pay for them. To me, they’re that good.

At $7 for a toro, this cigar is a steal. The manufacturer could have easily asked for twice as much and it would still be worth it. But then it would lessen the amount of people who could smoke it on a regular basis.

I finish the first third and it hit the spot. But having smoked several prior to this, I know what’s coming.

I absolutely love spicy cigars. I think most of us do. Us manly types. Us men with giant penises that scare snakes back into their holes. Us men who take any woman we choose. Us men who go to the front of any line and are accepted with a smile and a “Yes, sir.” Us men who can fell a deer just by staring at it. Us men who can rob banks with impunity….uh…..I…uh….Us men who don’t rob banks and never said we do.

The cigar is showing off and kicking its legs like the Rockettes at Madison Square Garden. And I’m peaking under its spanx.

This is my last CF. And I am mortally depressed. I could go out and kick a stuffed cat. Garlic stuffing please.

At the halfway point, the cigar has mellowed and the spiciness is tame. The overwhelming creaminess matches the caramel sweetness like a match made in Cleveland.

Woody Allen once said that there are two types of people in this world: The Horrible..which are people with terrible physical conditions and live their lives out in an iron lung…and there is the miserable…which is everyone else.

The notes of caramel are making me insane. I have thoughts of insane things…things insane people do….like order a triple burger and a Diet Coke. That is what this stick is doing to me.

The cocoa is abundant. It’s like dipping a Mars bar into a vat of cinnamum…cinnnuninum….cinanonmon…cinnamon. Yeah!

The story below is one I’ve published before so for the people who have already read it, my apologies.

I’m taking my time with this wonderful stick. I don’t want it to end. It’s a monstrous flavor bomb.

It’s raining outside which is fucking up the natural light I need for my photos.

While rehearsing in a huge English church back in my Curved Air days, Stewart Copeland (The Police) would freak us all out by going into the chapel and screamed obscenities at God. Now I’m not a highly religious guy but that’s just wrong. He did it on purpose to make the rest of us uncomfortable and we pleaded with him to stop that. Stew was a real dick. Try playing bass with him sometime. I did. For 2 years. He soloed through everything. Forcing me to play quarter notes on my bass so the rest of the band knew where ONE was. Only you musicians will know what I’m talking about. If you’re not a player, ONE is the first beat of a bar.

I finish out the cigar and am completely sated. Right to the end, the cigar never gets harsh or bitter. And the nicotine level is low. So it’s all downhill from here for the rest of the day. My back and neck are killing me from sitting in an uncomfortable chair. This is my second, and last, review of the day. I want you all to know how I suffer for you people.

Butch and I ordered one extravaganza each. The voice on the other end of the phone said it would take approximately 45 minutes. OK. This would surely be a feast.

Butch headed straight for the courtesy fridge with the ridiculously expensive treats. Items that I was not about to pop for, regardless of how much pot we had smoked.

An hour later, no food. I called room service and was assured that it was on its way.

I had to pry Butch off of the fridge. I had a brilliant idea. A little toot of cocaine would assuage our appetites until the Waldorf could manage to deliver the sumptuous feast to the peasants. I went over to my suitcase where the drugs were stored for the trip. I removed a small brown colored gram bottle containing the white death.

The dilemma: Where do we find a smooth surface to lay the drug out.. in lines? Butch looked at the wall over the dresser. He got up, walked over to the wall, and removed an enormous mirror. I mean enormous! This piece of art was at least 36” x 48” with an ornate frame. Slipping and sliding, he waddled over to the bed and laid it down. It nearly took up the entire bed.

I placed the bottle on the mirror and got up to get my wallet. Within the wallet would be our means to snort the white powder: a $20 bill to be rolled into the shape of a tube. When I came back to the bed, Butch had already dumped the entire amount of the bottle on the surface of the mirror.

A gram, back then, was worth about $100. It was also too much for a little appetite suppressant. This was essentially a heart attack dose.

I went first, doing a very small amount….maybe a quarter of an inch. Instant wake up and “what hunger?” As Butch leaned over the mirror, there was a knock at the door. Both of our heads jerked up and stared at the portal and then back at each other. The food!

Obviously, we could not allow the waiter to see the mirror on the bed and the illegal substance atop. I yelled to Butch, “Get rid of it!”

Butch grabbed the mirror, and just like a scene from the Three Stooges, ran towards the open door to the adjacent suite and slammed into it.

The mirror held sideways in his hands overlapped the door by at least a foot on either side. Rebounding from the jolt, he turned the mirror the other way. But the over sized frame would not allow him through.

The knock at the door was louder and sounded impatient. I yelled that I’d be right there. “Hang on!”

Butch threw the mirror back on the bed. Yes! That’s right. Scoop it up and shove it back in the bottle.

He grabbed the rolled up bill and proceeded to inhale the entire gram of coke up his nose.

The paramedics would be called. Survival was not an option.

As I waited for him to drop in a heap, the door knock came, for what seemed, one last time. I pulled the comforter over the mirror and opened the door. The food was wheeled in by a disgruntled employee.

Word was out that a pair of Hollywood types wearing T-Shirts were in the prestigious hotel.

I signed for the food and he left.

Butch’s eyes had no irises left, only pupil. He couldn’t blink. “Still hungry, Butch?”, I asked.

There was no reply. He had lock jaw.

I was hungry and he did not seem near death.

They forgot to deliver one of the burger and fries orders. I shook my head. We waited an hour and a quarter and they fucked up the order.

I called downstairs and bitched at them. Profuse apologies spewed forth. Yeah, sure. The Californians didn’t get their complete meal. I’m sure the kitchen was in an uproar.

I was assured that the balance of our meal was on its way.

I cut the burger in half with a butter knife, nearly destroying it.

Expecting a beautiful piece of meat piled high on condiments and veggies, I was extremely disappointed at the fare.

It felt like we were at some greasy diner in Arkansas. The plate was pitiful. But food was food.

Amazingly, Butch wanted to eat. The natural appetite suppressant of the drug did not seem to cause Butch’s desire to feed his face wane. So we shared a crappy burger.

An hour later, the second burger and fries arrived. A big smile on the waiter’s face as he proclaimed, that feeling badly, the kitchen threw in some extra fries!

Life at the Waldorf was not cherries and cream.