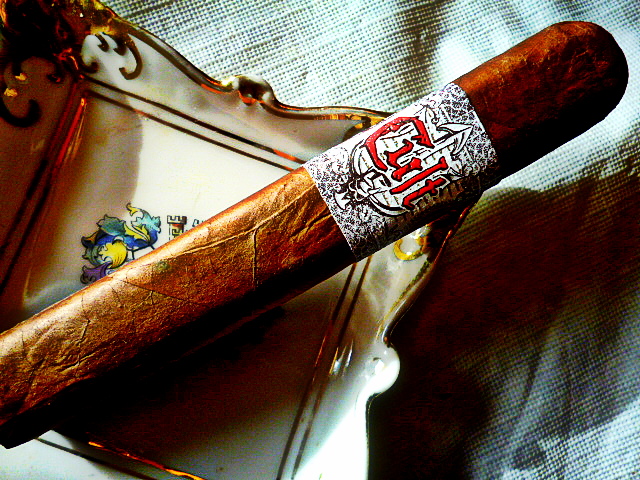 This is a brand new company developing through its mother company, Quality Imports Trading Company.  The mother company makes cigar accessories like cutters, lighters, ashtrays, you get the idea.

There is some info about the cigars on their web site, but not much else, so the history lesson will have to come at a later time.

The Classic, which I saw on CI, was a must. CI makes the whole project very mysterious. I had to Google Cult Cigars to get what info I could.

When the cigars arrived, I lit one up the same day and was extremely impressed.

The construction is solid, man, solid. It has a very sandy, toothy feel. The Ecuadorian Habano wrapper is not the color of others from the same ilk…no red tinge. This wrapper is a light tan, like Bambi’s mom. The box press is immaculate. The seams are beautiful. And the amount of small veins changes from cigar to cigar, but overall; a very well made cigar.

I do the sniff-o- rama and detect molasses and graham cracker…a bit of barnyard, some lovely milk chocolate, and some floral notes.

Time to snip and light.

Right away, there is a bit of red pepper. But the initial flavor is sweetness and pie crust…very smooth. And the char line is close to dead nuts.

A nice swoosh of creaminess brings with it some mild cocoa. The body, at this point, is mild but pushing upwards to medium.

The creaminess ramps up quickly matching the spiciness step for step. I am an inch into the cigar and it is bursting with flavor. 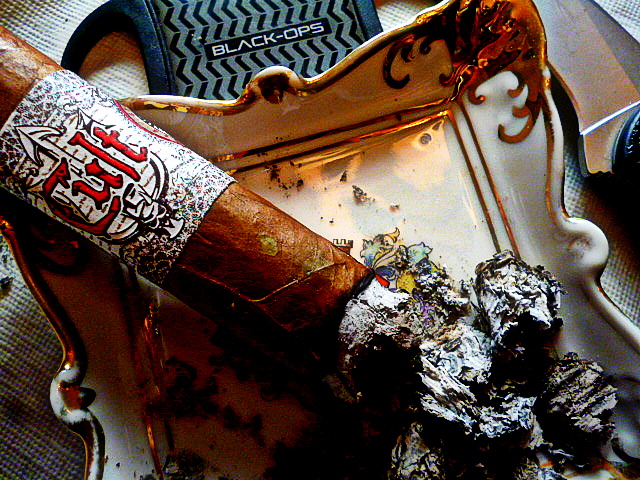 There are two other blends to this brand. Fuerte Series and Ometepe Series. The Fuerte is obviously full bodied. “Cult Ometepe is a limited production cigar containing rare tobaccos from the volcanic region in Lake Nicaragua.” And is also full bodied. Both these cigars are just about pushing the $8 mark.

The stick is packed so solid that it is a very slow burner. Yet the draw is perfect. I had to touch up the cherry, just slightly, in the first inch.

I am smoking this before my breakfast cereal because the cigar shows no danger of sending me into a nicotine spin. 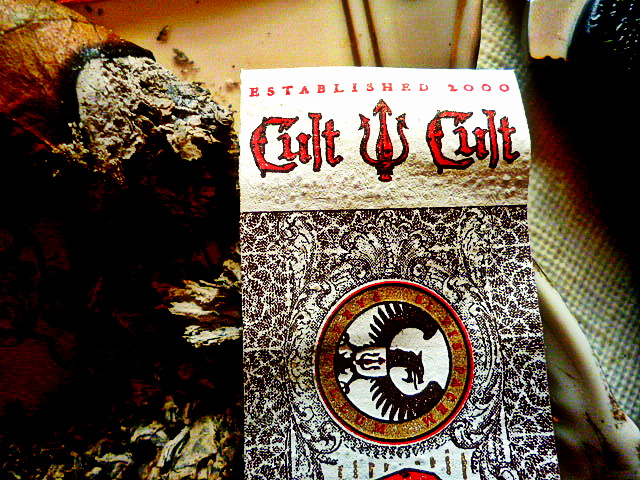 It’s a perfect breakfast cigar…but then again, I had my first one about 8pm last night after a string of cigars throughout the day. And surprisingly, while my palate had been roasted from my chain smoking, the flavors of this stick shined through. Every nuance was there….let me tell you…nuance is this cigar’s middle name…or is it the last name? Very tricky when you try to give a cigar a first, middle, and last name. Should not have tread there…

The buttery smooth pie crust flavor gets stronger. And the red pepper is making my tongue tingle, while clearing my sinuses.

The first third comes to an end. A very satisfying first third. Now on to the second….the flavors become more lavish in their desire to sweep you up.

I have to remind you here that I am smoking this cigar less than 24 hours after it came off the UPS truck. This stick is one of those rare entities that jumps out at you as soon as the cello is removed. But I’m sure, as the balance rest in my humidor, it will go through the process of settling down and then allowing the aging to make this stick into a well balanced, full of finesse, stick.

The sweetness makes me smack my lips as if I had just eaten something sweet and sticky…like hedgehog testicles. Ummm…boy. What? Another 1960’s flashback. They come and go on old folk like me.

The body begins to shift from mild to medium during the halfway mark. A citrusy component is added to the mélange. I’d say it’s orange zest.

At this point in the cigar, the flavors are just going crazy. Really. The spiciness has leveled out but the creaminess, and now, some wood and leather, and the tad bit of cocoa and pie crust are screaming, “Look at me!” Each flavor wants to be spotlighted. The cigar is slightly complex, but with flavors pumping out like this, who cares? I’m sure that complexity will come with aging in your humidor.

The second third ends in a flurry of flavor. Smoke is pouring from the foot and the draw remains perfect.

It is during the last third that the Cult Classic shows off its stuff. The flavors become muted while intertwining with each other. They are doing the great mind meld of Vulcan cigars. The stick is reading my mind and smiling.

I could easily make this my go-to cigar every morning.

The flavors during the last couple of inches are very intense. There is a new meaty flavor…very savory. The spiciness has ratcheted up until it makes my eyes water. Ha Cha Cha.

The creaminess keeps tempo with the red pepper; meanwhile the other flavors lay back…sort of a secondary flavor profile in the background. Very distinct.

All in all, this new cigar has been a wonderful surprise. Since CI is very secretive about the pedigree of the cigar, the first thing the mind does is think that some Nicaraguan guy is mixing these cigars up in the bathroom along with his moon shine.

But CI does a disservice to Cult. Instead of making them sound mysterious, they should spew the info of the blender and details about the company. But hey, that’s just my opinion.

I really recommend these smokes. In fact, these sticks will make some very nice Chanukah and Xmas gifts. But I better hurry because Chanukah started last night.

I advise that you stop reading and go buy this cigar.