From Atlantic Cigars:
“Joya de Nicaragua is one of the most celebrated brands of the last half century. To celebrate their 45th Anniversary (and Nicaragua and the city of Esteli), they created the Cuatro Cinco. This cigar, like many of Joya de Nicaragua’s cigars, is a Nicaragua puro, consisting of tobaccos from the Esteli and Jalapa regions, including a 5-year-old ligero that Joya de Nicaragua has been saving for just such an occasion. If this wasn’t already enough to make this a special cigar, the filler tobaccos were aged in oak barrels for over a year, to provide them the smoothest and most complex array of flavors. When you light one of these stogies up, you’ll get to enjoy a range of medium-bodied characteristics from notes of espresso and woodiness to hints of cayenne pepper and a creamy finish. The Cuatro Cinco is being released in a single size, a 6 x 54 Toro, that’s lightly box-pressed and perfectly constructed to provide an even burn and a perfect draw. These won’t last, so grab a box while you can!”

Press Release from JDN:
“Cuatro Cinco has been especially crafted to commemorate four and half decades of history of Joya de Nicaragua, its people and the city of Estelí, where it all started. Cuatro Cinco is an authentic Nicaraguan puro, hand rolled in Estelí with tobaccos grown in the region and in Jalapa, with a special 5 year-old ligero that the factory had been saving in its bodegas for this special occasion. As if time wasn’t enough, the filler tobaccos have been specially aged in oak barrels for more than a year to give them distinctive and sophisticated notes, and the silky smooth wrapper and binder are Nicaraguan grown in the Jalapa valley.

“We are very excited about Cuatro Cinco, for this is one of the few Limited Editions we have produced. With this cigar we are capturing the true Nicaraguan Spirit, rich in the tradition that embodies our cigars and that defines us as the archetypal Nicaraguan cigar maker, because before Joya, there was no Nicaraguan cigar. While this cigar promotes our heritage, it is also a celebration of the future and the many years we still have ahead of us. It’s been 45 years already, and we are just getting started!” stated Dr. Alejandro Martínez Cuenca, Chairman of JOYA DE NICARAGUA S.A.

“Leonel Raudez, General Manager and Head of Production of Joya remarks: “this is also a tribute to the people of Joya, the ones that went and the ones that are still with us, even after 45 years. We Estelianos are proud of contributing to make Nicaraguan tobacco among the best in the world, and to celebrate that, we have made one of the most exceptional cigars we have rolled, using our finest local tobaccos and rolled by a selected few of our talented tabaqueros. The profile of this cigar is nothing like what we’ve produced, although the richness and complexity of the Nicaraguan grown tobaccos still predominates.”

The cigars were released November 1, 2013

Cuatro Cinco limited production to 4,500 boxes of 10 cigars for the singular size of 6 x 54 Nic puro.

In a most clever vein, each box has a theme. There are three different cigar bands. One per box. The front of my cigars has the volcano erupting. The back side is a panorama view of that volcano. The first of three themes is a volcano, the second is the factory, and the third is the rolling of a cigar. Wait til I show you the inside of the band. That is where the real artwork is.

This cigar is about as Old School as it gets. I’ve had these cigars for close to three months and have wasted three sticks because they were not even close to being ready and ended up tasting like nothing.

It has been a month since I lit the last one up so my fingers are crossed that today is my lucky day. Shame on JDN producing an important, and expensive, cigar that needs God knows how long in one’s humidor before providing the blender’s intent.

I got a box from Atlantic Cigars because their price to the public is $13 less per box than the MSRP. Plus I saved even more by being a paid up VIP member…which brought the price down even further to around $11 a stick. Still…expensive. And wasting three hurts me to the gills.

Inside the box cover is a small brass plaque showing the numbered box one bought. I bought number 703 out of 4500. 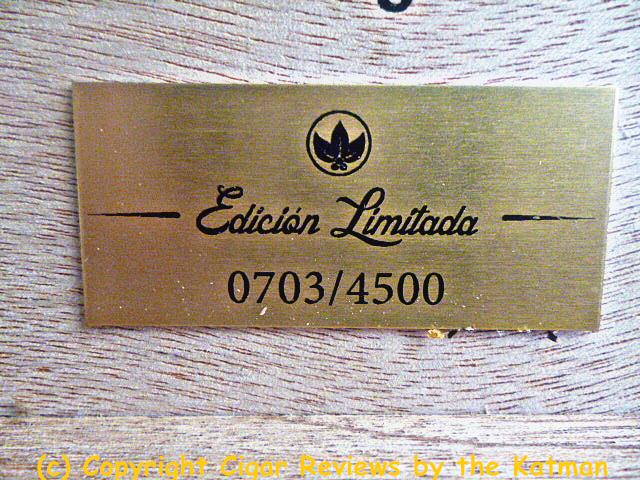 The cigar is one of the most beautifully constructed cigars I’ve seen. A very crisp box press. The wrapper is a mottled dark coffee bean color with very few veins. The triple cap is absolutely flawless. The wrapper is silky to the touch. And back to the cigar band; just stunning.

I clip the cap and find aromas of dark, sweet chocolate, clove, star anise, spice, coffee, oak and leather. There is a slight fruity note.
Time to light up.

The draw is spot on. Smoke pours from the foot and the first taste is of black pepper. Right behind is a lovely sweetness and some dark coffee. The pepper becomes very strong very fast. Thank God. If this cigar wasn’t ready after three months and I would have wasted my fourth one, I would have let the dog eat my privates.

A wonderful cocoa element appears. There are a couple of subtle flavors eluding me. There is a citrus component. But also a brown sugar flavor. And some nuttiness of course due to it being a Nic puro.

The stick is just belting out flavors. The citrus is orange but not orange zest. Real juicy sweet orange.

A very meaty cigar when the flavor of oak becomes extremely prominent. The strength starts out at classic medium.

At the half inch mark (Yes, I know. All of this has happened within the first half inch) I need a touch up of the char line. Hopefully, it stays on point from here on in.

At the 1” mark, the cigar is like Evel Knievel driving his bike through 10 hoops of solid fire.

Just past the 1” mark, the cigar is an official flavor bomb. 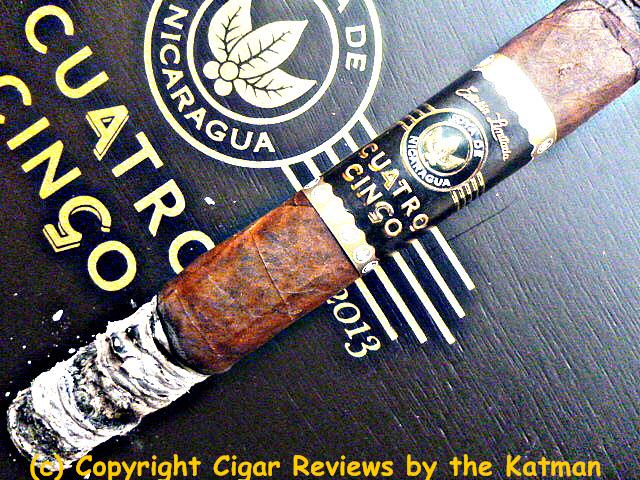 You know how one knows that he is smoking a fine, fine premium cigar? Well that is the feeling my gut tells me. There are an awful lot of more expensive cigars out there and unfortunately, an awful lot are awful. Not the Cuatro Cinco. This is a man’s man cigar.

I read other reviews chomping at the bit to review mine. And I gathered that no one waited like I did. It is frustrating having a great cigar to be waiting on the maturation process to kick in so many reviewers simply review based on potential. And thereby, miss out on the nuances and character of the cigar when it is truly ready. And in this case…that is 3 months.
I make the terrible mistake of forcing the ash from the foot. When I realize how hard that is to do, I have remorse because the ash was in no danger of falling into my lap. My bad.

A new flavor arrives…the typical Nic puro caramel flavor. It jump starts the other flavors and everything becomes very intense. 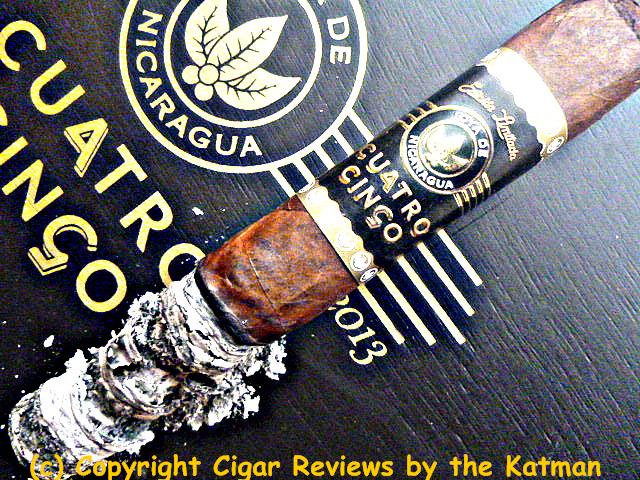 The strength remains at medium body.

Thank goodness, I still have 6 left to enjoy. I could bang my head on the wall for wasting three. But if a cigar needs three months, I believe it is the manufacturer’s duty to inform the smoker with a note on the inside of the box. You know…”To enjoy this cigar at its most flavorful, wait three months.” Or something like that.

It is not right to produce a $13 stick and make you guess. Maybe to some smokers, $13 ain’t no big deal but to most of my readers, it matters.

The flavors are burning on all 8 cylinders now. It is like cake and pie and French pastry all at once. JDN did the public a favor by selling the sticks in 10 count boxes making them affordable. I know I harp on this but join the damn Atlantic VIP club. I saved the $60 in less than three box purchases. After that was pure gravy.

Instead of grabbing a Diet Coke, I grab some bottled water so as not to dilute the flavors. Each swig sends a cascade of flavors to my palate.

I near the halfway point. “Goddam the pusher man.” This is a good cigar.

The char line is only the slightest bit wavy and in no further need of corrections.

The last third begins with the same flavors, in the same order. The only change is three things….the first being that the flavors continue becoming more intense.

Secondly, complexity sinks its teeth in. The balance is one of the most perfect I’ve smoked. The stick is chewy with an incredibly long finish. The stick is all about nuance and character. This blend certainly earns the right to be the stick that celebrates the JDN 45th anniversary. No other JDN blend comes close.
And lastly, the strength moves to medium/full bodied.

I have a good after-review story but I have blathered on so long here that I will use it on my next review: Curivari Reserva Limitada Cafe Noir. The 10th and last of the Curivari blends that I have reviewed.

Time to remove the cigar band.

There is a secondary band underneath the main band.

On the back side of my cigar band is the panorama of an exploding volcano. 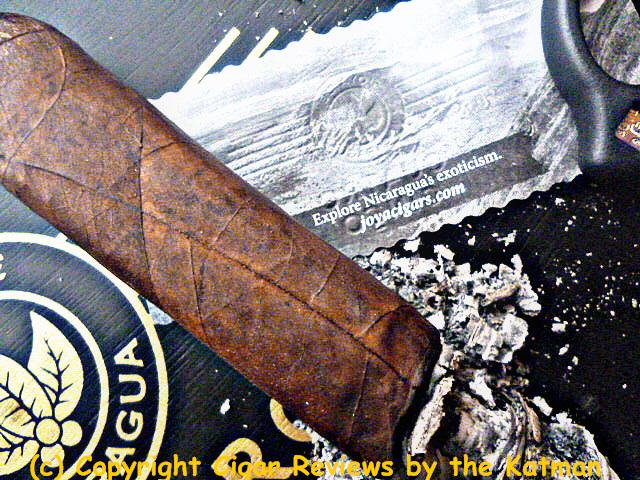 In my humble opinion, the difference between a premium cigar and a high premium is that flavor bomb status begins almost from the beginning. Thereby allowing you to taste every nuance the cigar has to deliver. Changes are only slight as the kitchen sink has been laid bare to your palate from the get go.

So while I have no changes to report, the cigar is just bursting with flavor and balance.

My ash theory backfires on me. I had a huge chunk of ash fall right into my lap. 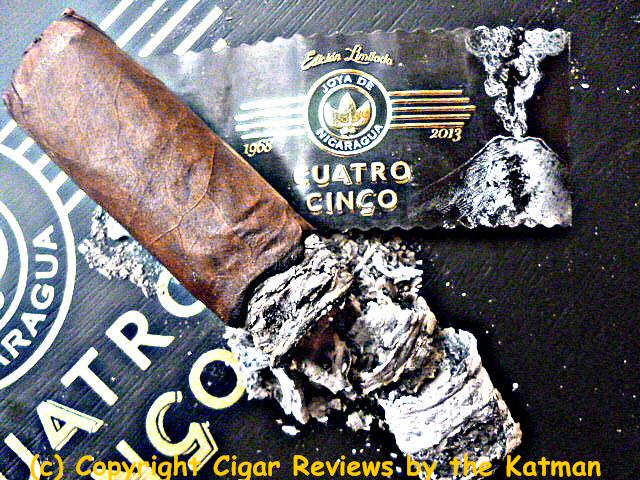 While I normally prefer not to smoke cigars this large, it has proven to be the perfect size for this blend. Of course, had it been smaller, I would not have had to wait 3 months.

The cigar finishes out like a good time at Disneyland. Flavors literally explode on my palate. The spiciness returns in full force. The last couple of inches sees the nicotine kick and it is impressive. And I am on Mr. Toad’s Wild Ride. My thinking process slows down. My motor skills go to shit. And my vision is blurred. The smoking process slows down real fast. I am super sensitive to nicotine as I have not smoked a single cigarette in my life. I should be in Guinness.

If you have the patience, you need to drop a C Note+ on this cigar. Don’t fool around with buying singles. Get the whole box.
My hat is tipped to the folks at Joya de Nicaragua for producing a cigar of momentous proportions.

UPDATE 3-29-2014:
Only a week after writing this review, the cigar continues on its upward trajectory of becoming one of the best cigars I’ve smoked. It is absolutely fantastic. Unfortunately, massive amounts of patience is a big requirement with this blend.