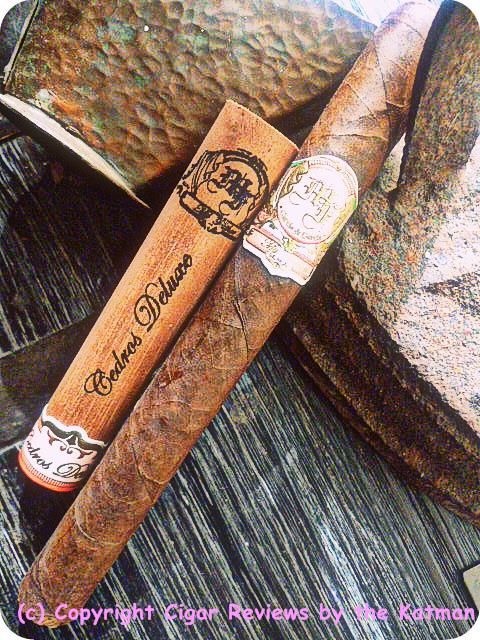 One of my all-time favorite blenders is Don Pepin Garcia. And yet, most of my reviews of his cigars are on other blogs. At the most, I have 4 or 5 of his cigars on this site. Shame on me.

The other reason I chose this stick is that is terribly cloudy and dreary outside due to the rain storm we had last night. And without the sun, my cheap shitty camera ain’t worth a crap. So I apologize. I figured you all know what a My Father cigar band looks like.

These sticks were released in 2012. So, late to the party once more.

I picked the cedar wrapped Cervantes because I can’t remember smoking one. I’ve smoked plenty of My Father cigars but this one seems to have eluded me.

Here is an inside look of the Milwaukee cigar scene. I have a nice B & M near my home. If I go in, I will try to buy some My Father sticks because they are very reasonable at around $6.50 each. And then they disappeared for good. Why? I asked the owner. No one was buying them. I laughed with my most sniggerly laugh. The owner told me his clients were not into Pepin Garcia. They preferred Rocky Patel. So there you go. I live in a hellish wasteland. And the really good B & M’s closed their doors a couple years ago because of the recession.

Once the cedar wrap is removed, the stick reveals itself to be very rustic. Lumpy and bumpy. Very few veins. Invisible seams. Beautiful cap. And the wrapper is a very oily dark chocolate brown with reddish overtones, that feels very smooth.

I clip the cap and find aromas of dark cocoa, citrus, cedar, sweetness, and floral notes.
Time to light up.

The first puffs are quite nutty. And the cedar wrap has done its job of creating a warm bubble bath of cedar flavors. Lo and behold: The famous blast of Garica pepper arrives to disintegrate my tongue. 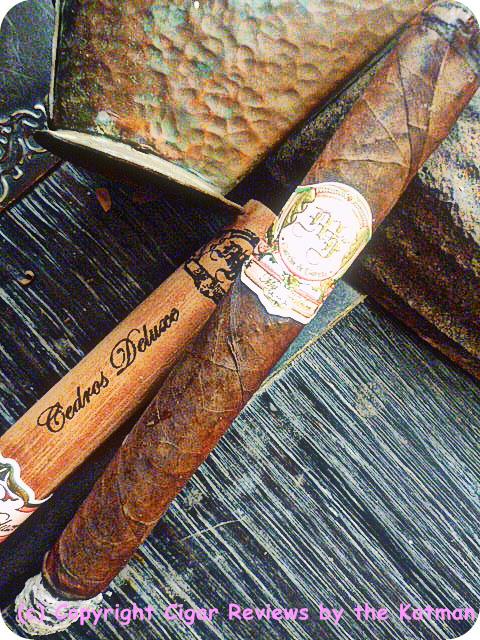 The draw is perfect. Smoke forms a Jew fro on my head. White this time as it is appropriate for my age. There is a wonderful floral aroma as the cigar burns.

Seriously…(What? Me Serious?) The cigar is already a flavor bomb. I like Lanceros or Lonsdales or whatever the hell you call them. The flavors don’t fool around and get right down to business. 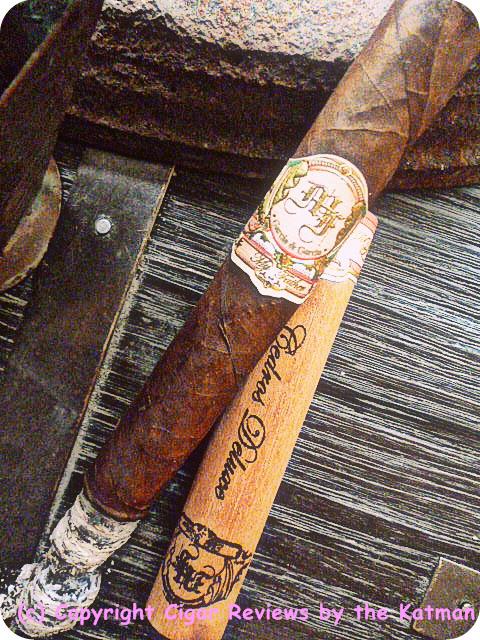 Truthfully, there is no reason to review a My Father cigar. Word of mouth takes care of that.

As far as I’m concerned this is a great example of a perfect cigar. Body, character, balance, finish and a boat load of flavor. With that spicy kick and full bodied bounce.

I’ve been saving this cigar for a month. The nice thing about anything by Garcia is that they only need a week or two if you are impatient and you aren’t punished and forced to dump the cigar.

The second third begins with no changes except for the sheer intensity of the flavor profile.

The spiciness does drop back a couple notches but other than that the cigar is perfectly balanced and very complex.

I am at the halfway point and the strength surges to full bodied. My head is swimming. Holy shit. The nicotine went from 0-60mph in 4.2 seconds.

My shaky hand grabs the Diet Coke next to me and I take a few wobbly sips. The laptop screen blurs and I feel faint.
I want to lie down. It feels like I’m counting backwards while the anesthesiologist is pumping shit into my veins just before the colonoscopy.

I make it to the last third and here are the flavors: Creamy, sweetness, oak, cocoa, coffee, spice, fruit, cedar, and floral notes.

I stop and force down a bowl of cereal. Clearly, this is not a cigar you smoke on an empty stomach.
My vision returns.

The cigar finishes out beautifully even if it is kicking my ass with nicotine.

While cedar was strong upfront, it kept moving towards the back of the line as the stick burned down. 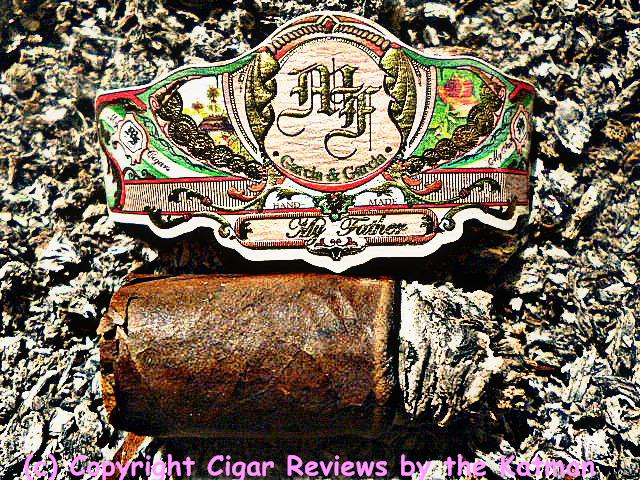 After joining Curved Air, I had to learn 15 songs from their repertoire for the upcoming tour in which a live album would be recorded.

The problem for me was that this was a progressive band. Classically trained musicians and the songs were not 1-4-5 like the blues. They were complex numbers that I had less than two weeks to commit to memory.

At the time, I hadn’t heard of the band and had no idea how famous they were in Europe. So I figured a hidden music stand with my charts would help me in a pinch on stage.

Because they liked the funky way I played the bass, they allowed me quite a bit of freedom. But time signatures and chord changes were rampant in each song. They did have a Top 10 song called “Back Street Luv.” The easiest of the tunes to play of course.

Management rented out a rehearsal space in Covent Garden. Which was the vegetable district for farmers to bring their produce for restaurants.

We had four hours every day for 8 days. I had never seen people take so many tea and biscuits breaks in my life. I was struggling and they were fucking around. I was scared shitless.

We’d go over one song, once, and then move on.

And then a guy walks into the studio and sits down next to the chick singer. He is carrying a bass case and opens it. It is a paisley Fender Telecaster and begins to change the strings while kibitzing to Sonja.
I take a huge gulp and think that my replacement has just shown up.

We took a break and I was introduced to the guy who happened to be the original bassist for Big Brother and the Holding Company. He was in England for some reason and knew Sonja and just decided to drop in. Whew.

The non-rehearsal rehearsals went on for the rest of the allotted 8 days and I was learning nothing.

We were chauffeured to the first gig. I thought it would be a club. As we approached London Arena, I panicked. I began asking everyone in the car where were we? What were we doing here? No one answered or even paid attention to me.

I stood on the mammoth stage with the huge sound system and all the stage lights and looked out into the audience seats. It held around 8,000.

I saw how they set me up on stage. There was no fucking way I could hide a music stand. No fucking way.
I barely knew the songs.

We did a 45 minute sound check. I used the music stand. No one said anything.
I placed my charts on top of my gigantic amp rig.

Long story, short….I got through the night without playing too many clams. Anything I played was still in the key for the song and only sounded like I was playing a harmony.

The band didn’t notice and neither did the 8,000 screaming fans.

Besides, they were all concentrating on our sex symbol singer. I could have played “Twinkle Twinkle Little Star” and no one would have noticed.

We had a concert in Nottingham the next day. I spent the whole travel time hunkering down with my charts. Back then, there were no IPods and I had to do this with the songs in my head. I was sweating like a pig.

Three days later, the recording of the album began. It was done over two consecutive nights. And magically, I forgot about the recording truck outside the arenas. And I played my ass off.

During the mixing of the album, I discovered that I played very well. And got lots of compliments.

The managing director of BTM Records said in the studio, “Well, I guess we all know who the star of the album is..” as he looked at me.

The prima donna band put on sour faces that could kill. This was the first step in my downfall that would occur two years later. I was outplaying these fine musicians and they began to hate me for it.

Yeah, I was kicked out for political reasons but I had the time of my life. I had made the big time and sucked every moment out of it.