I sometimes forget that I reviewed some great cigars for others and do not show up on my current blog. I’ve written for so many online stores that I get a little brain farty.

The Casa Fernandez Arsenio 2009 is named after Arsenio Ramos. He is the chief bouncer for Tabacalera Tropical….a strip joint designed for men over 80. It also has a full nursing staff on hand.

This cigar differs from the other Casa Fernandez blends by the huge amount of ligero in this blend.

I’ve been a fan of Casa Fernandez for a long time. It is a solid boutique brand. And they have always kept the price point at an affordable range.

Cigar Federation has 6 of the blends all at a nice price point. Ranging from $7-$12 a stick.

The stick is in the nether world of being neither nice looking nor a piece of shit. Somewhere in the middle.

It is lumpy and bumpy. Lots of veins. Seams are sloppy. The cap looks like a 13 year old Collie applied it. (Laaaaaassie!). It is only slightly oily and feels very smooth. The wrapper is the color of butterscotch.
I clip the cap and find aromas of sweet caramel, coffee, cocoa, cedar, and barnyard.
Time to light up.

Draw is good. The first puffs are bland. Smoke fills the room. The first flavor is plain ol’ wood.

The char line tries to make a run for it immediately and canoe on me. I’ve had this stick for 2 months and was a gift. I was told it had several months of humidor time on it when sent to me.

Sweetness appears. As does some red pepper. It has earth notes. The caramel comes through now. So does creaminess.

Writing every day, and smoking all day, exposes me to lots of different blends. After a while they all merge into one blend.

The flavors I taste now I’ve tasted in a gazillion other $7 cigars. It’s good but far from unique. There are so few really unique cigars out there even though the young sprouts are blending like crazy.

Nicaraguan puros are becoming a parody of itself. They have become so popular that you just aren’t “in” if your cigar doesn’t come from Esteli.

The flavor becomes very salty. At the 1” mark, the char line evens out. 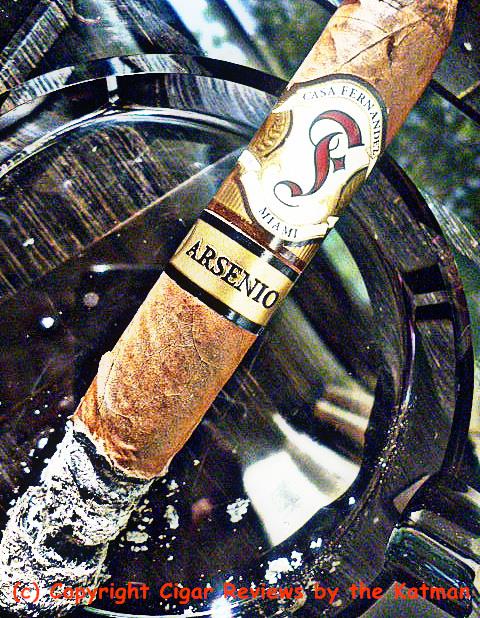 Here are the flavors: Creaminess, red pepper, earthiness, caramel, sweetness, coffee, cocoa, salt, and wood.
In my eyes, Casa Fernandez has become lazy. Yeah, they have a couple very good blends but they are in no rush to bring out bigger and better cigars. Their blending talent seems to have stagnated.

Two opposite examples are the MoyaRuiz boys who went from La Jugada Prieto and Habano to the Nunchuck. A massive quantum leap.

Then there is Arandoza Cigars. From the White and Blue Label to the Red Label. One more quantum leap.

What are the Illusione, Carrillo, Pete Johnson guys doing? We used to fight for their stuff. DE hasn’t impressed me with much of anything lately.

The char line goes rogue on me once more as the first third ends. If I don’t fix it, it will go wild canoe on me.

The cap began to succumb to my drool almost immediately and I have had to clip it.

Little bits of wrapper are disengaging themselves from the shaft. About a month ago, I was sent a 5 pack of these sticks. Four of them came apart. A real mess. Laziness on the part of Casa Fernandez.

The strength is more mild/medium than medium bodied. I have no idea when the oomph is going to kick in.

The cigar is flavorful but something unknown is keeping it from becoming a flavor bomb. It might just be me. I’ve tasted this flavor profile so many times that it becomes rote.

Some citrus appears. Offsetting the sweetness a bit.

My Medicare Part B kicked in just in time. For the last 3 months, I’ve been experiencing excruciating pain in my thoracic region. Went to the doctor and it seems that a couple of my 5 herniated discs have probably ruptured. I am in so much pain that as I write this all I can think of is tears of a clown. Fixing it may require major surgery. When it rains, it pours. LOL. Charlotte is having surgery this Tuesday so I won’t be reviewing that day. Will let you know how it went.

This blend is oh so pleasant. The strength begins to climb. It is a tad bit stronger than classic medium body.

The char line seems to have finally mellowed out.

As this cigar is not jam packed, it smokes quickly. With 2/3 of the cigar under my belt, I’ve invested 40 minutes. And that includes the writing of this masterpiece.

And with the new location of the burn, I must give the cigar its props and declare it a flavor bomb.
The last third begins.

Of all the Casa Fernandez blends, the Arsenio is the red haired step child. A good cigar, except for construction, but not up to par with the other blends.

The cigar goes out on me. Go figure.

I jinxed it. The char line needs another correction.

To be perfectly honest, if this cigar’s price point were more than $6.50, I would go medieval on it. There is no excuse for consistently bad construction.

The cigar meets its end with all the listed flavors intact. The strength remains at just a touch over medium body.

Near the end of the cigar, I get some bitterness. And the wrapper begins to unravel.
A perfect end for an imperfect cigar.

Time to put it down.

I would love to recommend this cigar but the construction issues keep me from doing that. 1the 35th Aniversario, the Aganorsa Corojo and the Maduro, and the Miami Reserva are all better choices. 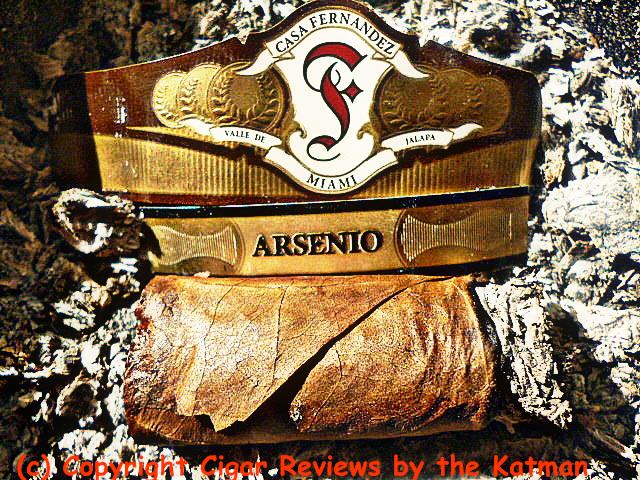