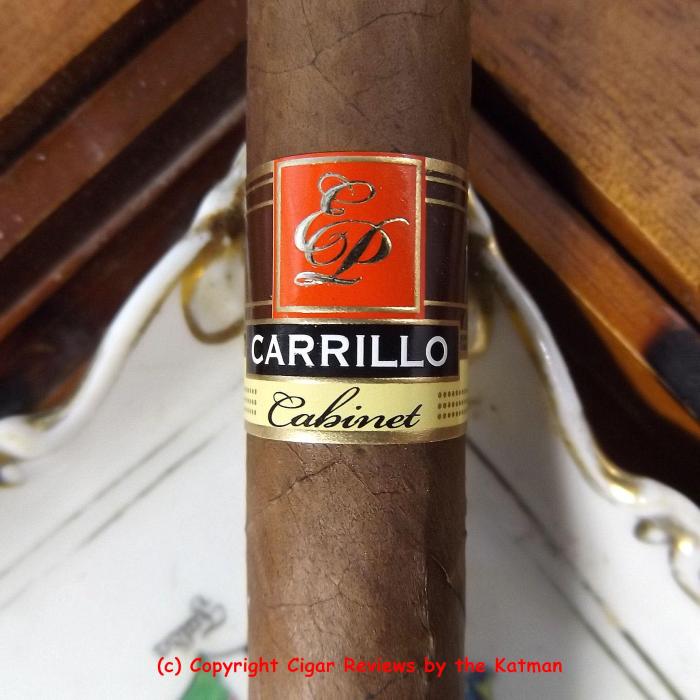 Today we take a look at the E.P. Carrillo Cabinet. This is the most recent release from the Carrillo team.

The cigars are manufactured at Tabacalera La Alianza S.A. factory in Santiago, DR.

It appears to be a limited run but it seems every store online has them. This blend was designed to be shipped to Europe for our NATO allies to smoke. Only 200 boxes were sent. That won’t go far.

From Cigar Aficionado:
“The EPC Cigar Co. first broke into the European cigar market two years ago, and now company owner Ernesto Perez-Carrillo wants to show his appreciation to retailers there in the best way possible: with new cigars.

“New Wave Reserva and E.P. Carrillo Cabinet debuted at last weekend’s InterTabac tobacco trade show, held in Dortmund, Germany, and they are slated for release in Europe in October. Perez-Carrillo confirmed that the new lines will appear in U.S. cigar shops later in the year.

“The company also showed off the new E.P. Carrillo Cabinet, a medium- to full-bodied cigar that uses the same Ecuadoran Habano Corojo ‘99 wrapper used on the company’s new Inch C-99 line. The rest of the blend is a Dominican Republic binder and filler tobacco from Nicaragua. Four sizes of Cabinet—Robusto, 5 by 50; Toro 6 by 52; Supremos Extra 5 7/8 by 56; and Wide Toro 6 by 60—will be packed in 25-count boxes and retail from $6.30 to $8.30. Like Reserva, only 200 boxes of Cabinet are being initially shipped.

“The new E.P. Carrillo Cabinet is a medium- to full-bodied cigar that uses the same Ecuadoran Habano Corojo ‘99 wrapper used on the company’s new Inch C-99 line. The rest of the blend is a Nicaraguan binder and filler tobacco from the Dominican Republic.”

I bought two sticks. Haven’t smoked either. Both are rustic in that they have some pretty large veins. The seams are a bit sloppy. But the triple cap is nicely done. The wrapper is almost sienna brown with only a tad bit of oiliness. It feels very toothy, but almost microscopic. Don’t know if it will show in my photos. Both sticks are very lopsided.

I clip the cap and find aromas of potent spice, chocolate, earthiness, wood, and nutmeg.
Time to light up.

The draw is good. Even though there is a major soft spot in the middle of the cigar. And from the cap down to 1-1/2” is jam packed. Almost hard.
Spiciness is the first thing noticed. Red pepper. Followed by wood and rich earthy elements. At this point, it tastes more like a Pepin Garcia cigar than a Carrillo blend.

I’ve had these two E.P. Carrillo Cabinets resting for nearly a month. 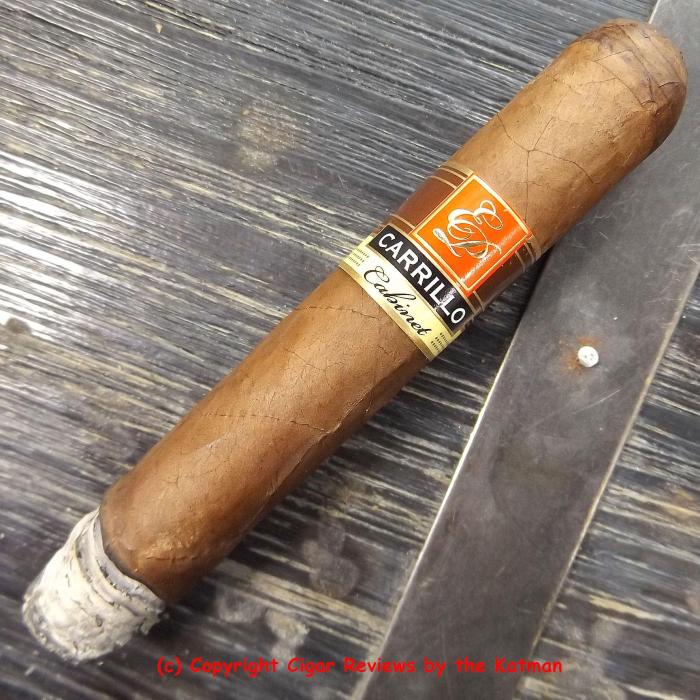 I think that Carrillo, a master blender, should be putting out more blends than he is. I know he is an alta-cocker but still…..

I check my news source and all it says that at the 2014 IPCPR trade show, Carrillo was indeed prolific with new blends. Like the C-99 blend for the Inch line, the Perez-Carrillo La Historia line, the 5th Anniversary, the Tuxedo Sampler, and Dark Rituals for CI.

New flavors show up at the 1” mark: coffee, cream, something fruity (Like Kevin Esser), and a smoky meaty flavor.

Cedar joins the group and almost moves to the front of the line.

There was a big transition from the start of the cigar to the 1” mark. I wasn’t impressed with that first inch. But now things have kicked in.
A nice nutty combo appears: hazelnut, cashew and almond. And a slight marzipan element.

But this is not a sweet cigar. The elusive fruitiness is about as close as it comes. I know this sounds ridiculous but one cigar after another with similar flavor profiles becomes boring. Candy bar flavor profiles are overwhelming the market. Or at least in the 40+ cigars I bought for review. I tried to pick a nice spectrum. Still a good 25 blends to go.

The red pepper has stayed with the smoke from the start. I dislike cigars that see a big bang spicy start and then fade into oblivion within minutes.
The second third begins.

In spite of what I consider lackluster construction, the E.P. Carrillo Cabinet has held up nicely. A slightly wavy foot but no need to touch it up. The cap is hanging tough.

Sweetness invades Poland.
And the fruitiness has a grape overtone.

Strength moves to a tick above medium.

The price point. Apparently, it is price fixed. Everyone that carries it online is charging the same $6.30.

With 3” to go, another transition appears. Flavors are bolder and better character.

The lineup has changed: Creaminess, smoky, spice, cedar, chocolate, earthiness, coffee, leather, nutty, and that “It” factor that just comes with a nicely blended stick. For me, it is complexity. Flavors meld together and get scrambled…causing new Frankenstein-like flavors that are indescribable.
Now I am very impressed with the E.P. Carrillo Cabinet. It finally develops a long finish. The balance is perfect. And loads of complexity.
The cigar is behaving magnificently. Especially compared to some cigars of late that just fell apart on me.

Caramel and sweetness appear for the first time changing the profile.

The E.P. Carrillo Cabinet is delicious. It is as if the cigar was served up as a multi-course meal.

The 5 x 50 is the smallest size available. Everything else is big. Carrillo should have blended a Corona or a lancero. Who knows? Maybe they will come later.

It is oozing flavor and character. It never ceases to amaze me how a cigar can start out ordinary and then turn into something very special. There was a nice gradation of flavors that built upon each other.

And it turns out to be the sweet spot of the blend. 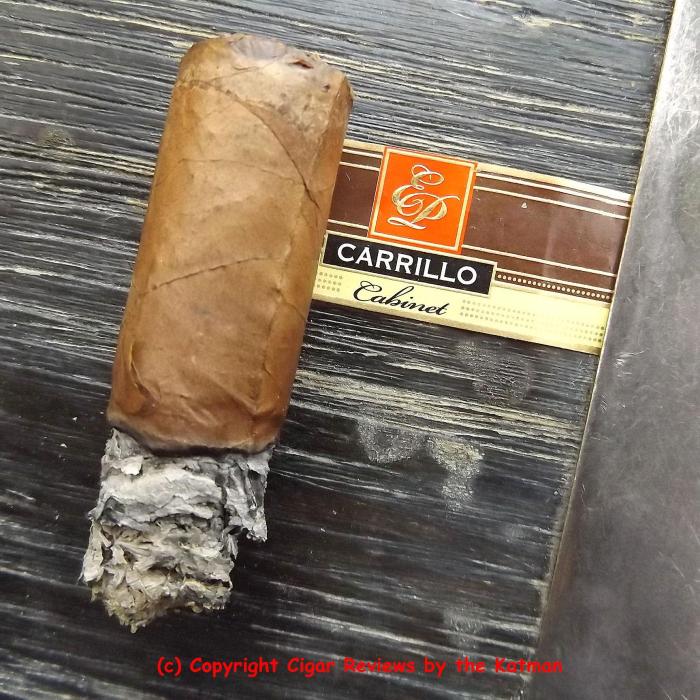 Despite all the construction issues I pointed out earlier, the cigar has behaved like a champ. No touch ups required. No clipping of the cap. And even more importantly, no wrapper issues. So the proof is in the pudding. My humidor works just fine. And the trouble I had with certain cigars for review was the fault of the cigar, not me.

I definitely recommend trying this cigar. The cost is perfect. No greed issues here. The construction show itself to be solid. And the flavor profile had a broad spectrum with a nice complexity, balance and finish. 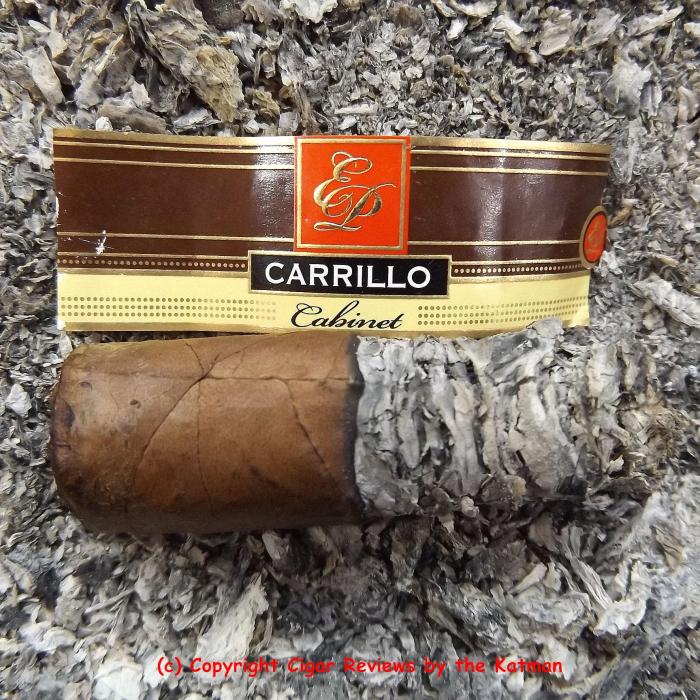 I’ve told this story more than once so I apologize to long time readers.

It was the first gig in London. And the first gig of the tour. Where we played in London escapes me. But it was huge. At least a 20,000 seater. And we sold out in hours. This was to be the first time Curved Air had played together in over two years. All the original members were there and only I was the new guy: the bassist.

So I talked to our sound man and made it clear to him that I want every note I played to be heard. He smiled and nodded.

We were in the dressing room before the concert. Darryl had just done his pre-concert ritual of puking. And because it was London, lots of hanger ons filled the dressing room. All those important folk.

I barely knew the band. I met them at the audition. I rehearsed with them for two weeks at Covent Garden rehearsal studios. And then here I was. About to play for 20,000 people and I barely knew the songs.

The band had already put out 6 or 7 albums by then and the original members knew them by heart and without any strain.

Me? This was a progressive rock band. Something akin to Jefferson Airplane and It’s a Beautiful Day. We had electric violin. We had a mad scientist on the exotic synthesizer keyboards. And the chord structure of the songs weren’t no 1-4-5 blues changes. Very difficult to learn.

And since, they didn’t feel much like rehearsing, they spent most of the time at Covent Garden drinking tea and eating scones and biscuits.

I spent countless hours at home with their records learning my parts. Every single song had a definitive bass line that was important to the song.

About 30 minutes before show time, Sonja asked me to follow her to the bathroom. As I did, there were hoots and whistles from the crowd in the dressing room.
I was shitting myself.

She asked me to help her change into her fancy stage gear. She disrobed totally in front of me and I must have turned 7 shades of red.
What she was trying to do was show me the tracks on her arms.

She was a recovering morphine addict. And no one in the band knew about this. She had burdened the band for years with her habit and she promised she would be straight for the tour.

It turns out that I would be her sole confidant. She was on methadone at the time. Shooting up 3 times per day. This was all new to me. My drug experience was smoking herb and that’s it.

She told me that I would have to take care of her on the road. To make sure she took her shots at the right time of the day.
My heart sank. I thought this was going to be so much fun and now I learned I was a babysitter.

Stewart Copeland was not in the band yet. So he became our road manager. But that lasted about 20 minutes because he didn’t like taking orders from the super arrogant Darryl.

Stew was also living with Sonja at the time so he was privy to what was going on.

The next morning, we boarded a train for Northern England. An 8 hour trip.

As Stew, Sonja and I stood on the train platform, I got bad news. They forgot to renew her prescription for methadone and I was told there might be some problems on that long train trip. And to make sure that the rest of the band didn’t find out about this.
Ov vay. 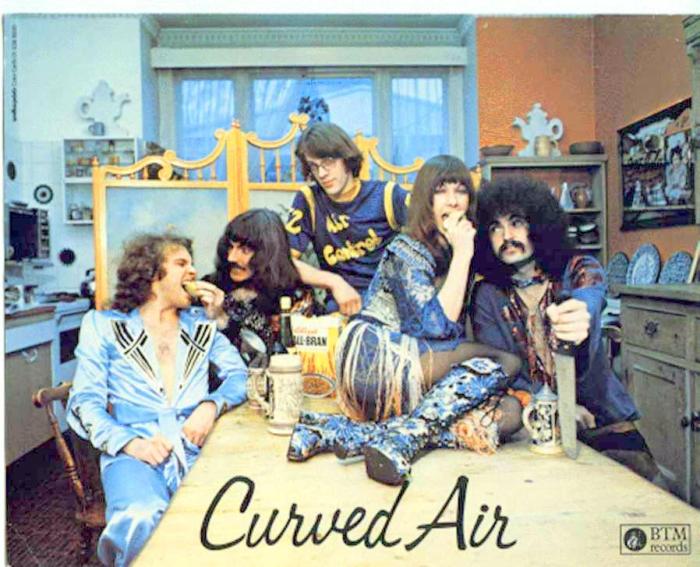 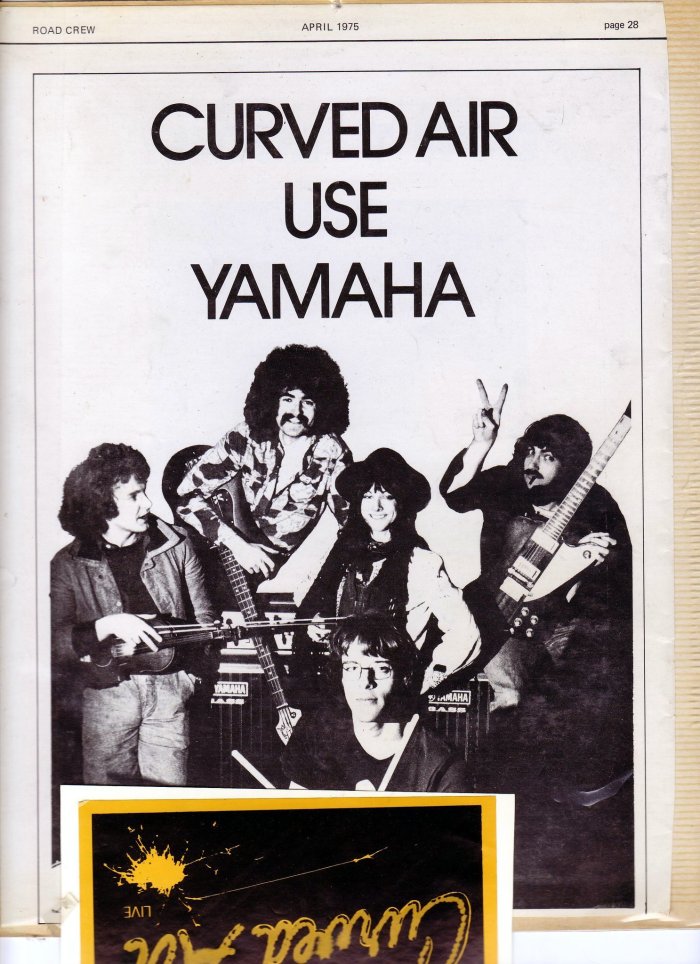 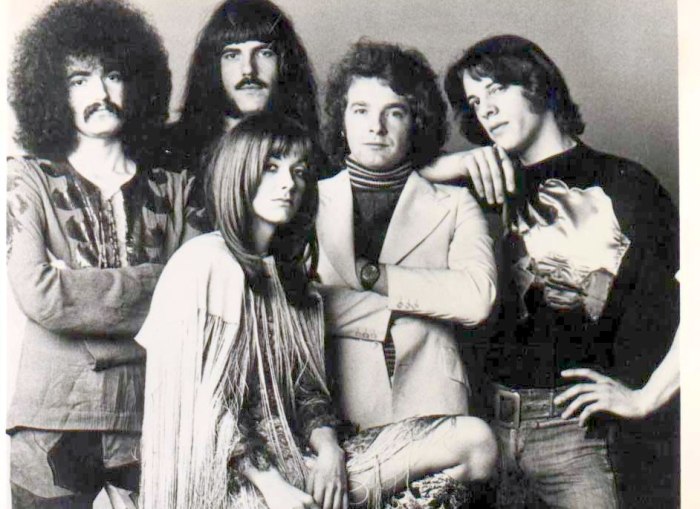