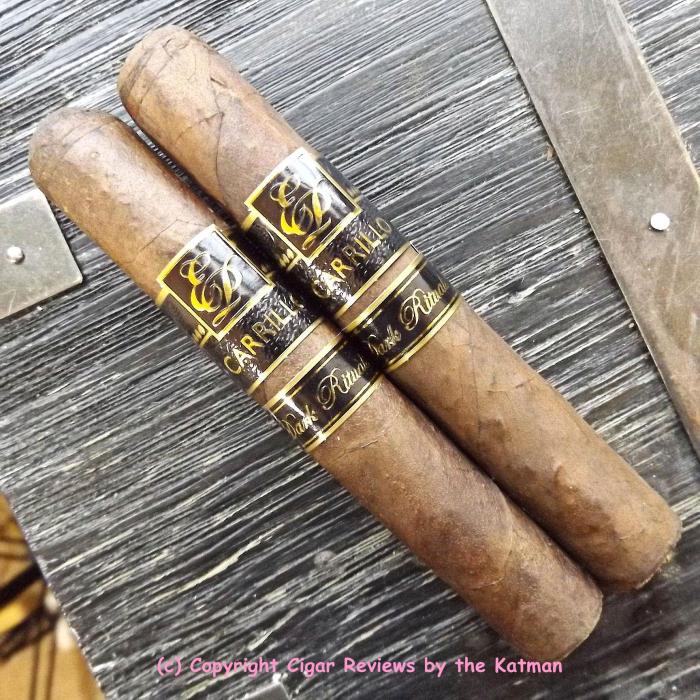 Today we take a look at the new E.P. Carrillo Dark Rituals.

It appears that Carrillo blended this cigar exclusively for the CI Conglomerate.

The Dark Rituals made its original debut at the Cotillion Ball in a different dress back in 2011 as part of the Carrillo Edición Limitada line. Everyone loved it and then it was gone. So, now this it. The Phoenix rises.

There is no interesting story or background info on this blend as is usual for most house blends.

First, this is a rough looking cigar. It reminds me of a Rum Soaked Crook. As it is lumpy and bumpy and about as far away from being a round cigar as possible. It has dents like a car that has seen its last legs in the Destruction Derby. Seams are sloppy. A whole lotta veins. It appears to have a double or triple cap.

Based on the appearance, I can say, without equivocation, that there was no love in building this cigar.

This is a budget friendly cigar with a fancy double cigar band. Which is also a pain in the arse to photograph due to the shiny gold lettering on a shiny black background.

I clip the cap and find aromas of barnyard, hay, chocolate, spice, herbal notes, and wood.
Time to light up.

The draw is tight as was the one I smoked last night.

The flavors are somewhat muted at first and then a couple minutes in red pepper blasts away. Following that is chocolate and strong cedar. A generic sweetness surrounds the flavor profile. Then the always welcome creaminess.

Right off the bat, the strength is medium+ body.

The tobacco is the star of the show at the moment. The rich soil and minerals make their presence known.
Coffee ensues.

Surprisingly, the char line is on the money. Based on the E.P. Carrillo Dark Rituals’ appearance, I expected the worst.

Another flaw in the mix. The distribution of tobacco is uneven. It is jam packed in the top half and large soft spots in the bottom half. In fact, it is spongy. Dry boxing it overnight may have helped this but our house is so cold at night that it would have done more harm than good. We don’t have the massive pile up of snow like back east but we have the subzero temps and wind.

“The Sky is Crying” by SRV is playing in the background. Yeah….

This is by no means a bad cigar but you’d have to be psychotic to spend $10 on this robusto. Even $7 is too high. Stick with Cbid and get your money’s worth.

I mean, who knows how this blend came together. It is an absolute mess in its presentation. No care was given to the rolling whatsoever. The cigars are so out of round they are almost box pressed.

The E.P. Carrillo Dark Rituals has a pleasant flavor profile. But it is like every other generic quality premium house blend out there. One just gets the sense that this blend is some leftovers that they were accidentally feeding to the cows on Carrillo’s farm.

Now the 2011 version was something special. This blend is an insult to that blend’s name. Replace an Edición Limitada high premium with a run of the mill house blend.
Shame.

If the E.P. Carrillo Dark Rituals stood on its own instead of the shoulders of its forbearer, this $4 cigar is great. I checked Cbid and there is only one 5 pack available.

The stick is ultra-creamy. This is its winning element. I can find no complexity as it approaches the hallway point. Not much balance either. But it does have a pleasant long finish.

Despite the atrocious look of the cigar, its construction is hanging tough. The char line is behaving. No loose wrapper or seams. And the cap can handle the Katman’s chomping.

Still, as the halfway point is reached, there is no real transition of the flavors. Creaminess, chocolate, coffee, spice, sweetness, graham cracker, and wood maintain their vigilance but without flare.

While not an unpleasant cigar, I was definitely hoping for more than it can give. I should have known considering it is a house cigar. Name all the house blends that have knocked the wind out of you. All you have to be is a three toed sloth to complete that task. The generic quality of this blend can be found in thousands of no name cigars.

The first half took 35 minutes to complete.

The creaminess, along with the other flavors, flattens out.

Maybe one of the CI online companies had a sale on these already. If they haven’t and plan to; don’t pay more than $4 per stick. I see a 10 pack for $39.99 in its future.

The burn line needs its first touch up.

The E.P. Carrillo Dark Rituals is a very ordinary cigar. Nothing special about it.

Would I buy it again? Probably not. I have a giant list of cigars: “The Katman’s List of 121 Great Cigars in the $5.00-$6.50 Range.” Every cigar on that list is much more interesting than the E.P. Carrillo Dark Rituals. 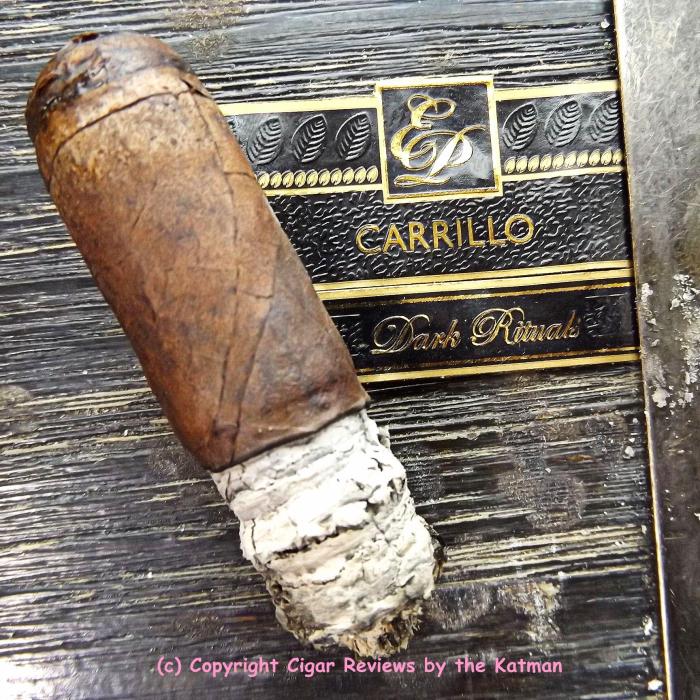 But then I’ve never found Carrillo to be a consistent blender. He can come up with some fantastic blends and then follow up with something ordinary.
If not for the review, I would have put the cigar down by now. But I want to see if the last third blossoms.

And it does. But in a conservative manner. The ultra-creaminess returns. So does the chocolate. A small amount of nuttiness and toastiness appear for the first time.

Still, there is no complexity. And the balance is minimal. Even the finish has shortened. And harshness adds the cherry on top.

It seems kind of underhanded to me to base a new blend on an older one that everyone loved. And that follow up is a real disappointment. What the Carrillo and CI camp don’t realize is that there might be a surge of buying at the start of the release but then word spreads that the E.P. Carrillo Dark Rituals is nothing more than a yard ‘gar. And like the 2011 version, it disappears into the wind. But for different reasons. You watch. In a few months, the cigar will be a close out and the price will drop dramatically.

That’s all I have to say about the E.P. Carrillo Dark Rituals.

ADDENDUM 3-19-2015: AFTER TWO MONTHS+ OF HUMIDOR TIME, THE DARK RIUALS HAS TURNED OUT TO BE A MUCH BETTER CIGAR THAN MY OPINION IN THIS REVIEW. MY APOLOGIES. I MADE THE MISTAKE OF FORGETTING THAT CARRILLO BLENDS TAKE A WHILE LONGER THAN MOST CIGARS TO BLOSSOM. OLD SCHOOL.