Today we take a look at the Lost & Found Racks on Racks.

Supposedly, 3000 cigars were produced. Cigar Federation is selling them in packaged mazos of 8 or a 4 count package. L&F made these, or should I say: “Found these” cigars and providing them only to Cigar Federation.

If your score card of company names is correct, it should read that the series of events has been; First: Impromptu Cigars, then Second: Bellatto / Caldwell / Sears; And Finally: Lost & Found.

The story goes that the crew went searching through the factories of the world looking for vintage cigars that were never released and snagging them all up for your smoking pleasure. They gussied up the packaging with cute or obscene art work and charged a fortune.

Of course, many of them just turned out to be old Camacho cigars. I can’t speak for the Racks on Racks. Other than to say the PR says that the Racks on Racks is a cigar made in 2011 and released last month in May.

Lost & Found has been a busy bee as this blend is their 10th release in 2015.
I got a single Racks on Racks because I am a member of CF and purchased their Cigar of the Month Club pack. Sometimes it is 5 cigars. Sometimes it is 6 cigars. The rate is $39.95 per month. As a member, I get 10% off (Membership is free) which brings it down to $35.95 and no shipping fee. I’ve found this to be the best COM club around. And I’ve tried them all.

DESCRIPTION:
First thing you notice is that Lost & Found saved a couple shekels by not bothering to give the stick a cigar band. So, as a result, the cigar really has no cache. It has no cello.
The wrapper is a half and half medium brown with a touch of pumpkin in bright sunlight.
The stick is solid. Seams are tight. Veins are few. The pointy belicoso cap is gorgeous. And the cigar is dead nuts perfectly round.
There are a couple of large tree trunk veins running the length of the cigar. And the cigar feels smooth as silk.

AROMAS AND COLD DRAW NOTES:
The shaft smells of a wonderful sweetness. There is honey, chocolate, and spice.
The clipped cap and the foot provide smells of strong wood elements, chocolate, spice, sweetness, and earthy tobacco.
The cold draw provides a continuation of strong wood. A bit of dark cocoa and black pepper.

FIRST THIRD:
The draw is nice. First flavors are: Sweetness, earthiness, cocoa, wood, spice, and some nice herbal notes. The type you put on a roasted chicken: cumin, salt, oregano, basil, and a touch of garlic.

The Lost & Found Racks on Racks starts slowly. Flavors are minimal and more of a tease than a..what did Caldwell say? Oh yeah..”A bitch slap.” Maybe my bitch slap is waiting for me later.

The burn line is wavy.
Huzzah! The sun came out.
Strength is a solid medium body.

Spiciness moves its way to the front of the line. The sweetness is still the most powerful concoction of the flavor profile.

3/4’” in, I get some nice toasty and nutty flavors. The wrapper seems to be very thick…therefore, providing a lot of the flavor. A lot of the Lost & Found blends don’t divulge the leaf stats. But they did so with this blend. It has a very stereotypical Nicaraguan binder and filler/Ecuadorian wrapper flavor profile. In other words, no surprises.

The nice thing is that you are getting a cigar that has at least 4 years of aging, if not more. The blend tastes mature. It is very rich now. Very earthy.

I get some coffee essence. But the cigar is missing the most common flavor to Nicaraguan/Dominican cigars: Creaminess.
Then, of course, just like Murphy’s Law in action…here comes the creaminess in droves. I’m such a schmuck and I leave my stupid comments for you to read to prove it.

Floral notes appear. And a touch of pear. The sweetness becomes fruity. Like my good buddy, Joe.
As nice as the cigar is, so far, it is nothing special. With over 4 years of aging, it should really pop. But every Lost & Found cigar blend I’ve reviewed had the same issue. Technically, you can get the cigar ROTT and light up. I gave mine a couple weeks.

Any boutique cigar in “The Katman’s Best 177 Boutique Brands/Blends in the $6-$9.50+ Range” are every bit as good; if not better. Plus, I’ve reviewed some extraordinary cigars lately that were in the $7-$8 range that were spectacular.

The Alec Bradley Sanctum, Perdomo Small Batch 2005 Maduro, and the Rocky Patel Edge A-10 were better cigars and all in the $7.00 range.

I should be ooh-ing and ahh-ing by this point.

I’m listening to the cable TV 60’s music channel. One day they are spot on with the programming and the next day, way off base. Today they are on target. One think I like is that they play a lot of Beach Boys from the “Pet Sounds” album. Arguably, their best album. It was their “Sergeant Pepper” album. On top of that, they play a lot of Beatles. My all-time favorite band.

Back to the Lost & Found Racks on Racks.
It is a very nice cigar. Lots of subtle flavors, a touch of complexity, nice simple balance, and a medium finish. I’m guessing the halfway point or the last third will do its thing.
The roasted nuttiness, in conjunction with the creaminess, really soars now.
I’ve got a piece of wrapper that has come loose. Hopefully, it doesn’t get any bigger and I just blow through it.

SECOND THIRD:
The sun really shows off how beautiful the wrapper is. So oily and that pumpkin accent is gorgeous.
More wrapper issues begin to be a problem. Roughly in the same place. The Lost & Found Racks on Racks has been in the same humidor with the rest of my cigars and I’ve not had a single problem with the other cigars in terms of construction.

It’s pretty ugly now but fortunately only occurs on one side so I can flip the cigar for photos since there is no cigar band. 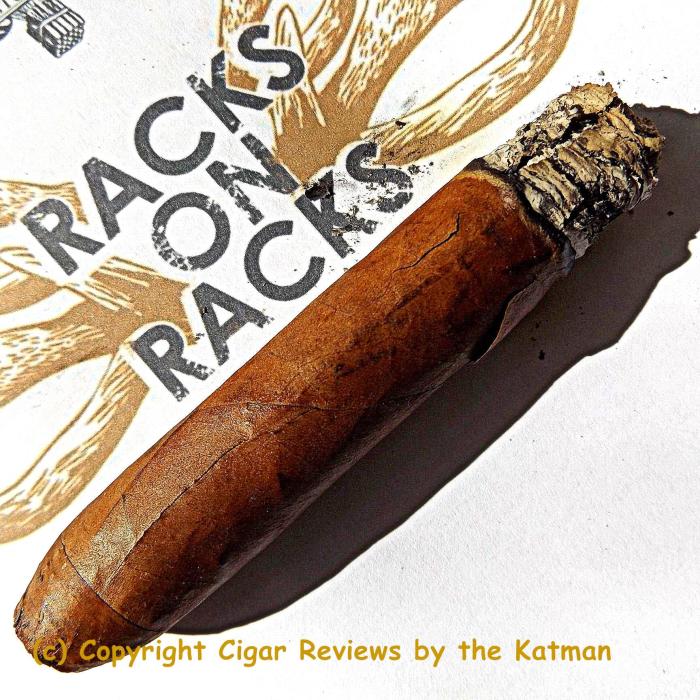 A $12.50 cigar shouldn’t be having these problems. I’m going to give the cigar the benefit of the doubt as I only had one stick. It’s not really fair to the cigar company to review when you have only one stick instead of several for comparison. So I won’t harp on this matter.

I probably screwed up by dry boxing the cigar for 24 hours. With all the rain, the humidity has been over 70% causing the cigar to bulge and swell. My bad.

The spice lingers at the midway point in the list of flavors. It toggles between black pepper and red pepper.
The cocoa is gone. But I taste caramel. Nice.
I thought I had some low key coffee notes but they are gone now too.
Here they are: Creaminess, sweetness, fruit, caramel, spice, earthiness, nuttiness, toasty, and herbal notes.

HALFWAY POINT:
Strength moves to a strong medium/full body. And some nicotine follows.
The ash is delicate and never makes it past half an inch before disembarking the cigar.
The Lost & Found Racks on Racks finds its complexity. The balance is right on.

I taste pepitas. Roasted and salted pumpkin seeds. I love those things but they tend to get stuck in your teeth.

The Lost & Found Racks on Racks is on cruise control now. Transitions that occurred in the first half have slowed down considerably.
The more I smoke; there is an increase of wrapper problems. For some reason, it mostly occurs on one side.

It is inevitable that at some point, I won’t be able to hide them in my photos.
Strength quickly moves to full body. And the nicotine is quite strong too. I’ve got a lot of cigar to go. It is a slow smoke. Smoke time has been 45 minutes.

LAST THIRD:
The char line has needed a couple of intense fixes. With the construction issues never letting up, I’m not sure I will be able to finish the cigar.

Yes, the Lost & Found Racks on Racks is very strong but it is also very smooth.
The complexity has forced the flavors into a subdued state of affairs. 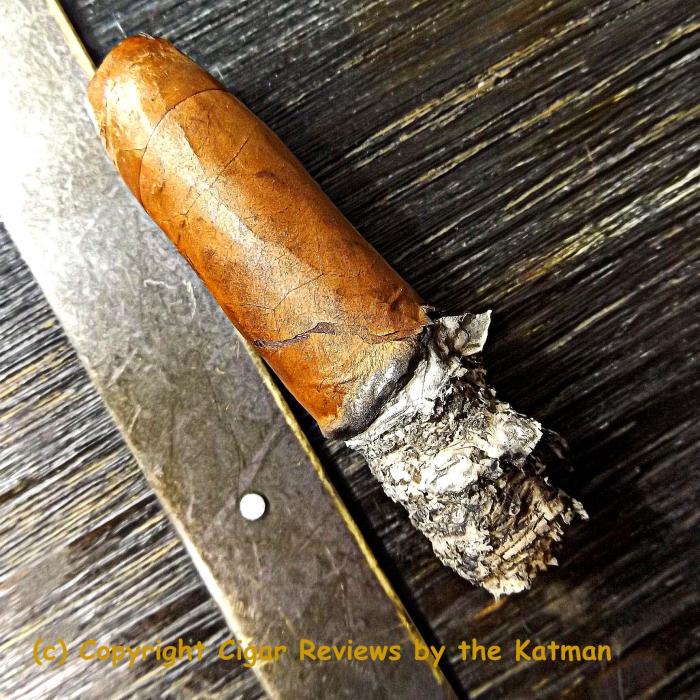 Glen Campbell is playing. Campbell made his bones as a studio guitar player. He was a good friend of Hal Blaine’s. I’ve never published the story where he shows up to one of Hal’s famous brunches on his yacht.
Campbell played guitar on most of the Monkees’ songs. He also played on quite a few Beach Boys’ songs.
He was a really big deal in the 60’s. I got to jam with him on Hals’ boat once. He was a monster on his axe.

The Lost & Found Racks on Racks is just cruising along. It’s tough with all that nicotine.
I read a couple of reviews and they didn’t have construction issues. So go figure. I get the one that does.

The well-aged cigars that Lost & Found puts on the market shouldn’t need extensive humidor time. They’ve already gotten it. I don’t think a couple months more aging will make any difference.
I have to say that I am disappointed. But then, the Lost & Found blends didn’t bowl me over.

SUMMATION:
The Lost & Found Racks on Racks was a pleasurable cigar but construction issues made an impact on my opinion.
I would like to get a fiver of these cigars but not at $12.50. Too expensive.

Based on only smoking one cigar, I cannot recommend it. If the price point was more reasonable, I could recommend it.
Flavors after the halfway point became static. This is not a kitchen sink flavor profile.

I have no idea where Lost & Found got this cigar. But the strength reminds me of a nicely aged Camacho.
I had some serious anticipation about smoking this cigar.

This is why I love the Cigar Federation COTM Club. You get a nice 5 pack of boutique blends. And you get the opportunity to smoke a few cigars that one has never tried.
I can highly recommend joining the club.

No story today as I’m a bit under the weather.

Don’t forget to check out the new Rolling Thunder Special. Dave Cribbin is now providing a 5 pack sampler for only $29.99. To get the savings, just enter the coupon code “Katman” during checkout.