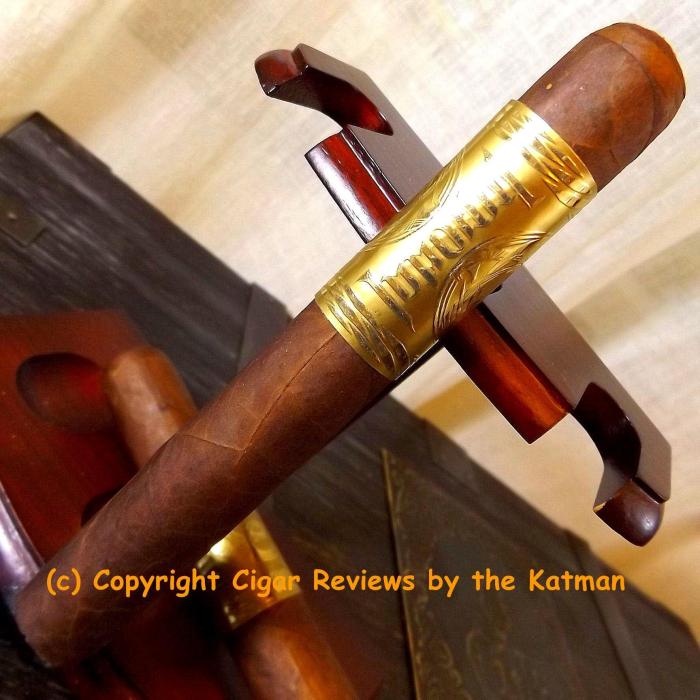 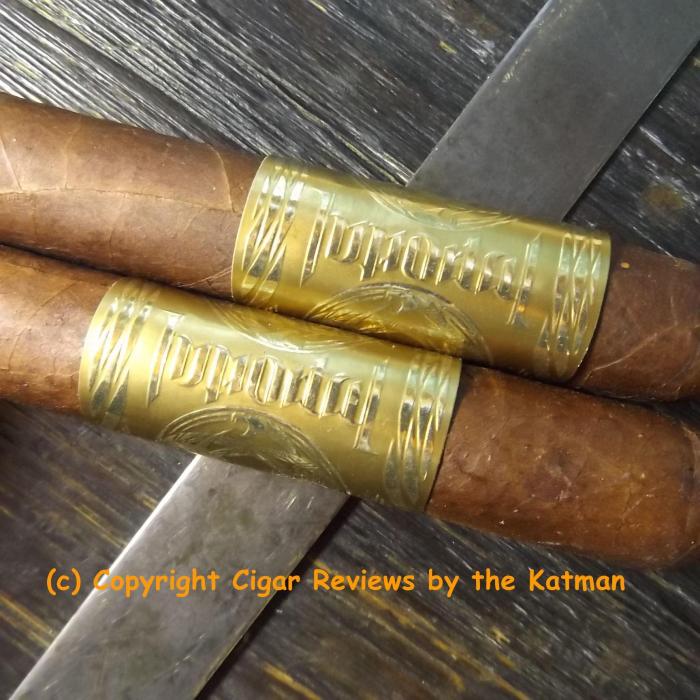 I shit canned yesterday’s review because I didn’t feel it met my own standards. My writing is becoming more and more difficult. Onward Christian Soldiers….

Today we take a look at the Immortal Cigar from Plasencia (Famous Smoke Exclusive).

I bought a 10 pack from Cigar Monster several months ago and paid $24.98. I haven’t smoked one yet as Plasencia cigars normally take a few months to age properly in one’s humidor.
I only found a single unbiased review. Not a good sign. And the reviewer didn’t think much of this blend. Sigh….
I’m out of new cigars so I’m going to review some older cigars. Plus, I’ve had messages that told me they can’t afford the newer, more expensive, cigars. So this stick should fit the bill nicely. Let’s hope my impressions are better than the other review.

BACKGROUND:
Released in the summer of 2015.
From the Famous Smoke web site:
“Immortal Cigars come courtesy of the esteemed Plasencia cigar company, and is making a huge splash in the cigar market. This puro is rolled using an extensive blend of Nicaraguan tobaccos all capped off by a slightly spicy yet sweet Habano wrapper to offer its beholder a smoke that burns long and straight, with a flavor that simply won’t relent. In other words, it’s an absolute flavor bomb, and is yet another testament to the already legendary lineup of Plasencia premium cigars.”

“The Immortal Cigar is the first release under the new brand’s umbrella, with a new blend designed to provide sophisticated and complex flavors to satisfy every cigar smoker’s taste buds. This blend will be made in small batches and production on the brand will be limited.”

DESCRIPTION:
Despite it being an inexpensive cigar, it is a nice looking stick.
Invisible seams. Lots of veins. A nicely applied double cap. The wrapper is an oily, dark chocolate color that is very smooth to the touch. The stick varies from one to the other as far as how solid it is. One might have the tensile strength of stainless steel cable while the next one has too many soft spots. Not consistent. But I must remember. It is a $3.00 cigar.
Interesting note…the couple cigars I chose for this morning’s review don’t measure up to 6”. One is 5-3/4” and the other is 5-5/8”. Naturally, I chose the latter.

I get a wet woody taste. Let me re-phrase that. I can taste wet wood. That ain’t right either. I can taste wood that is damp. Fuckingcuntpissratfuckwhoreshitheaddouchebag!!! OK. I will start again. There is a taste of lovely cedar. I can grok that.

Strength is medium body. Long ways to go before we hit full body.
Not a big Plasencia fan. I know he works side by side with a ton of manufacturers and blenders. But speaking of just his own blends, not a big hit with me. Nestor is sort of the man behind the man behind the man in terms of making cigars for other companies.

Slow smoking cigar. I picked one of the more packed sticks.
The Immortal Cigar has a nice easy going flavor profile. I doubt, even with over two months humidor time, that it will sock it to me. One thing I like is the consistency of the red pepper. If there is a medium level of spice throughout an inexpensive cigar, it really helps to illuminate the other less spectacular flavors.

Oh wait…there is some malt..not much, but a little goes a long way: Cara Munich Malt and Chocolate Malt.

The large cigar band is a major pain to photograph. There is no writing on the band. It is merely stamped in place. So we have gold on gold relief. I ain’t such a hot photographer to begin with so good luck to us all. And the way it is written reminds of the Illuminati way of spelling it.

Some creaminess begins to overtake the rest of the very few flavors and move its way to the top of the list right behind spiciness and malts.

SECOND THIRD:
Smoke time is 20 minutes.
While not a complex cigar, it is certainly a pleasant one. I tried a couple over the last couple months and neither delivered what I taste now so give them some time like I did.

Flavors begin to ratchet up now. The creaminess and chocolate and malts are driving the bus. The spiciness is still with me. There are bits of dried fruit, cinnamon, that white vanilla frosting you dribble on your Pop Tarts (Man, I could dig one of those now but no such thing as sugar free Pop Tarts), some Asian spice, and a lot of leather and wood.

The flavor profile is, how should I say this? It’s at that stage that if this was an expensive boutique blend, it would be ready to explode with flavor goodness. But the Immortal Cigar is not going to do that. It is pretty much a one trick pony of pleasant flavors and simple pleasures.

I have to admit…I’m enjoying the Immortal Cigar. It isn’t bowling me over but it is a solid blend. Some complexity would really make it a hit. But I doubt this will happen.

The char line is surprisingly on point..for the most part. A little wavy but no runs.
Strength hits medium/full.

HALFWAY POINT:
Smoke time is 45 minutes.
Only 26 people got to read my review yesterday before I yanked it for terrible content.

I had told y’all that I was going to a tux fitting, that night, for my daughter’s wedding in May. I went with the groom to be, his daddy, and a couple ushers. Katie went along too.

I said, in the review, that I would switch shoes out at the wedding. Instead of wearing those stupid looking patent leather shiny rental shoes, I’d wear my vintage Stacy Adams rock n roll snake skin shoes. Got them in the mid-90’s to wear on stage. As they are 20 years old, they have seen some wear but with the monkey suit on, no one will notice. I may take them to a shoe guy to spruce them up. 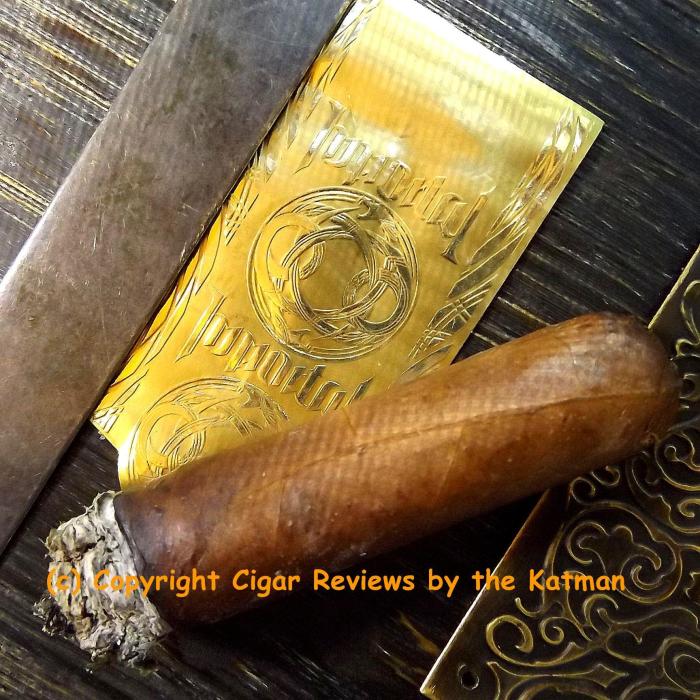 I got a letter from a reader telling me that I should shit can my idea as I would pay for this misdeed the rest of my life with my daughter’s disapproval.
Well, I took the shoes with me last night and everyone thought they were very cool and both the groom and my daughter approved my choice.
Rented a tux lately? $200.00!!

OK. Back to the Immortal Cigar.
No real transitions. No changes to the flavor profile. But even the spiciness is still with us.
The Immortal Cigar is much better than I had anticipated.

Of course, I was lured into this non-deal because Famous had not yet begun to carry it yet. They were trying it out on Cigar Monster first. Not much info on the cigar so it seemed like a good deal. Bait and switch as you can buy the same 10 count bundle of Toros on the web site for $30.00. So I saved $5.

Strength hits full body.
Nicotine begins its journey to my puny brain.
There is a small plug near the cap so out comes the cigar awl.
Much better.

What? Can this really be happening? Some complexity? Alert the media!
Yes lovely readers, the Immortal Cigar is providing a bit of sophistication. Hot damn!

BTW- Go Packers!! And they are playing one of Charlotte’s favorite teams: San Diego Chargers. She is a diehard California sports team fan. She still loves the Raiders.
We read a rumor that L.A. may be in negotiations with the Rams to get them back. Doing so includes a guarantee of building a brand new stadium.
They used to play at the L.A. Coliseum. Going to a Raiders game or a Rams game back in the day…well..you took your life in your hands. No parking. So one would park on the street and pay a local $30 to “watch” your car. And if you made the mistake of parking in one of the few parking lots, they jammed you in and you couldn’t get out til the other cars blocking you left first. What a nightmare.
But the 1923 coliseum held over 100,000 people. And hosted two Olympics.

The Immortal Cigar is proving to be a very nice blend. Again, proving that you don’t need to spend $10 on something new and flashy with some ridiculous name with a back story a mile long.

LAST THIRD:
Smoke time is one hour 10 minutes.
Construction has been solid. Char line is spot on.

Flavors explode. Something I never would have thought could happen. I’m laughing because this is a $3 stick. I can’t think of another blend in this price range with the quality that the Immortal Cigar shows. One doesn’t have to be ashamed to smoke this in public or in your local herf.

I still have 7 left. That’s a good thing. I was smart in allowing them to rest for over 2 months. But then I haven’t smoked a Plasencia cigar that didn’t need extensive humidor training.

Wow. It is super full bodied now. My vision is blurred. Absolutely not for newbies. Even the experienced smoker will be taken aback.

If I had blind taste tested the Immortal Cigar, I would have easily thought of this as a $7-$8 boutique blend.
So, dear readers, I am sated.

Good cigar for a fraction of what it may have cost under different circumstances. I applaud Famous Smoke. They did a fine job working with Nestor Plasencia.

These cigars show up on Cigar Monster every day. So you may only save $5 but it’s $5 in your pocket, not theirs.
I highly recommend you have something in your stomach before lighting one of these sticks. I’m doing it on an empty stomach and it’s overwhelming.

PRICE POINT:
The Immortal Cigar was quite the surprise. I paid $2.50 a stick for the Toro.
You can buy singles, 5 packs or the 10 count bundle on the Famous Smoke web site. Try a 5 pack and then bow to your great Uncle Katman.