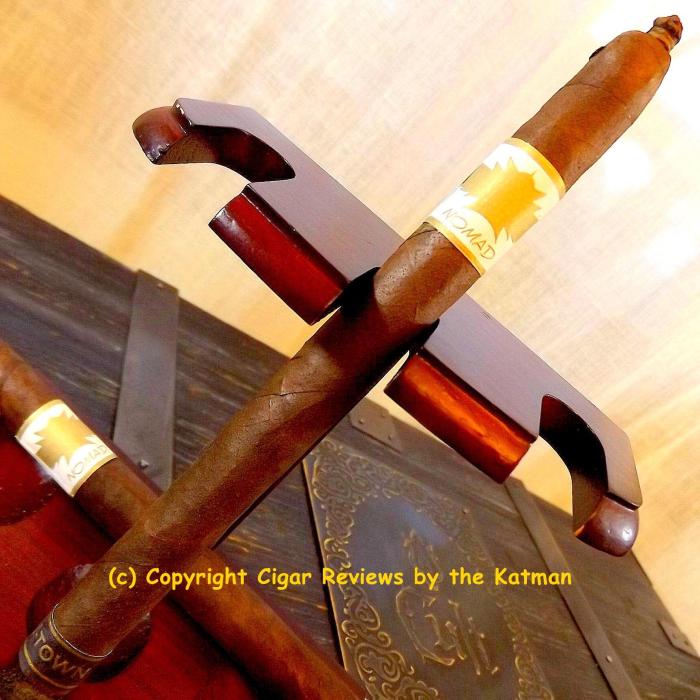 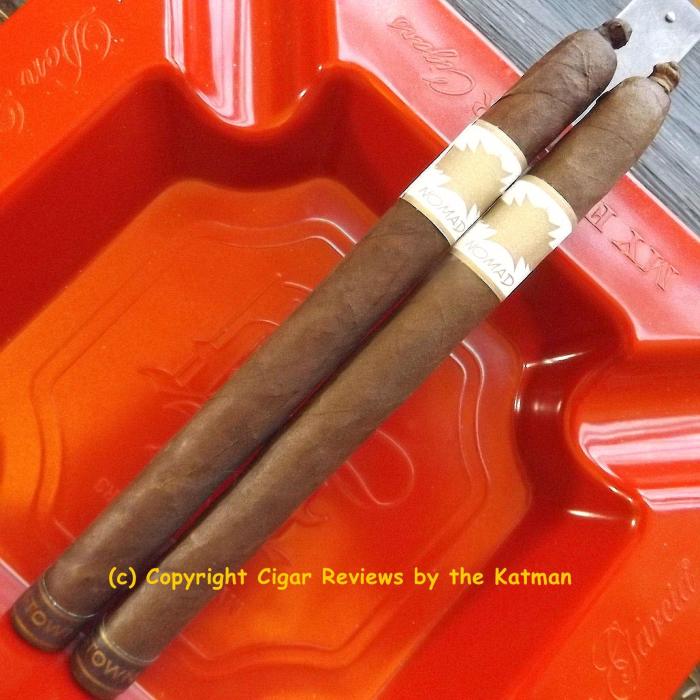 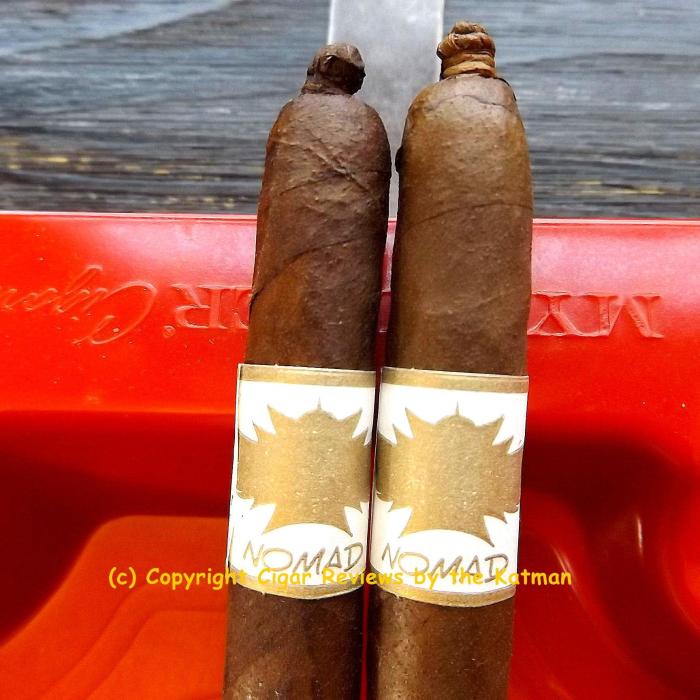 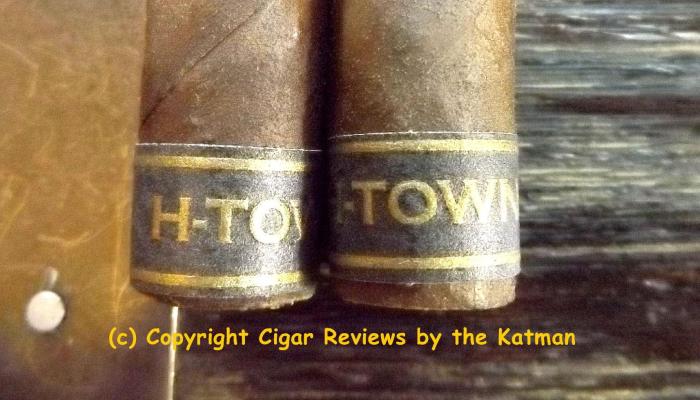 Today we take a look at the Nomad H-Town San Andrés Lancero.
Thanks to Miguel Castro for the cigars.

DESCRIPTION:
This is a very oily stick. It is a dark chocolate brown in color. If I were better at photography, or the sun came out, you would see this. Very visible seams. Lots of spider veins. But this is a solid cigar. No soft spots.
What is with every one and his brother using a white background with gold lettering on their cigar bands? Don’t the manufacturers know that this gimpy geek can’t get a good pic with that duo of colors?
And there is a nice footer band that comes across easily for my geriatric photographic skills. Merely says: “H-TOWN” And “STOGIES.”
And finally, the part to be circumcised: The nicely rolled pig tail. It sits atop a triple cap that is nearly invisible.

I normally stay away from lanceros or lonsdales. Mostly due to a pain in the ass caused by burn issues that can sneak up on you quickly if you don’t pay attention. Plus they burn too quickly for my tastes. I’ve yet to have a lancero go longer than 40-45 minutes. And for some reason, manufacturers charge just as much, if not more, for this size.
So far, the char line is doing OK. But I’m keeping an eye on it. No runaways allowed unless you’re Joan Jett. 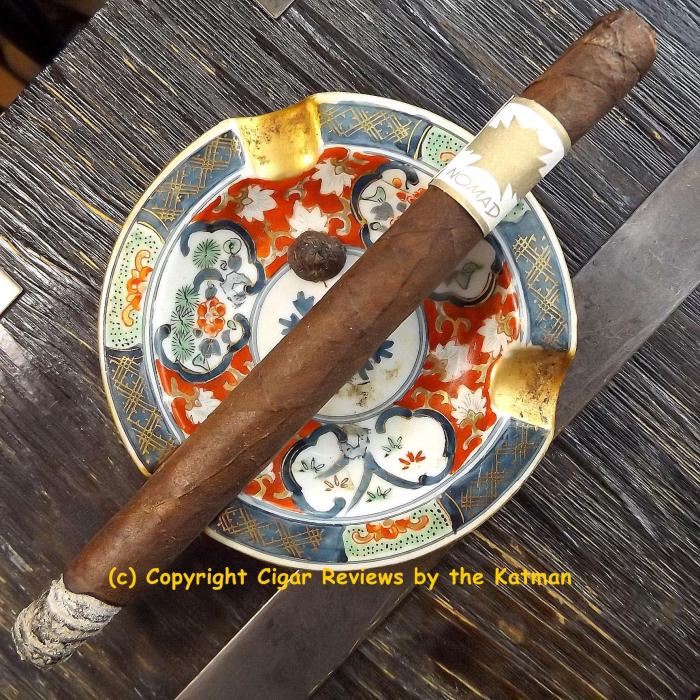 I’ve only had these cigars 2-3 weeks. Apparently, timing is good for lighting one up.
There is a nicely aged tobacco element.

And we have some nice transitions. This began from the start of the cigar.
I’m impressed with the char line. It was wavy at first but now is razor sharp.

The Nomad H-Town San Andrés Lancero is a very pleasant cigar experience but I’ve yet to be wowed by it. Flavors are a bit too subtle for my tastes.
I predict the second half will be more of what I like.

I’m listening to “Rubber Soul” on Spotify. The song playing now is “Think for Yourself.” And I just remembered this was the first time a fuzz tone was used on a bass in a recording. So I had to get one. Back then, there was only one on the market. Cost $100 back in 1966. It looked like a chrome rectangular box about 6” x 2” x 2”. And you plugged it in directly to your amp head. It had an on/off switch. No controls. It was run by a single 9 Volt battery.

We used it when we played “Love In’s.” We did a “freak-out” version of Van Morrison’s “Gloria.” I know that sounds nuts. But in the middle of the tune, I played a solo and then used the feedback from this ridiculous thing to get amazing sounds. I was playing my hollow body Hofner bass so it really worked well. All the stoned Hippies loved it. Man, I haven’t thought of that in decades.

SECOND THIRD:
Smoke time is 15 minutes.
Still waiting for the Wow factor. The flavors can best be described as sublime. Easy going. I think this concoction would be best served by more strength. I would love to see it full bodied.

So that’s what it is missing…the Oomph Factor. The black pepper is nearly gone so there is no big zestiness to this blend. 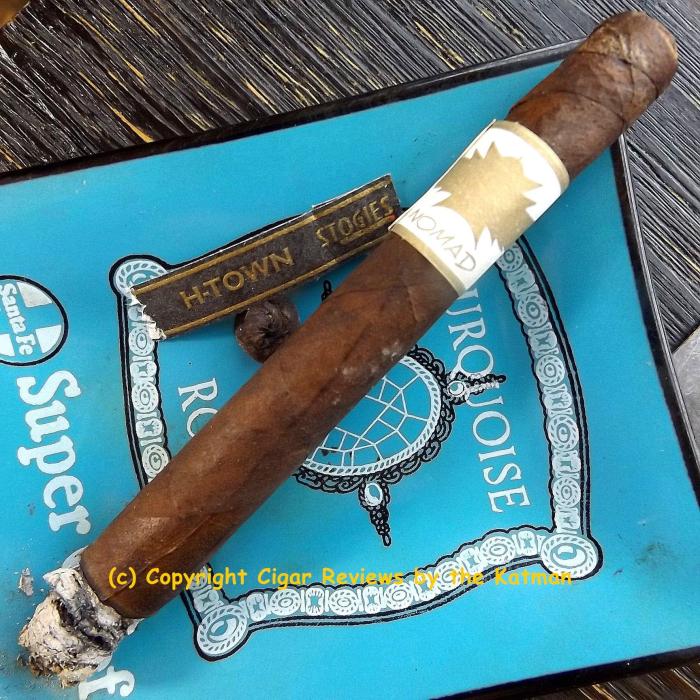 The Nomad H-Town San Andrés Lancero is a good cigar but knowing what Fred Rewey can produce, I think he could have done better. Of course, I have no idea how much input Stogies World Class Cigars had on the blend.

“Rubber Soul” is over and now it’s Lennon’s last album: “Double Fantasy.” Do you remember where you were on December 8, 1980 when Lennon was murdered?
I do.

And now we slip into big time flavors. The light switch has been flipped on.
Everything changes. The black pepper soars like a flying pig.

Oh Lord. I forgot that Lennon allowed Yoko a song on “Double Fantasy.” This may be the right time to blow my brains out. So I quickly move on to another song. All I can say is that she must have been some sort of sex goddess to capture Lennon’s heart and naughty bits. 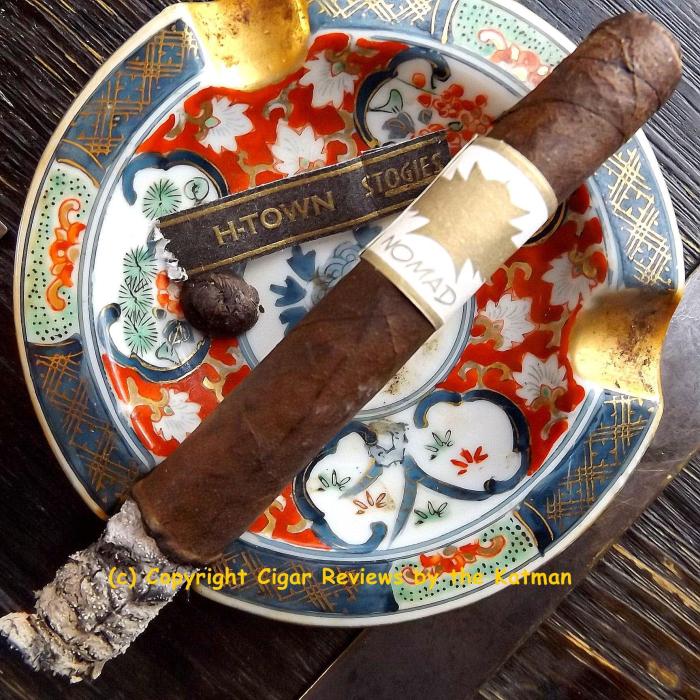 I’m impressed. With more humidor time, this beam of light will occur much earlier.
The Nomad H-Town San Andrés Lancero needs its first touch up at the char line.

I shifted to “Sgt. Pepper’s Lonely Hearts Club Band.” Re-mastered. And I have it so loud, I can’t think.

LAST THIRD:
Smoke time is 35 minutes.
The price. Considering how many manufacturers release this size as a fanfare to any of their existing blends, $8.50 is a deal. I’ve never understood the big deal made by the manufacturers when they release a lancero. Like it is some sort of earth shattering news.

Only certain smokers are lancero enthusiasts.

The Nomad H-Town San Andrés Lancero is absolutely exquisite now. When a cigar tastes as good as the Nomad H-Town Lancero, I want it to last longer than 45 minutes. I want 90 minutes of it. 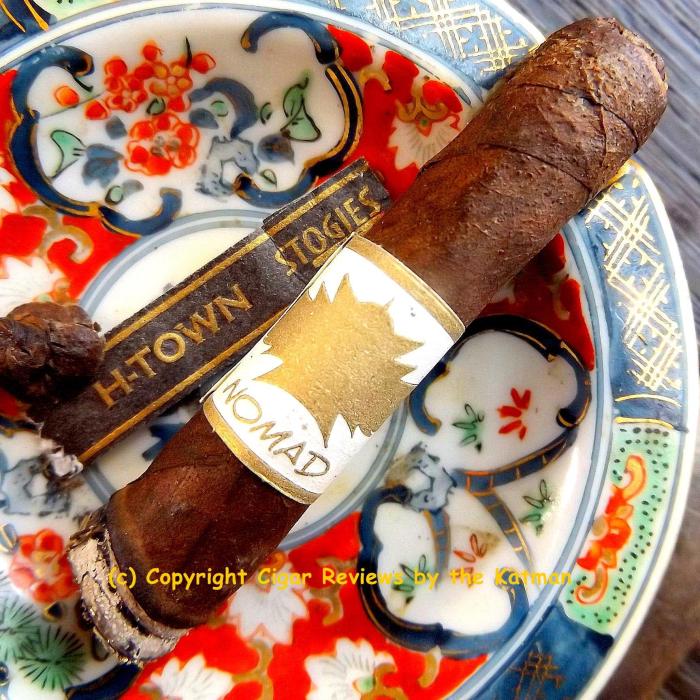 I want to take this moment to thank Kyle Hoover and Chris Kelly of Ezra Zion Cigar Co. Apparently, according to Kyle; they had planned to also sell “Ugly Hanukkah Sweater” to be a companion to their “Ugly Christmas Sweater.” Only 700 cigars were sold so they disappeared in 48 hours.

Kyle sent me the only Ugly Hanukkah Sweater pack. Four cigars again like the Christmas Sweater. Two blends. One blend is a 6 x 52 or 54 Toro and the other is a 4 x 42 or 44 petit corona. I don’t know the leaf stats yet. And I haven’t gotten approval from Kyle to review it yet. But it gave me shivers when he said: “It’s truly limited edition because you have the only one on Earth!!”
WOW. 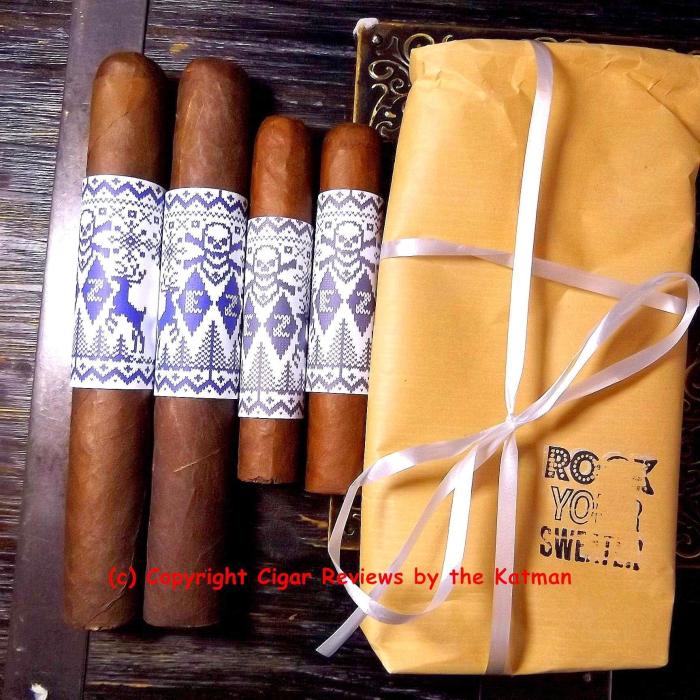 And for something completely different:
My older second cousin, Fred Selden, is an award winning reed player. I believe he is 4 years older than me.
Fred is a brilliant player. So much so, that at the age of 13, he took his own jazz band to Europe to tour. He has played with just about everyone. And in the last couple of decades, he has been heavily involved in the movie industry. Either as a player or composer.

Fred a few years back: 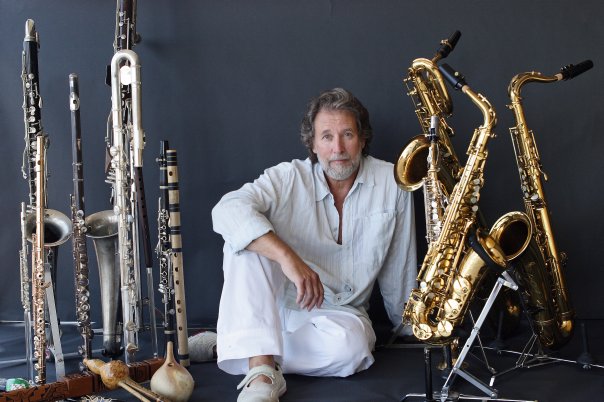 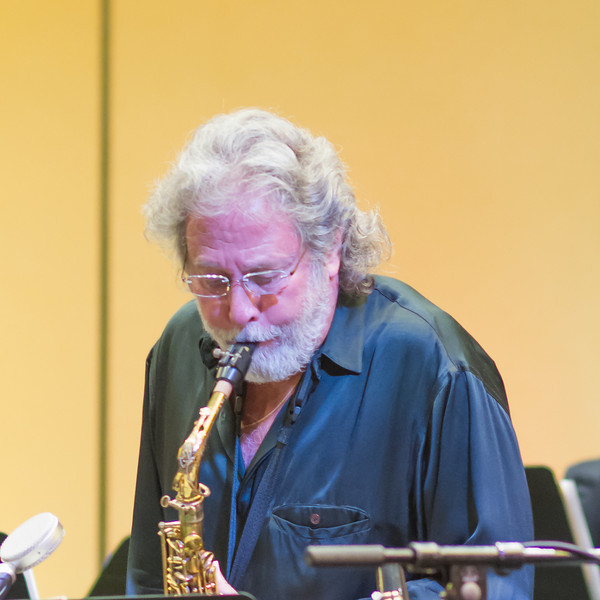 From the Fred Selden web site:
“Dr. Fred Selden is a Grammy nominated conductor, arranger and composer, and one of LA’s top session players. His musical talents have been featured in countless television and film projects, and he has a long history in the music business. He has recorded with such illustrious names as Don Ellis, Ringo Star, Elvis Presley, Michael Jackson, Natalie Cole, Bill Holman and Lionel Hampton to name a few. Fred is also one of the pioneers in the use of the “Electronic Wind Instrument” (E.W.I.). He has received a Grammy Nomination, a Gold Record and the National Academy of Recording Arts and Sciences “Most Valuable Player Award” for three years running. He has also written numerous music education books and composed, arranged and performed on many albums.”

Back in the mid/late 1960’s I would visit him and his family in Studio City, CA. I was related to him from my mother’s side. His dad was one of the biggest entertainment lawyers in Hollywood.
I had very little family. And my Aunt Gussie and Uncle Frank were terrific people. I really loved them.
So I used to take a drive and visit my cousin. I loved hearing his music stories.

Fred had an older brother, Bobby. Bobby had a serious drinking problem.
Sometimes, I’d get there and Fred was doing a last minute session.

So I sat with Bobby and his neighbor, William Holden. Yeah, my family was that upscale.
Holden was a major movie star from the 1950’s-1980’s.
I remember him in Sam Peckinpah’s “The Wild Bunch.” Man, he looked old. 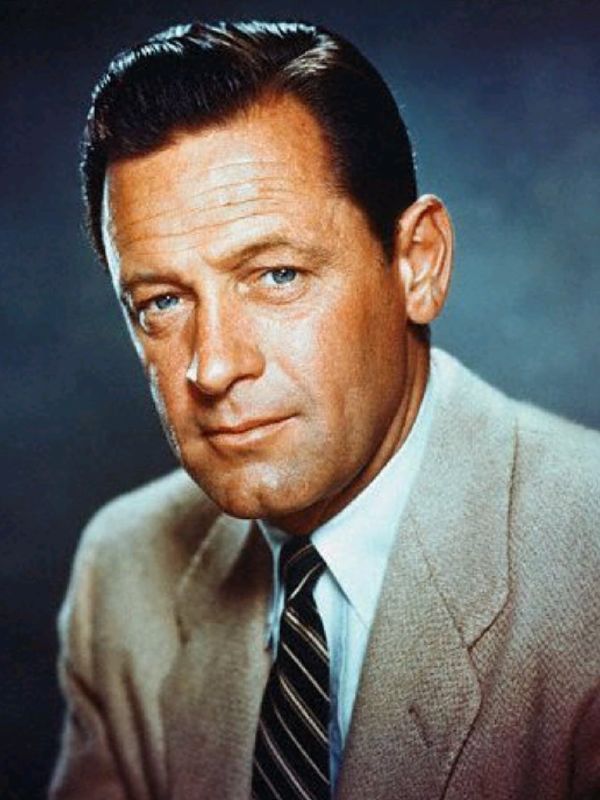 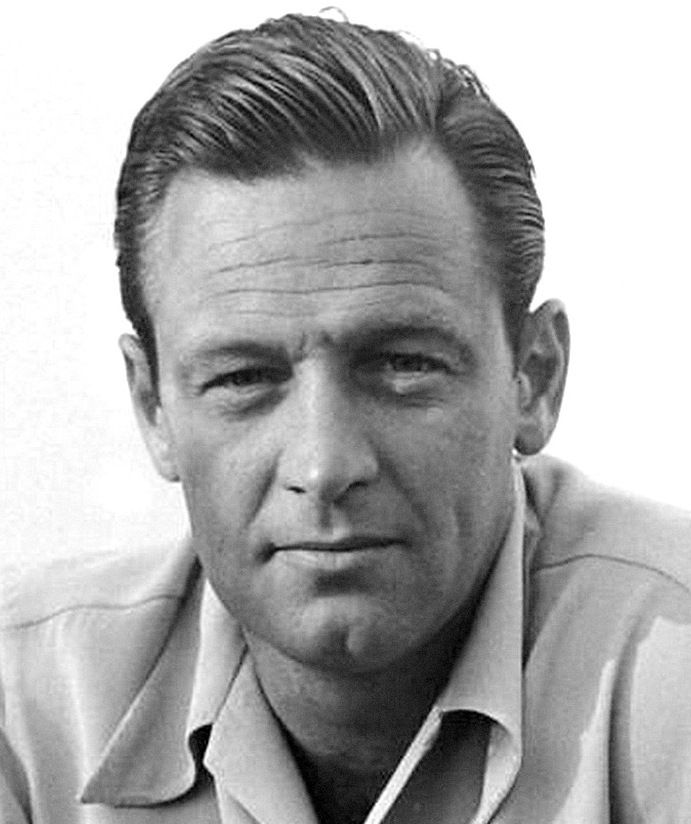 We would sit on the back porch and Bobby had a liquor cart on wheels. He sat it next to the round glass table and I basically listened.

Holden would get shit faced and start dishing dirt on Hollywood. I was entranced.

But you could see in Holden’s face that the mass consumption of alcohol was taking its toll.
I must have visited a dozen times when Holden was there. Bobby and Holden must have had this drinking buddy thing going. I was only in my teens and had nothing to offer to the conversation. Although, I was a big movie buff and I had lots of questions that Holden was glad to answer. I was especially interested in “Bridge on the River Kwai.”

Well, as all things do, things change. My life was moving forward and I just didn’t have the time to visit much.
I do remember, several years later, hearing that Holden died a miserable lonely death. All because he was a lush.

This is from Wikipedia:
“According to the Los Angeles County Coroner’s autopsy report, Holden was alone and intoxicated in his apartment in Santa Monica, California, on November 12, 1981, when he slipped on a rug, severely lacerated his forehead on a teak bedside table, and bled to death. Evidence suggests he was conscious for at least half an hour after the fall. It is probable that he may not have realized the severity of the injury and did not summon aid, or was unable to call for help. His body was found four days later.”