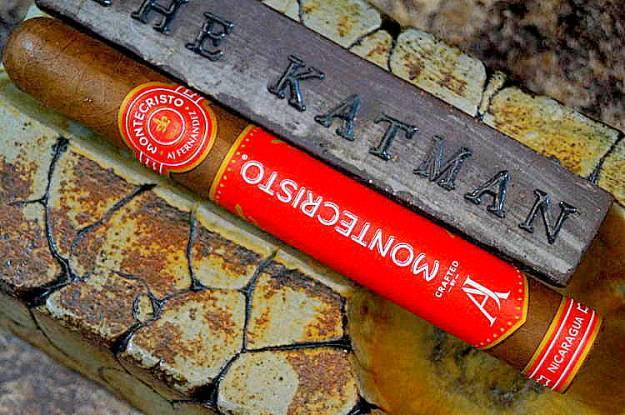 Today we take a look at the Montecristo Crafted by AJ Fernandez Limited Edition Toro.
I bought a 10-count box around two months ago.

BACKGROUND:
From JR Cigars:
“Made exclusively for JR, the Montecristo Crafted by AJ Fernandez Limited Edition cigar is an ultra-premium gem that puts AJ’s modern spin on this classic Cuban heritage brand. This full-bodied blend features aged Nicaraguan fillers complimented by a San Andres Mexican binder, all encases in a shiny medium brown Ecuador Sumatra wrapper. After experiencing the cigars bold flavors of sweet cocoa, espresso, leather, and a crisp spicy edge, you’ll want to make plenty of room in your favorite cigar humidor so that you can order some more!”

APPEARANCE:
A toothy, oily stick with little resistance when squeezed. The wrapper has a slightly orange-ish copper penny look. Seams are tight. Plenty of veins but they don’t interrupt the flow of the stick. The triple cap on all I have smoked are in sync…nicely applied and well rounded.

FIRST THIRD:
First tune to pop up is “Whiter Shade of Pale”…which pretty much describes my appearance for the last few weeks. I began to look like an apparition. Good to be 100% well at last.
While the cigar offers no resistance to the touch, it surprises me by having a perfect flow of air once the cap is removed. I put away my PerfecDraw draw adjustment tool for another time.

I’ve tried to smoke a few cigars along my flu journey, but they made me feel ill and that was that…but yesterday…I smoked a bunch and it, once again, proves to be my barometer that I am well when I can taste and enjoy a cigar.

Today’s review will be considered a warmup period in getting my feet wet again…so here goes…be gentle with me.
The draw is spot on…a smoke bomb.

First up is a blast of black pepper. Followed by creaminess, chocolate, espresso, malt, some caramel, and cedar. Good start.

A hint of complexity kicks right in wasting no time. A nice finish coats my teeth and lips. No transitions yet…too early.

I was just wondering…is there anything that AJ won’t adhere his name to in helping other cigar companies out? Even better…Marlboros by AJ, Honda Civics by AJ, or Fleet Enemas by AJ? Don’t take it personally, AJ. You have more money than God so you can take it.

I checked and did not find a single review of this stick. This usually means put my head between the legs and pray the nuclear explosion misses me.

Nice flavors. Subtle but rich. Has some snazzy character going on here.

It is not a typical AJ heavy handed catalog blend. Though, lots of spiciness and intensity. This is a lighter version of his other blends in that the spiciness is backing off allowing other nuanced flavors to take a breath.

Construction is good. The ash has a nice clean burn line. And it’s a slow smoker; like when you are sunbathing naked in a chaise lounge and you smell something foul; only to find out your wife has been tossing lit matches on to your pubes. Takes a while, but they will blaze.

I’m guessing the full tilt strength doesn’t kick in til the second half.

I’m having some wrapper issues now…near the char line. The move was rough on my humidors. I’ve smoked a couple of these sticks before the move and had no issues.

With just a scoche before I hit the second third, the flavor profile opens up. Nothing new from the aforementioned aromas and cold draw; but better balanced and more complex.
Transitions begin. Good sign.

The creaminess soars. As does the malt and earthy tobacco elements. Espresso mind melds with the black pepper in a good way. The first sign of the upcoming strength overhaul.

I doubt there will be the usual smart-ass comments by me in this review. Didn’t sleep last night. Finishing up unpacking yesterday and I tripped on something in the apartment and went flying. You know those 3-4 seconds where you’re airborne and you know everything is beyond your control? And all you hope for is not to crack your head on something that allows tiny bits of brains to spill on the new carpet…I landed on my chest hard and rattled my cage. Broke the three middle toes of my right foot. Wrenched my back and neck. Must have tried to use my right arm to break the fall as my right shoulder is sore as hell this morning. I am one giant Popsicle stick.

I promise to be clever tomorrow. I plan on using heavy drugs to get me to sleep all night tonight.

SECOND THIRD:
I used my PerfecRepair glue for the wrapper discombobulation and everything is fine.
This is quickly becoming an exceptional blend. Flavors enlarging and throbbing and the stick is producing huge purple veins. Odd.

I thought, by now, the blend would be pumping mind bending strength to my brain but it seems to have leveled out and not such a bad morning cigar.

Mind you, I really haven’t smoked a cigar in nearly two months. This is a good sign I did not get wimpified.

I just initiated the new place…I dropped a big hunk of ash on the new carpet. Missed my testicles completely as they are tucked into my socks.

I’m always very leery about blends made especially for just one online cigar store. But this AJ/Monte stick ain’t bad. Changes are in constant motion keeping me interested. Nothing linear going on here.

Bam. Like a light switch…we have a flavor bomb. Huge notes of already described flavors go bat shit crazy on my palate. Intensity is ingratiating.

I imagine with a few more months of humi time, the complexity will begin sooner.
A very decent $8.50 blend. Although, I did find a special on these when I bought them, thanks to Josh Paraise, and only paid $7 per stick.

I’m going to stick my neck out and say that this blend is as good as the other Montes by AJ…if not better.

It’s good to take a break and allow one’s palate to reboot…even if you hate the reason for it.

The burn is maintaining an even keel. The ash is getting longer so I tie bungie cords to my nuts so I can jerk the cord should the ash let gravity do its thing. Sometimes, it is difficult to pull this off as Sammy the cat usually likes to lick my balls while I review. I shoo him away after 5-7 minutes…that’s all I need…we’re both happy.

The nicely done construction makes this a leisurely smoke. That’s good for me as Charlotte is waiting for me to finish this tome so I can start taking flattened boxes out to the dumpsters and my nearly broken body needs all the time it can muster. I have no idea how I’m going to get my kicks on with three broken toes.

I’m only halfway through the Montecristo Crafted by AJ Fernandez Limited Edition Toro and I’ve been working on it for an hour. 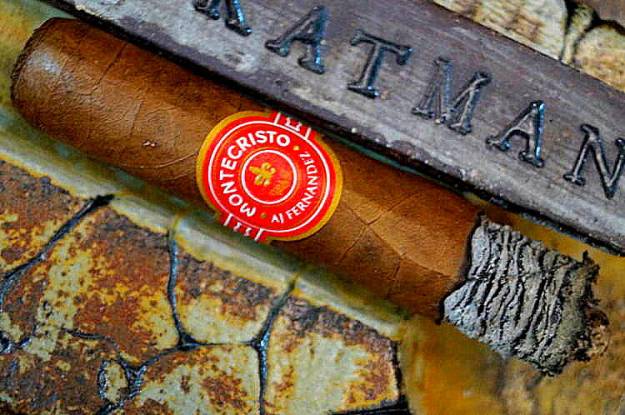 Time to discuss flavors: A mild spiciness just the way a morning cigar should taste; not overwhelming but a constant that gives the blend some pizazz…Chocolate candy bar, caramel, lots of malt, cedar, very creamy, easy going black coffee, cinnamon, and nuances of indescribable flavors that move in and out of the moment. The complexity continues to improve.

Time for a sip of water…things smooth out beautifully. Well done, AJ.

The ash falls…I pull the bungie cord…my nuts fly into the air…and the cat jumps with them as one of my coconuts was still in his mouth. He gives me the stink eye but at least I’ve not singed my walnuts.

This is a medium/full strength cigar. Not the full tilt I was expecting. I prefer this for my first cigar of the day. Not that nicotine hallucinations aren’t welcome while your head is buried in the toilet.

I really like this cigar. It is a bit out of character for what I expect from an AJ blend; but that’s not a bad thing…mixing it up is always good. I also have the Montecristo Crafted by AJ Fernandez sticks. They are a bit more expensive at nearly $12 per stick. I may review those this week for comparison. (I realized a few hours after I published this review that I did review the original Montecristo Crafted by AJ almost 3 years ago to the day.)

LAST THIRD:
At this point, the cigar really jumps the shark and shows the blender’s intent.
Flavors are simply perfect. The balance is the most impressive factor of this blend.
And then it hits full tilt as my vision dissipates.

It is here that the blend really blossoms. It grabs my attention with the same gusto as a hangman doing three at once.

I have approximately a half hour to go before I publish this and that means I am expected to do hard labor in the final clean up phase of making this apartment presentable. I look up on YouTube how to whine with the right affectations so that my wife feels sorry for me and leaves me alone. I find the guttural whimper along with the appropriate grimace seems to work best. We shall see. 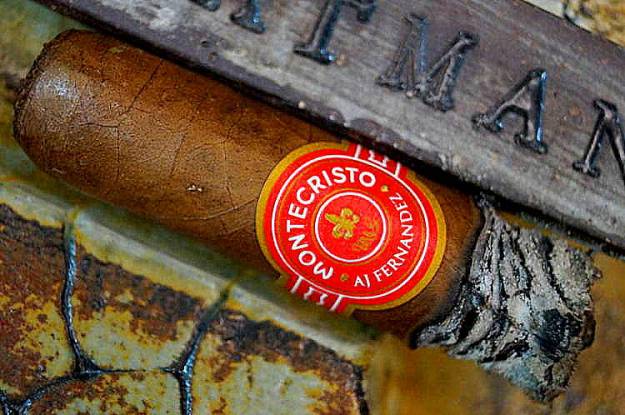 If you enjoy AJ blends…if you enjoy a complex stick…one that does not tax your brain…and one that increases in enjoyment with each puff, this baby is for you. It is not an incredible or show off impressive…but it is a solid smoke that is enjoyable from stem to stern…you will dig this baby.

The price is right. You can do a whole lot worse at this price point.
This is a good stick for newbies to try. While strong, it never overwhelms. It’s a good teaching cigar.

I’ve taught Sammy how to take a mouthful and then when I get up, he hangs on. I will use the YouTube whine while pointing to the cat and ask Charlotte if I can be excused from today’s efforts.

Definitely try a fiver.
By the next review, I should have some sleep under my belt and will find my Katmanocity.

‹ Happy Sequestered Easter and Passover to Everyone!
Gotham House Blend Connecticut | Cigar Reviews by the Katman ›