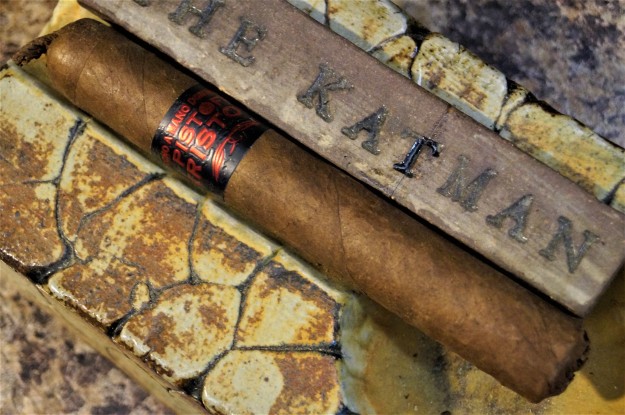 Yes, I know I am the last guy in North America that has either smoked one or reviewed this cigar. I bought it from Atlantic 4-1/2 months ago.
Since it is a regular production stick, gotta add it to my catalog. Why? How would I know? I have a bunch of new cigars that you’d rather see reviewed but they just aren’t ready yet.

BACKGROUND:
Released March 2019
Regular Production
From Halfwheel.com (6-1-2019):
“Originally launched in the summer of 2016, the Pistoff Kristoff line was said to be the fullest in the company’s portfolio, yet owner Glen Case repeated several times that it also packed a good amount of flavor and smoothness. As for the name, that came from a customer who pitched the idea of the Pissed Off Kristoff. Case liked the sound but not the spelling, simply adjusted it and the cigar was born.

“It uses a natural Mexican San Andrés wrapper, Indonesian binder and Nicaraguan fillers. It was originally released in four fairly traditional sizes before the company went big in January 2019 with the Extremely Pistoff Kristoff, an 8 1/22 x 60 gordo extra. In the spring of 2019, the company went the other direction, releasing the 5 x 44 Lil Pistoff Kristoff and bringing the line to six sizes, all of which come from the Charles Fairmorn Factory in the Dominican Republic.”

APPEARANCE:
A medium weight stick. Not much resistance when I squeeze. A pigtail above and a closed foot below. A medium brown wrapper full of veins. Seams are visible and not all that tight. A very lumpy and bumpy stick. Very toothy. A cigar band that is designed for the young ones. I can barely read what it says as the background is dark, and the writing is candy apple red.

SMELL THE GLOVE:
Aroma notes are faint. What is available to my proboscis is dark chocolate, creaminess, black pepper, black licorice, cedar, barnyard, hints of malt, peppermint, and a touch of espresso.
The cold draw presents flavors of red pepper, maraschino cherries, chocolate, creaminess, cinnamon, cedar, corn flakes, cedar, and malt.
The draw is fine. My PerfecDraw draw adjustment tool sulks; runs away and hides in my box of ED products.

FIRST THIRD:
First up is dirty mop influence. Not a good start for impressing me.
And then it calms the fuck down.

A big wallop of cinnamon and creaminess attach their tentacles to my palate. Good have been worse…two letters change, and it could have been testicles. I don’t love the smell of testicles in the morning.
No idea why this little piggie started like a bundle cigar but it quickly self-corrected.

The char line is a 1968 Chevy Camaro SS.
One of my best friends had a father who was a car salesman and did very well. Dad bought my friend, Bob, the car. And it was racing green with two wide racing stripes front to back. Plus, he tricked it out with fancy wheels, pin striping, new grill.

I bought a new 1969 Chevy Impala because I was a bass player. Every friggin car decision I’ve made my entire life is based upon how big a trunk or the size of the storage area so my bass rig would fit inside. My car was tricked out for the time era and cost me $2100. New.

OK. The cigar. Flavors are a mish mosh of nothing impressive. No distinction between any of them. A big lump of coal.
Yes, I know this is a popular cigar. (I got that out of the way).
Strength is a solid medium.

But I taste zero complexity. No transitions. And the finish is catfish…or a girl’s locker room; you choose.

It is burning quickly. I therefore rescind my assessment that this is a medium filled stick.

The Pistoff is nothing special. With as much humi time as it got, I should be tasting the world laid out in front of me. Like a deli spread.

Most reviewers gave this stick a 90. At the moment, I don’t see it.
But then, I am not a fan of Kristoff cigars. They just don’t push my button. But as they are a highly successful company, a lot of smokers disagree with me.

Sometimes your palate is receptive to a certain type of blend and other times it is a fish wrapped in newspaper.

A mustiness consumes the flavor profile.

Maybe something happened during humidor time. I may have stuck it next to a 5 Vegas and the Fiver stole all the good stuff from the Pistoff.
Unless a miracle occurs, this cigar is going to be a dud.

I should have tasted immediate complexity and some real character from the first puffs. It got plenty of humi time. So, no excuses.

SECOND THIRD:
Took 13 minutes to get here. It’s under filled.

I met Glen Case once here in Milwaukee. We talked for a bit. I did not bring up that I was a katman. I do not believe I’ve ever given his brand a stunning review…nor had I reviewed any of his blends in quite a while. Forgive me, but his blends seem to be aimed at the unsophisticated palate. In other words, guys that hang at B&M’s.

I never understood going into a cigar shop, wandering the humidor, brings out a cigar for purchase, and then sits down and smokes a cigar with virtually no humidor aging. And then they keep saying, “Boy. This is a great cigar!” Unless the cigar has serious aging, no cigar tastes good from the cello.

The blend begins to improve. Halle-fucking-lujah.
Flavors are non-descript, but the complexity is showing me some character. Character is good. Unless you’ve always wanted to be a professional clown.

The char line is fucking fantastic.

I honestly had hoped this cigar would have swept me away with delusional happiness. True happiness does not exist…unless you live in Amarillo Texas.

The strength is on the near side of medium. There is no kick in the arse.

The cigar needs some spiciness and provides none. I taste cinnamon at a low tolerance level. But that’s it.

I just glanced at Halfwheel’s review and it is loaded with flavors. But the cigar still only got an 89. Another reviewer gave it an 87 while both reviewers said this was a powerhouse blend. I’m getting bupkis.

And then I read reviews that declare not much going on but still give it a rating of 90 or higher. C’mon…you can tell me…did I go through the looking glass? Another reviewer said this cigar was one dimensional. Finally, a reviewer I can relate to.

There is no power to this cigar. DOA.

All reviewers claim a high velocity of spiciness. My spiciness must have been absorbed by the cello. And how strong the cigar smokes. Plus calling it a full-strength cigar is not accurate for the stick I am smoking.

Of the Kristoffs I’ve smoked, they have all been linear and one dimensional.

This cigar is not a $10 stick. It tastes more like a dirty diaper and hence worth maybe $5. All the $5 sticks I’ve smoked were one dimensional.

My palate could be on the blink, so I proceed with a biopsy.

The halfway point is upon me. Seems like it took forever but is planted in the 23-minute range.

I’m going to grab one of my sticks with only a few weeks of naked humi time and review it tomorrow. Gotta be better than this nicely home aged cigar.

Once I commit to a review, I must finish it despite the fact I’m having no fun.

There is no growth. Linear to its core.
Flavors are as limp as a stick of licorice. You thought I was going to say something different.

Strength makes its move and hits medium/full in a heartbeat.
Please, baby Jesus, let the second half make up for the lousy first half.

Plenty of reviewers liked this cigar.

The black pepper soars and scorches my uvula.

The boss at the Wisconsin Humane Society is a smart and funny woman. We’ve emailed several times. I sent her the review with the gopher story.
Now she stopped conversing with me. This occurred over 40 years ago. I sent her one last email explaining that gunning for gophers ruining my lawn does not mean a thing about caring for rescue animals. I don’t think she likes me any longer and I fear the job offer is off the table…over a silly gopher story. I always seem to step on my own dick.
(Right after I published the review, I check my email and it is from WHS and the boss apologized for being so busy and she wrote: “I appreciate your patience and your humor! You do have quite the knack for storytelling, it’s no wonder you have so many followers for your reviews across the globe.) I now have a schedule for training. I take my dick out from underneath my shoe.

The stick is finally powered up.
Transitions are nil. The finish is black pepper. No interesting character. Nuances and subtleties on board.

I don’t understand the science, but it seems that some brands are just not in sync with my palate. I’m sure you have experienced the same thing.

A cigar like this destroys any chance of my review being interesting.
More moves begin to take place now. Complexity arrives on the red carpet.
The strength is now full.

I now expect a bevy of comments telling me I’m full of shit.

If this blend had started with the exuberance of the last third and then continued to get better, we’d be in another universe.
There isn’t a hint of sweetness.
The tobacco tastes like junk.

Friends, I apologize for wasting your time. Thankfully, the cigar burned like a cigarette allowing a very short review.

I’m not going to finish the last 1-1/2”.
The blend is linear. Complexity is difficult to find. The flavor list is in the minus category. And there is definitely no aging of the tobacco.
Bummer.