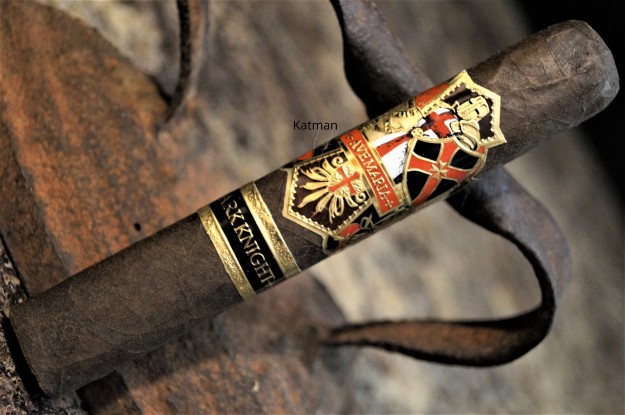 I gave these little babies two months of naked humidor time…maybe more.
Spoiler Alert: When the description says full strength, it ain’t whistlin’ Dixie. It starts off like a Muhammad Ali uppercut. I was 15 in 1965 when Cassius Clay fought Sonny Liston. In one of my middle school classes, the boys had a pool for who would win that fight. I was the only one to pick Ali. I won enough dough to buy a bunch of Beatles’ albums…which went for about $3 each.

THE WHOLE MEGILLAH:
It’s an AJ blend and part of the Ave Maria line. Some of the blends are very good. Some are not. But I do slobber over AJ Fernandez from time to time. He works with some great blenders and helps bring some fantastic blends to market like Southern Draw, Montecristo, Hoyo, RyJ, Trinidad, Highclere Castle…the list is endless.

I’ve had my sticks for a couple months, but to be honest, the P.R. does say it uses “well-aged” tobacco but identifies nothing specific.

First, based upon its strength, I’m grateful that the cigar only comes in the Robusto size. If I had to review a Toro, or larger, I’d never get through it without retching up last week’s meals. But follow me and see why I don’t mind punishing myself.

I have mentioned the universal quandary many times about why plugs in a cigar usually occur around the area of the cigar band. My friend, Detective FawkinYeti of North Carolina, sent me his hypothesis that seems to make sense:
“My speculative answer to your question as to why plugs usually occur near the cigar band…the location where the torcedor’s pinky and ring fingers firmly grasp the tobacco while they are bunching and blending…that small affected area is compacted further during the pressing stage.”

I decided to play Earth, Wind & Fire for the review. Can’t stop bopping my head and moving my legs with these guys.

The draw is just how Pappy likes it. My pathetic PerfecDraw draw adjustment tool sits there looking needy and full of despair. I shove it aside while calling it naughty names in Spanish. Fortunately, the PerfecDraw speaks 6 languages.

A lot of cigar bands on such a small stick…I disrobe the black beauty and leer at its nakedness with anticipation that it will suffice.

The first puffs are full of cocoa and creaminess and the devil’s own…black pepper up the wazoo.

Complexity nails the landing…and we are off and limping.

The bottom line is that if your palate enjoys a fair amount of AJ blends, you will like this cigar. As I said earlier, the Ave Maria line is hit or miss. This blend is a hit. The smoothness is clearly evident and blessed with a dunk in the holy water.

The thing about most AJ blends is that you don’t have to wait forever like you must with Alec Bradley, CAO, Rocky Patel, etc. AJ has that magic touch that allows even everyday sticks to be firing on all cylinders in an impatient smoker’s humidor quickly.

Flavors: Chocolate, espresso, creaminess, malt, mixed nuts (This is when you sit down and your gonads get twisted causing a screech from you and the inevitable question from visitors, “What’s wrong?” And you reply in a very high soprano voice, “Nothing.”).

The box press is a nice rectangular with corners that are rounded like an M&M.
The construction is top notch. A slow roll. And the burn line on this box press is first rate.

My girlfriend of 7 years dumped me for another guy she was having an affair with. I was distraught like nobody’s business. Two days later, she was on my doorstep in tears. We took a ride out to Palm Springs. I had E,W&F on the cassette player the whole two hours. We took a hike on a desert trail to talk. We stopped at a secluded place, and she wanted to give me the best BJ of all time. A couple minutes into it, I heard voices…I looked up and there was a trail right above us with about a dozen adults and children staring at us. We ran for it. And then she left me again for good this time.

The black pepper is calming down and finds itself planted on my lips and not so much the back of my throat.

Red berries occur for a few moments. Creamy chocolate is the driver of the plane.

Strength is an easy going medium/full. The second half will be William Wallace’s ordeal.

As I review first thing in the morning with no food in my gut, the review cigar gets a chance to shine. After a few cigars, that same cigar loses some of its movie star appeal. But this blend doesn’t change that much and stays right where you want it. A nice flavorful go to cigar that won’t piss you off.

This large Robusto is going to be a 75-minute smoke. Take your time and float downstream.

With 1-1/2” burned, the intensity of its blender’s intent kicks in. Almost at sweet spot territory, but just not quite there yet…but a good time is still had by all.

A Hershey’s milk chocolate bar with almonds. Yum. I get a blast to the palate with coconut and then it is quickly recast into coconut milk.

Pretty much a flavor profile of what you expect from a Nic puro. It is widely overdone these days, but AJ has a way with this style of blending. Generally, there are no surprises, but if it is done right, it’s a nice ride on the Slip ‘N Slide. As a teen, I can’t remember using one of these without someone ending up with a broken bone or a vicious sprain. Those things are lethal.

Lots of snobby smokers in our bubble. This blend is being treated as a throwaway. Numbskulls.

Cruisin’. The base flavors of creamy chocolate, coconut, malt, nuts, a few baking spices, and a slew of vaporized notes that appear and disappear fleetingly. It’s those little notes that give the cigar its character.

The spiciness is just foolproof. I love that little peppery kick in the arse as long as it doesn’t dominate and take the Sudetenland without permission.

The kids had a wonderful Halloween party this weekend. Packed full of cops and their spouses. I found a non-cop who was just 4 years younger than me, and we got to talk about things Millennials and Gen Z know nothing about…the 1950’s and 1960’s. Unless you lived during that era, it is impossible to discuss that subject with someone that was a sperm waiting in the wings.

The strength decides to beat me with a telephone book. No bruises.

This is an excellent cigar.

I just knew I could get them cheaper than $10. I found them on Cigarbid.com and won a fiver for $15.00 or $3.00 apiece. Now that beats the hell out of the $10 price tag as sold by other sites. I postponed this review 3 days so that I’d be able to snag some without interference from you good folks…possibly thinking of outbidding me.

It is a killer $3 stick that you can grab and never be disappointed.
The burn has been worthy of acclaim and a round of golf claps.

The sweet spot appears at nearly 3” burned. It explodes like the apartment next door inhabited by an ISIS cell.

“Paint it Black” by the Stones is playing. They used a dulcimer in the song. I was at McCabe’s Guitar Shop in Long Beach when Keith Richards and assorted members of the road crew came in to buy several of them. I just sat there and said nothing. I was only 16. McCabe’s was my hangout. After they left, I asked one of the salesmen what song they planned on using the dulcimer for…he told me, “How the fuck should I know?” Good times.

I’d love to tell you that the flavor profile expands like your weenie in a tittie bar…but it sticks with what it does best…a fine representation of a Nic puro done correctly.

Even though I am close to unconsciousness, I am enjoying the hell out of this blend.
Newbies… Fuhgeddaboudit. Experienced smokers…passing out is an acceptable side effect.

Normally, if a cigar is this strong, I can’t make it to the end. But the character of this blend keeps me chooglin’. I’ve taken LSD so I can cowboy up.

I’m sure that 6-9 months of humidor time will subdue the strength somewhat. I just don’t have the patience.

With 1” to go, I face plant on the laptop’s keyboard…a signal that I’m now done.

1968
I took this sweet young thing to see The Doors in concert at the L.A. Forum in Inglewood, CA. She was something else. First date. A friend set us up.

I was 18. I had just bought a brand new 1969 Chevy Impala Custom. It was yellow with a black tonneau roof. I had the dough to trick it out completely. It was my first new car. Prior to that, I drove my mother’s 1960 Pontiac Bonneville. That thing was a Sherman tank with a huge cow catcher grille. It could seat 7 inside the car and 5 in the trunk for drive-in movies.

For some reason, the promoter thought putting Jerry Lee Lewis as the opener was a good idea. Now if he had played his oldies; that would have been a show. But he was in his country phase. He had a 7-piece band all wearing the same country-western styled suits. The peace and love audience was bombarded with country music.

He played for an hour and when he finished, he said good-bye. The crowd went nuts because he was done. Lewis mistook this for praise.
He asked the audience if they wanted more. In unison, 25,000 people yelled, “NO!!!”

He was clearly taken aback. And then he leaned into the mic and told everyone to go to hell. As he stomped off the stage, the crowd erupted in applause. The lesson here? Don’t piss off the stoned Love Generation. (We would go on later to completely destroy the planet).

The Doors had a wall of sound. Literally. They had speaker cabinets stacked 20 feet tall. And covered the stage from one end to the other.
The band came on to thunderous applause.

Throughout the concert, Morrison drank from a bottle of whiskey. He kept a cardboard box nearby so he could puke in it. Lovely. Coulda’ been worse…we might have gotten his winkie waving at us.

I left something out. That honey I took to the Doors concert. I took her back to my parent’s house. (I lived at home my first year in college.)

I tried to screw her, but she was a virgin. I had zero skills in deflowering a woman…
And then for some reason, her age came up.
She said, “I’m 15.”
“Shit, Piss, Fuck, Cunt, Cocksucker, Motherfucker, Tits!”

I threw her off the bed and took her home. Her mother called me the next day and told me to stay away from her. I told her, “No problem, lady…I had no idea she was that young.”

Had it been another time, she would have had me arrested…and some guy named Big Butch would be still using me as a hankie.

BTW- Dr. Rod was at the same concert.