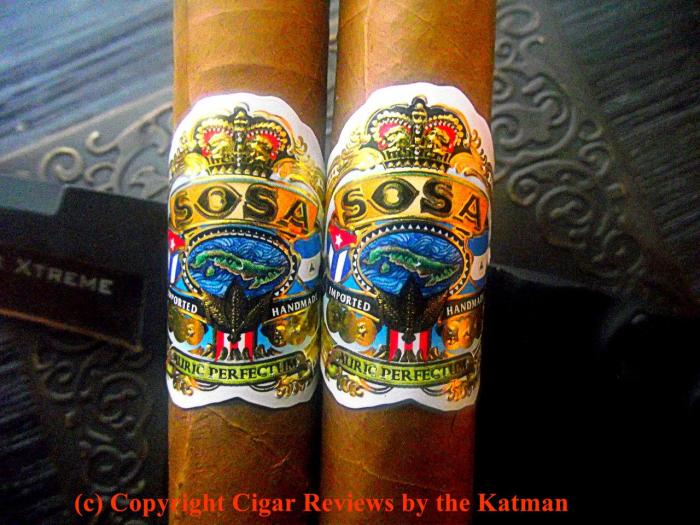 I have reviewed 6 different blends of the Sosa line and found all of them dependable and wonderful cigars with a mind to keep costs down and the price point very consumer friendly.
You may read these reviews by clicking on the cigar name:
Classic Natural, Classic Maduro, Underground, Limitado Stout Torpedo, Super Selection II, and Third Harvest.

This cigar was launched at the 2013 IPCPR trade show. These cigars come in boxes of 12.

The name of the cigar blend “Auric Perfectum” is Spanish for “Perfect Ear Lobe Skin Tags.” Back in 1908, the Sosa family would clip each other’s skin tags from their ears and a festival was born from this tradition. Only the most perfect skin tags were then put into a stew of masa and donkey tongue and offered to the gods of tobacco: Marty and Lou.

According to Sosa Cigars, the Sosa Auric Perfectum will be made available to 75 retailers until IPCPR 2014. At that point, an additional 25 retailers will be added.

This is from the Sosa web site:
Over Four Generations of Cigar Making History-The Story of the Sosa Family:
“Don Juan Sosa was a small tobacco grower in the fertile Taguasco region of Cuba at the turn of the century. By the 1920’s, his farm had become one of the largest tobacco-producing haciendas on the island. Over the next 30 years, Don Juan’s son Arturo and grandson Juan manufactured cigars for sale in Cuba and abroad, but due to political turmoil, the family was forced to leave the island in 1962.
“Juan Sosa spent the next several years searching for soils as rich as those in his native Cuba. He found them in the Santiago region of the Dominican Republic where the family re-established their factory along with operations in Miami.
“The story of the Sosa family continues, with his wife Nelda and three sons who continue the legacy of quality, handmade cigars made in the Cuban tradition.”
Photo of Juan Sosa:

The common thread amongst all the Sosa blends is flavor and taste. All have shown themselves to be real flavor bombs and I expect no less from the Auric Perfectum.

The construction is interesting as this is not a solid rock cigar. It has some give to it. Seams are a little loose here and there and there are plenty of veins, both big and small. The caps vary from a bit sloppy to well-constructed but I shall be chopping it off soon, so no matter.
The wrapper has the color of Bambi’s second cousin, Mort.

I clip the cap and find aromas of sweetness, heavy on the floral, honey, and cocoa.
Time to light up.

The first puffs are sweet and floral. There is a toasty quality. The draw is good and the char line is spot on. There is a meaty tobacco flavor. And black pepper joins the group. There is a nutty component that, at the moment, eludes me. It will come. 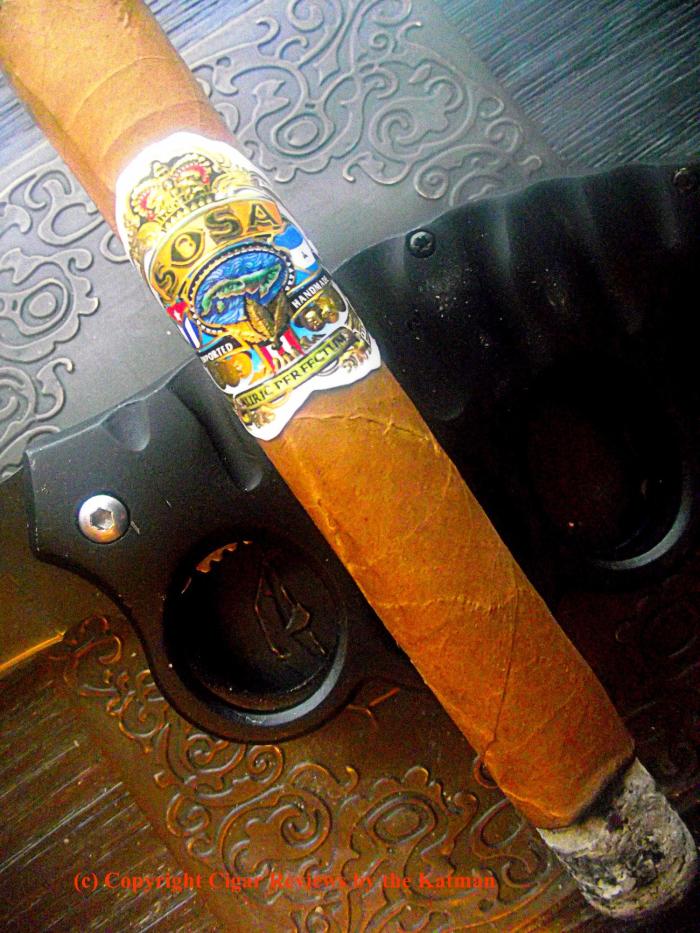 I want to thank the “man,” Arby Sosa for sending me samples of his blends. So far, every single one has been a winner. And he has done it for an extremely reasonable price point. Only the Stout Limitado is an expensive cigar showing up at $15 a pop. Arby sends a hooker along with each box purchase. What a guy!

The cigar sees some creaminess appear. Cocoa, too. The strength is mild at this point…a little over 1” burned. But, unlike most mild cigars, this one has flavor to counteract the mild strength. Red pepper is added to the black pepper. And I think I tasted ear lobe…not sure if it’s just the art of suggestion.

The nice thing about the Sosa line is that all of the blends are good to go in 2-3 weeks. Better of course, if you give them more time. But they are still extremely flavorful after that short rest. New breed, baby.

I’m only halfway through the first third and everything picks up the pace. Flavors are: Sweetness, cocoa, caramel, spiciness, nuts, earthiness, toast, and honey. It is not the usual Nicaraguan heavily influenced flavor profile. These flavors are subtle except for the peppers; black has disappeared and the red pepper is going strong.

The creaminess is hitting on 12 cylinders. All the other flavors are explosive now as the first third ends. I have to eat my words on the Nicaraguan thing. It went from milquetoast to flavor bomb in less than 2” of the cigar.

Strength is now at classic medium to my delight. Mild cigars just don’t do anything for me. 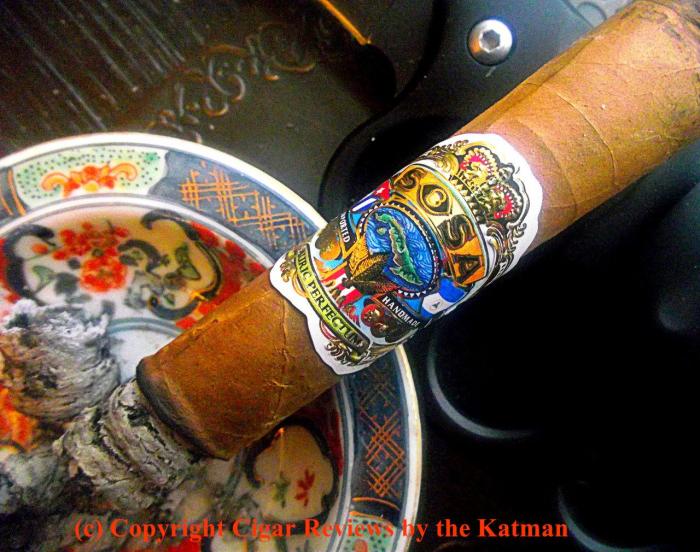 The second third passes and I am at the halfway point. Man, this cigar is pumping out flavor. Nothing has changed in the order of flavors but they are crawling all over my palate like my wife, on our wedding night, did to my….er…never mind. I really can’t remember back that far anyway. Our 29th wedding anniversary is in early February. So is my 64th birthday. And our daughter turns 28 in a couple of weeks. Damn, time flies.

There isn’t much to report as this cigar is just chooglin’ along doing its thing. It picked that set of 8 flavors and is sticking to them. 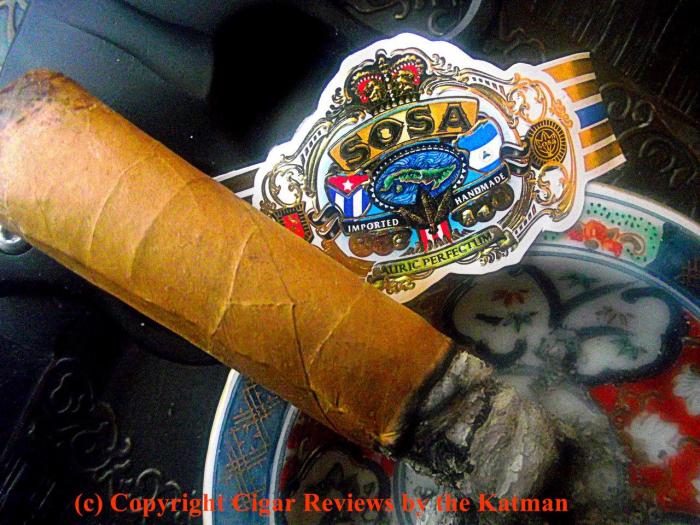 The last third sees no dramatic changes. It is a very good, solid cigar. Plenty of flavor. Easy on the wallet. Constructed with pride. Another example that a good cigar needs not cost $12 or more. Plus this whole Sosa line is meeting the current times agenda of producing fine cigars that don’t need a year to marinate a year in your humidor. 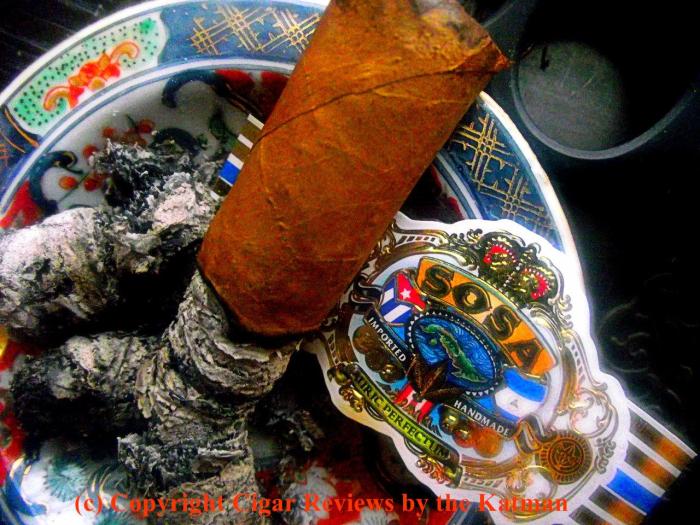 The cigar ends with a flourish. Flavors just blowing my hair back. No harshness and almost no nicotine to speak of. And cool as a cuke. The only real change is that the red pepper lands on the beachhead with guns blasting away. Nice finish.
BTW- The most complete stock of all Sosa Cigars can be found at Neptune Cigars.
Thanks Arby, my friend.