Today we take a look at the new Relic by AJ Fernandez.

From Cigars International web site:
“Many claim to know old world Cuban cigars. AJ Fernandez lived them. Raised in Cuba, but born into the cigar industry, AJ worked alongside the legendary Alejandro Robaina in Pinar del Rio, Cuba, for nearly two decades. Here, he mastered the handmade cigar, from soil to ash, with the cigar world’s greatest mind and creator as his guide. The result, some of the industry’s tastiest and most beloved morsels, including Diesel, San Lotano, Ave Maria, and Man O’ War.

“What is Relic? Maybe it’s the secret processes and tradition-steeped methods passed down from legend to master. Maybe it’s the rare Esteli-grown Habano wrapper that took nearly a decade to perfect. Maybe it’s an elusive recipe of savory tobaccos combining to pay homage to the cigar AJ based his lifetime of learnings upon. I can’t tell you what Relic means to AJ, but I can tell you what it means to you: an amazing experience unlike anything AJ has released to date.

“On paper, Relic employs a generous dose of well-aged, Nicaraguan long-leaf ligeros. Skillfully blended for optimum flavor and strength, these thick, black leaves are secured within a bold Habano binder from Ecuador, then cloaked by AJ’s rarest wrapper and proudest accomplishment. A dark, toothy, shade grown Habano wrapper from the volcanic soils of Esteli, Nicaragua. Powerful yet graceful, this leaf is true to AJ form, and is only used to create Relic.

“Once lit, each Relic consumes the palate with an immodest level of bold flavors. Perfectly executed from start to finish, the bouquet is robust throughout, offering deep notes of earth, leather, and espresso, made complete by underlying spices and hints of oak and rich chocolatey-tobacco goodness. Complexity is unwavering, and the strength satisfying. Relic truly is a product of both legend and master.”

OK. The PR bullshit is out of the way. Here is what I think. I make no bones about it. I’m an AJ fan. But look at these cigars. I betcha’ a dollar they are seconds from some experiment in the lab with Igor running things. The wrapper is a complete mess. The colors are inconsistent. Some look like your Aunt Rhoda sat on them. And others look like your cat thought they were a play toy.

These babies look like they’ve seen 40 miles of rough road. What better PR than give them a name that befits their appearance? Relic.

I picked the best looking one I could find. I got 10 sticks on Cbid for $42. That’s a deal. And I do believe they are strictly a cigar made for the CI Conglomerate.

The stick is packed to the gills. Seams are a mess as well as giant tree trunk veins visible everywhere. The wrapper is a semi-oily medium brown. I believe it is a single cap. It is the only thing applied with care so it is hard to tell. Could be a double cap.

I snip the cap and find aromas of spice, cinnamon, chocolate, cedar, leather, and hay.
Time to light up.

A wallop of spice is the first thing I notice. And then chocolate. Like chocolate ice cream.

This is the third one I’ve smoked and they were pretty much trouble free. This one though…the char line wants to take off on me.

The draw is excellent with large billows of smoke surrounding my puny head. I’ve enlarged it for the photos but I was born with an abnormally small head. Thank God for Photo Shop.

The spice really takes off. It is akin to the spice bomb that you find in many Pepin Garcia’s cigars.

There is toastiness. Toasted sourdough bread. There is a hint of sour in the blend.

The char line is now behaving itself. 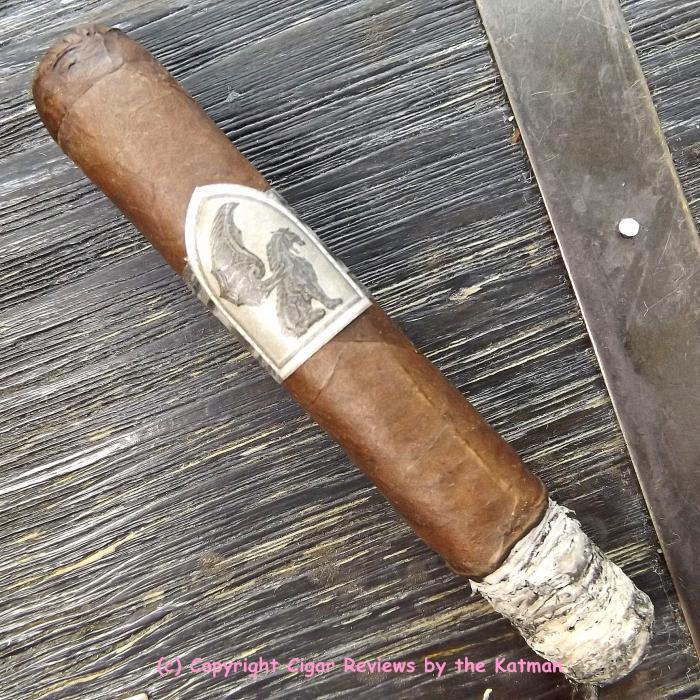 This is a bit of a strange cigar. The CI description of the cigar makes you think this is AJ’s finest creation. Look at the photo on all of the CI Conglomerate pages selling this cigar. The cigar has a beautiful, unmarred wrapper. Now look at my photos. Talk about false advertising. Wow.

I’d love to know the truth about the Relic. Was it an exercise for the #3 rollers? Was it a contest to see how well blind Nicaraguans can roll a cigar?

All of the online stores use deception in their advertising. And especially their “Specials.”

Don’t get me wrong, I am enjoying this stick. But it is sort of a one trick pony. I like that it has a consistent high level of spiciness. I like the chocolate overload. The toasty, nutty, sweet factors are nice but not exemplary.

I think the second paragraph quoted from CI tells us everything we need to know about this cigar. CI hasn’t a clue about the background of this cigar; or are at least pretending not to know. Which to me means it is a second from a project that went upside down on AJ.

The flavors are more topical and superficial than rich and complex. It is a simple flavored cigar.

I can’t believe I’m not raving about an AJ blend. Is Armageddon upon us?

I also can’t remember any hoopla made about this cigar when it was released.

There is a lack of creaminess that would help out a lot if it were present. The nuttiness moves up the short line of flavors.

So here they are ladies and germs: Chocolate, spice, nuts, toasty, raisins, and cedar.

On the good news front, next month I am buying a bass through the good graces of my long time brother, Rick T. I’ve been doing my research for the last month trying to find the best bang for the buck and I believe I’ve done that. A Fender fretless Jazz bass. I do expect to have some work done on it to make it super playable. But I can do some of it myself and the rest goes to a luthier. Shouldn’t have to put much into it as the reviews I’ve read about it give the bass 5 stars review after review. I’m going back to work my lovely readers. Or, I should say, I’m going to jump in head first once again with the passion of my life. Cigars are second. I wish we were still living in Chicago where there is a wonderful blues scene. Milwaukee is a tough town for older folks that play. A lot of metal here.

Flavors begin to liven up a bit. The chocolate becomes very dense. Like a brownie or fudge.

Creaminess makes its first entrance. Makes a big difference in the flavor profile of the Relic.
The sweetness has a cotton candy element.

The char line is spot on. And despite the wrapper looking so slap dashed, it is hanging tough and giving me no angst at all.

The Relic by AJ Fernandez is a much better blend now. I will give the cigar the benefit of the doubt by saying that more humidor time might do it some good.

And then, the Relic kicks into high gear. There is the AJ I know and love.

Complexity is digging its heels in. It finally has a nice balance. And, for the first time, a nice finish.

The flavor profile expands and I can taste caramel, wood, smokiness, and leather. Each sip of water amplifies the flavors.

The Relic has now got the “It” factor. That thing that makes a dog turd different from a premium cigar blend. It is the complexity. The flavors morphing together to invent a flavor that is indescribable.

From the start, the strength has been a classic medium body. I don’t get any sense that it will get much stronger than this.

One of the things I like about AJ blends is that they are totally smokeable in 3 weeks. Of course, they get better with some age on them but they are the New Breed style. Not like the old school brands such as Punch or Patel where the blend needs a good 3-4 months before you can even begin to think about smoking them.

The finish is exceptionally long now. And in it lies a flavor that eludes my palate. It is fruity. Citrus. And a touch of pineapple. Very subtle and only detectable because it is the first cigar of the day for me. I doubt that after my 5th cigar I would even notice these new flavors.

For a change, Murphy’s Law works in reverse for me in terms of removing the cigar band. The first two had to be shredded to get them off. Today’s cigar band is carefully removed without even the slightest tear to the band.

In spite of the awful look to the Relic, the construction has done well.

Just because the Relic has redeemed itself for me doesn’t mean that I take back what I said at the start of the review. I still believe that the horrible nature of the wrappers made the release of this cigar take the wrong fork in the road. I still believe it came close to being sold as a second.

The flavor profile is burning on all 6 cylinders.

Due to the jam packed nature of the cigar, it is a very slow smoke. I’ve invested a good hour on the first two thirds.

The spiciness had waned during the halfway point. Fell of the edge of the world. Now it is back in force. Nicotine shows for the first time. And the strength does hit medium/full.

There is a touch of black licorice now.

I always listen to the classic rock station on the cable box. Some days, it plays nothing but great music. Other days, like today, it plays all the crap that makes me avoid the classic rock station here in Milwaukee. This is a dead zone for good radio. In Chicago, we had an all jazz station. That’s all I listened to. But now, I either listen to the alternative University of Milwaukee station or NPR. Like most Mid West states, there are plenty of country stations. Ptooey. (My apologies to you if you are a country fan.)

The Relic by AJ Fernandez is not a bad cigar at all. To be honest, I expected more. The second half redeems itself to some degree. If I had smoked no further than the first half, I would not recommend this cigar one bit. So maybe some more humidor time will fix that. But I can’t get over how atrocious the wrappers are.

My recommendation is to snag some on Cbid and make up your own mind. I would never spend $7-$8 on the Relic. But at Cbid prices, no problem.

ADDENDUM 4-6-2015: It’s been three months and I have lit up my final stick. The first half isn’t bad. But the last half is unsmokeable. It is harsh, hot and bitter.