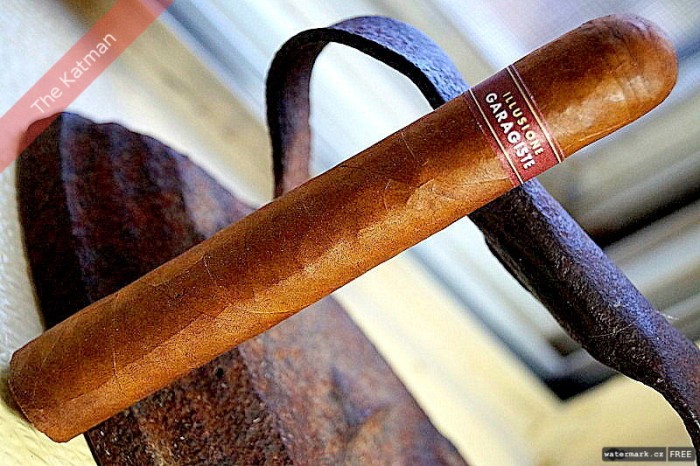 Today we take a look at the Illusione Garagiste.

BACKGROUND:
From the Halfwheel.com web site:
“The new line is named Garagiste, which is the name given to a group of winemakers in the Bordeaux region of France who emerged in the mid-1990s that produce “garage wines” in reaction to the traditional style that had been prevalent in the past. The blend of the cigar incorporates an Ecuadorian habano wrapper as well as corojo viso and criollo viso tobaccos, both of which originate from a specific farm in the AGANORSA fields of Nicaragua. Packaged in boxes of 20, the new regular production cigars are rolled at Tabacos Valle de Jalapa S.A. in Nicaragua and started shipping in July.”
Regular production.

DESCRIPTION:
The Illusione Garagiste has a beautiful oily, milk chocolate/cinnamon wrapper that is smooth to the touch.
Seams are almost invisible. Yet, it is a very lumpy and bumpy cigar. The triple cap is flawless.
But…I have three of them. Two have some very hard spots that will definitely need a cigar awl presence to clear them. Luckily, the third cigar seems to be OK…with evenly distributed tobacco.

FIRST THIRD:
Huge blast of nasal hair singeing black pepper. Lord. The draw is impeccable and smoke fills the area around my head.

Great start. I’ve had the sticks for only a month. I tried one a week in and it was a pale shadow of today’s cigar. The short wait was worth it.
Construction is on point. The char line starts off nearly razor sharp…but then gets a little wonky moments later. 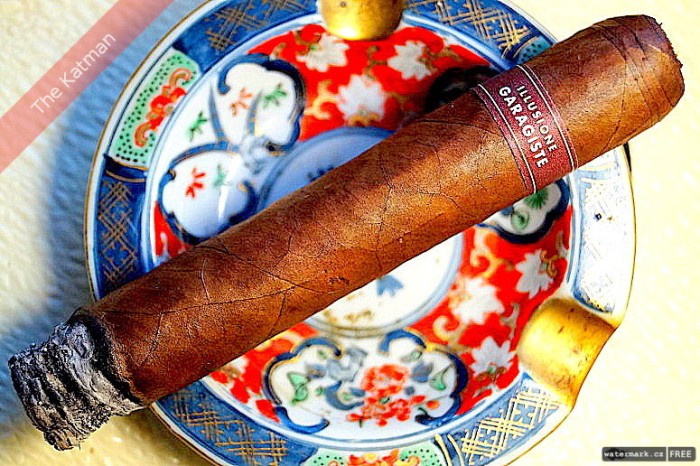 A charred savory component appears…not quite steak and not quite wood. Some sort of wood steak zombie seems to be Solomon’s choice.

The Illusione Garagiste is unique and refreshing. It doesn’t harbor the usual heavy flavors of chocolate, malts, coffee, etc. It starts as its own man.
Nice and slow going.

Transitions begin less than an inch in. Complexity is still finding its way. The long finish is a becoming a delight.

Strength tapers back to medium.

This is not your usual Illusione blend. One thinks of strong elements of both flavor and strength. This blend sends out completely different signals. The bold flavors that arrived at the beginning smooth out dramatically. Transitions are on a mission. But the complexity is still holding back. Meanwhile, the finish is strong and tasty.

And then to prove I’m a schmuck, chocolate arrives in its darkest form. Espresso follows. Creaminess pole vaults into the middle of the two. Malts develop.

The black pepper retreats to the back of the line. Cinnamon is trudging towards the front.

The long ash disembarks the mother ship and misses my naughty bits by 4.5 microns. Thankfully, it’s -8° and the barely cracked open window forces my genitals to retreat back into my body thereby avoiding a near catastrophe.

The marzipan is salty. A nicely done bizarre touch.
In fact, the Illusione Garagiste takes on a candy bar essence: A Snickers with almonds instead of peanuts.

A major tune up of the burn line is required.

The Illusione Garagiste takes a different path from its start. The big blasts of flavor points are rescinded. Green tea is gone. Pepper is nearly non-existent. A slight harshness in the back of my throat occurs, the nuttiness dissipates, and the caramel goes back to becoming a generic sweetness. The malts seem to vanish.
What happened?

Transitions come to a near halt. Complexity seems miles away. The long finish is diminished.
As if a light switch had been turned off.

Cinnamon is still in play taking over for the missing spiciness.
Creaminess claws its way to the front of the pack.
Moments later, flavors begin to return…Can a cigar be bipolar?
Black pepper returns supplanting the spicy cinnamon.
Chocolate gets back in the game.
I feel like I’m calling a basketball game.

The Illusione seems to be having an identity crisis. It can’t make its mind up on what it wants to be when it grows up.
What doesn’t reappear are any significant transitions. Complexity remains dormant. The long finish returns to the scene of the crime.

Consistency would be nice because it wants to be a very decent blend but the roller coaster ride is disquieting. No puking but a definite sense of my brain being slammed from one side of my skull to the other.

The Illusione Garagiste would ingratiate itself to me if it were a stronger blend. If past experience steads me well, this Illusione blend will make it to the Promised Land during the last half or last third.

The blend has become obsequious in its attempt to please.
The char line is requiring constant attention.

I find some hope at the halfway point.
Smoke time is 40 minutes.

The Illusione Garagiste needs a full dose of anti-psychotic meds.
It’s confused, has its ups and downs, and wants to rip my throat open with a sharp knife.

Could be a month’s humidor is inadequate. Could be this is what you get.

It feels like Dion Giolito has tried something new and it can’t decide if it’s Old School or New Breed.
Strength makes a leap of faith and hits the medium/full arena.

Transitions begin but I’m skeptical. As a one-time confused ex-president once said: “There’s an old saying in Tennessee—I know it’s in Texas, probably in Tennessee—that says, fool me once, shame on, shame on you. Fool me—you can’t get fooled again.”

That sums up my experience with this blend.

Malts exhibit some balls with a small array of flavors. This brings back the creaminess, chocolate, espresso, sweetness, and salted nuts back to the table.

The black pepper rests at the back of my palate creating an urge to clear my throat.

I can’t tell if it is momentary or the Illusione Garagiste has decided to mend its ways…the character of the blend seems to be settling down into a more cohesive flavor profile.

Transitions seem to be working in harmony and earnestly. Finally…some complexity begins to rear its pretty head. Finish returns to being long and tasty.
Is this the turning point? We shall know within a few minutes.

Strength is a solid medium/full.

The Illusione Garagiste moves into the position of a well-balanced blend.

Only found a few reviews and they all differ. Interesting. They range from “stellar” to just OK.
I’m experiencing the middle ground. Maybe the stick should be thrown into your humidor and forgotten about for 6 months…or not.
LFD makes some outstanding blends. But also from the mind of Giolito comes some mediocre blends.

During the last third, the Illusione Garagiste finds its place in the universe. I’m finally digging the blend. But the inconsistency has me in a quizzical state.

Now, the cigar started with a bang and then tapered off into Mr. Toad’s Wild Ride.
The early stages were devoid of transitions and complexity. If the blend had maintained its path and increased its impact with each puff, I’d have been much more impressed.

So now I’m settling for truly enjoying the last third which seems to be a tease as what could have been.

The delicate ash has fallen into my lap twice now. Yes, I’m now officially skittish. While my private parts may not mean much to you…they have a certain importance to me.

As a fan of Illusione, I want to give the blend the benefit of the doubt and state that intense hibernation may be what the doctor ordered. I might come back in a couple months and revisit this review.

I can’t argue with the price point. Imagine if Giolito followed the lemmings off the cliff and decided to make this a $12 stick? The seemingly normal price for a decent blend these days.

I would have been very happy to report this was a killer cigar but I can’t. It reeks of possibilities but this wish never reaches full fruition.
A good cigar that has some mental health issues.

There seems to be no shortage of online cigars carrying the Illusione Garagiste. But all seem to be adhering to the price point set out by Giolito.

The usual suspects of discount online stores see no impressive reductions of price.

The nicotine is held at bay. No hallucinations. No crash helmet required.

Based upon the last third, I would have rated it much higher. But the consequential inconsistencies play an important part of my final rating.
As reviewers cannot agree, it is up to you to decide.