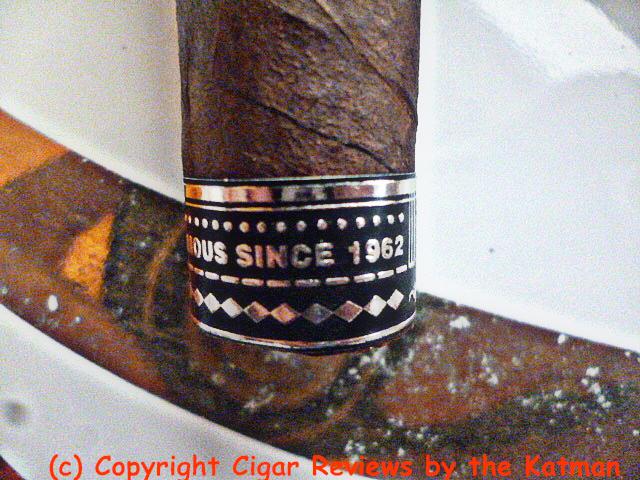 At the 2013 IPCPR trade show, Camacho unveiled its new “Bold” series of blends: Connecticut, Corojo, Criollo, Diploma, Liberty, and Triple Maduro. All of which hit the stratosphere with their price points. All ranging from $8.00-$14.00 each.
The Diploma is a delicious hodge podge of international leaves. Camacho says in their PR release that this is “the most brazen move in their nearly 50 year history”
The new Camacho web site is pretty cool looking.

The massive cigar band is a mish mosh of different colors…mostly black and silver (Go Raiders), and purple. The main band has this written, in very small letters: “A complex, revved-up smoke begging to be taken for a spin.” Nice.

And the new logo, on all six of the blends, says “CAMACHO-BUILT BOLD.”

The foot band is black and silver with the words: “INFAMOUS SINCE 1962.” On the back side of the band are very thin black and silver striations. Mesmerizing.
I suppose if you wave the cigar band in front of someone long enough, you can hypnotize them.

The only blend I’ve reviewed is the Triple Maduro.

Reception of this new direction has been very positive by smokers in spite of the high cost.

Only half of the cigar is visible due to the cigar bands. It is a well-made stick. Seams are invisible. Veins are small. The triple cap is impeccable. The dark brown wrapper glistens with oil. And it feels very toothy.

I clip the cap and find aromas of earthiness, dark cocoa, baking spices, leather, citrus, and spice.
Time to light up.

Nice start with some good flavor…Spice starts off with a subtle bang followed by leather and espresso. The cigar is very meaty. And a subtle cocoa element tops things off. The citrus aroma translates to a nice background flavor. The balance is exceptional so early in the cigar.

The red pepper is doing its job by clearing my sinuses. Kleenex! I command thee!

A sweetness appears moments after the other flavors. With that, is a salty nuttiness. The espresso moves to the front of the line just behind spiciness and above sweetness. The cigar displays a rich earthiness.

The draw is spot on and the char line is near perfect.

After a few dreary rainy days, now we will experience cloudy, dreary snowy days. Poor California experiencing that drought. My heart goes out to the farmers.

The lemon zest element becomes a little stronger but still in the background. The cigar’s strength starts out at classic medium but by the first inch, it begins to move upward. My crystal ball tells me I’m in for the spins in the next hour.
Creaminess appears near the end of the first third. It isn’t potent, but rather; a subtle nuance that complements the cocoa and coffee flavor.

By the constant changing of flavors, the cigar is finding its complex center very early in the smoke. The stick becomes chewy with a long finish where flavors are more distinguishable.

The Diploma is the most inexpensive blend of the bunch. But the cigars are not price controlled and you have to shop around. I’ve seen the price swing more than $3 per cigar. And these blends rarely show up on the auction sites.

The second third has just been passed and the flavors, in descending order: Spice, coffee, earthiness, creaminess, cocoa, sweetness, nuts, and lemon zest.

The cigar band is removed and there was a boat load of glue on it ruining the look of the back of the band. Now we have a very naked cigar with a little over 3” to go.

Strength is most definitely at medium/full. But no sign of nicotine yet. The char line needs a minor correction that is more for aesthetics than truly necessary.

The cigar is truly well balanced now. And it is here that it becomes a flavor bomb. The angels must have heard me because as I write those words, giant snowflakes begin to fall. This will cover up the dog crap in the back yard. Two birds with one stone.

It is so overcast outside that it looks like sunset.

The red pepper really kicks in now. It supplants the other flavors. The creaminess helps tame it. 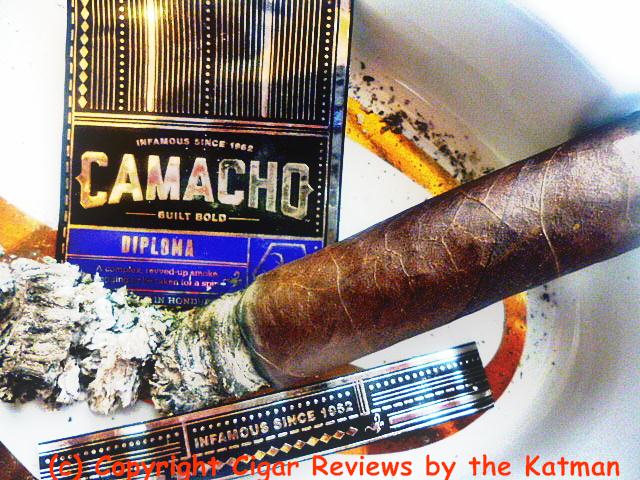 Davidoff really threw the dice on the renovation of the brand. Re-blending and introducing new blends; and then upping the price points was truly a bold move. But the cigars seem to be worth every dime. They are the rare cigar that provides an experience rather than a time killer.

I near the beginning of the last third. This cigar is a real charmer. All earlier described flavors are present and accounted for. And in the same order. The cigar is cool and refined.

The meatiness moves forward in the pack. Almost a BBQ flavor. But not smoky. It drags the earthiness with it.
The cigar is uber complex. Every puff provides a different flavor profile. The char line has remained spot on since the early correction.

With about 2”+ to go, the body hits full. No nicotine yet. Thank you baby Jesus.

Another inch disappears and the nicotine does a Kato to the back of my head. My head is swimming. It is much like bouncing on a water bed wearing eye glasses smeared with Vaseline. And then an odd thing happens…with 1-1/2″ to go, the nicotine has lessened its degree of severity. It is now just a mild dose of nicotine.

Flavors really explode but are reserved only for the meatiness, earthiness, cocoa, coffee, creaminess, and sweetness. The elements of citrus and nuts are gone now. The spiciness is hanging around but in a mild capacity. For such a bold full bodied cigar, it finishes without the slightest hint of harshness, bitterness or heat. Brava Camacho.

A great cigar. Look around for specials. I’ve seen the robusto go as cheap as $5 and as high as over $12…by the box.
The cigar took a good 90 minutes to smoke.

This is an old story that I published a year or two ago so I thought I would give it another spin around the turntable.
I was playing in the Todd Hart Band. A power blues trio. Todd did nothing but the music to make a living so we played out a lot. And I went to work in the mornings bleary eyed.

I played with the band for a little over 2 years. We went through drummers like Spinal Tap.

We started playing Hell’s Angels gigs a lot. They loved us. But I didn’t love them. Scum..real scum.

And then we became the official Hells Angels band of Arizona. See, they had just moved into Arizona in the late 90’s. They incorporated a lot of the outlaw bike clubs.

Now as you probably know, Arizona is the wild west when it comes to guns. You can carry openly and you can carry concealed.
I always wore a Blues Brothers type black coat. In the small of my back, I carried my ,45 cal. Glock 30. A subcompact. 10 +1 Rounds.

Whatever club we played, the Angels had taken over for the night and the parking lot had hundreds of bikes.

So a coterie of Angles took turns guarding them. With guns in plain sight. None of these guys knew anything about guns. They just like carrying them, especially in the Don Johnson type shoulder holster. 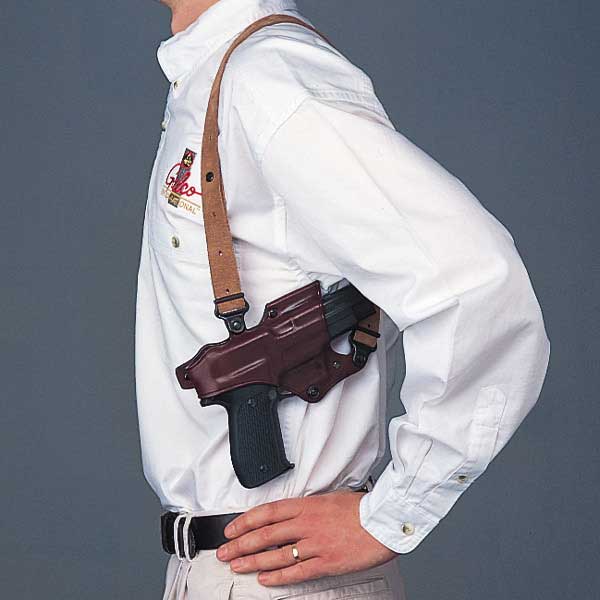 One night, during a break, I walked outside and began talking to a few of them with the shoulder holsters. I asked them to show me how they would draw the gun. And every one of them did it wrong.

If you pull the gun horizontally, you sweep the area as you bring it towards your target. Not good. Studies have shown that in an adrenaline situation, you pull the trigger 2.5 times before it is aimed at the target. So sweeping the gun means you shoot innocent bystanders.

So I showed them how to do it properly by pulling the gun out, dropping it immediately nose first to the ground, then in a twisting motion, bring it up to the aiming position without sweeping it.

They all slapped me on the back and thanked me.

And then it hit me.
These guys are famous for drug and gun running. There had to be at least one ATF agent in the bunch. And he had just watched me tell the Angels how to shoot their adversaries properly.

A month later, I quit the band.
That’s the band with me in the far right background wearing a ball cap and wearing my electric upright bass like a bass guitar: 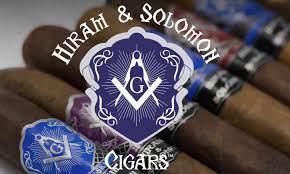