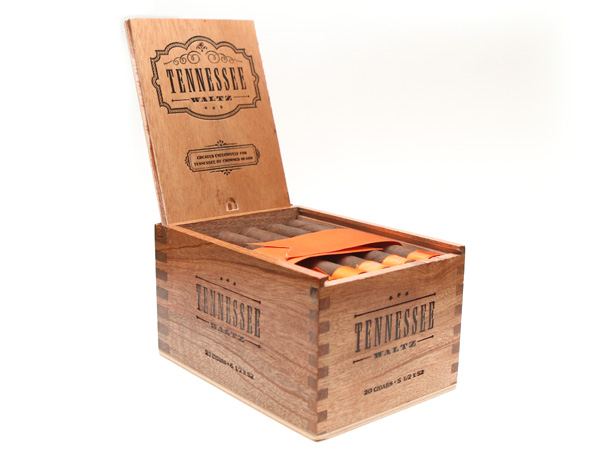 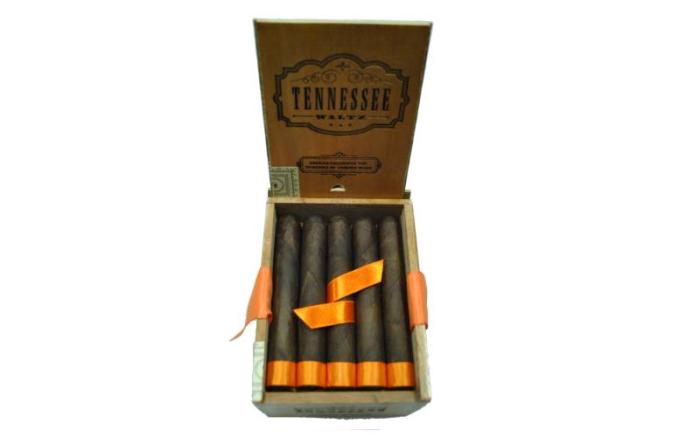 Today we take a look at a very hard to get cigar: Tennessee Waltz by Crowned Heads.
Many thanks to Justus Benjamin for the gift.
I’m definitely the last guy to review this cigar.

Does anything look familiar? No band but the footer ribbon. Just like the one on the My Father 1922 Le Bijou. Pepin Garcia gave away his hold card with this.
Originally, these cigars could only be purchased in Tennessee. A lot of stink was caused by Crowned Heads fans. Later, online stores began selling them.

I found one online store still selling them: UPtown’s Smoke Shop in Nashville.

From the Crowned Heads web site:
“It was the song that was playing in the dance hall when my maternal Grandfather met my Grandmother. I vividly recall him whistling that tune throughout my childhood. It’s a song that was made popular in 1950 by Patti Page, and has been recorded by everyone from Sam Cooke to Otis Redding to Norah Jones.

“The state of Tennessee is also near and dear to my heart. I met my wife here, my family is here, and of course, Crowned Heads is headquartered here in Nashville. “Crowned Heads owes a great deal to the people of Tennessee for their support from the very beginning. And so it is with a sincere spirit of gratitude that we present “Tennessee Waltz.”

“Tennessee Waltz is manufactured by My Father Cigars S.A. in Esteli, Nicaragua, and is the first Crowned Heads cigar to utilize a Connecticut Broadleaf wrapper. This unique medium-to-full bodied cigar is available exclusively in our great state of Tennessee. We hope you will enjoy this cigar that means so much to all of us here at Crowned Heads–and we thank you for your support which allows us to ‘Carve Our Own Path.’
-Jon Huber
Crowned Heads”

I’m not a big fan of Crowned Heads cigars. I found the Las Calaveras to be very good and I liked the Jericho Hill and La Imperiosa. The others were OK. I had a run in with the second owner of Crowned Heads. At least I think he is part owner. I remember his name as Wes and that’s it. He didn’t like my review of the Mason Dixon Project and wrote a not very nice comment at the bottom of the review. Another reader had a run in with the other owner, Jon Huber, and discusses his encounter. Good reading.

DESCRIPTION:
I love the wrapper color but otherwise it is a very rustic looking stick. The wrapper is a mottled coffee bean/baking cocoa oily brown. Seams are fairly tight. Lots of small and big veins. The triple cap application is sloppy on both samples that I received.
And the wrapper feels both smooth and toothy depending on the place where you stroke your stogie. The cigar is jam packed. Hard but the proper give when depressed. (Can a cigar get depressed? Do they have Prozac for cigars? Just a thought.)

AROMAS AND COLD DRAW NOTES:
From the shaft, I smell sweetness, spice, and citrus. The early reviews of this cigar complained about the over abundant smell of barnyard. As this cigar is nearly a year old, that barnyard element is completely gone.
From the clipped cap and foot, I smell spice, molasses, mint, citrus, earthy notes, and a bit of coffee.
The cold draw presents flavors of Chocolate, creaminess, spice, malt, coffee, and earthy tobacco.

FIRST THIRD:
I use my new method of lighting a cigar by lighting it from the outside edges and not touching the base of the foot at all. It seems to have worked out nicely.
This review won’t be like the other gazillion reviews that came out just as the cigar came out a year ago. A year’s worth of humidor time will make this a very different flavor profile.

We start off with a nice billowy creaminess, black pepper, chocolate, coffee, sweetness, citrus, and malt.

Right away, this group of flavors is nothing like the other reviewer’s impressions. I’m not being judgmental; but sometimes extensive home aging does wonders for a cigar blend. And sometimes, it ruins the cigar. The lengthy aging seems to have genuinely improved the Tennessee Waltz by Crowned Heads.

Strength is a solid medium body. The chocolate quality is very strong now. And so is the malt conglomerate of: Chocolate Malt, Chocolate Wheat Malt, and Coffee Malt. (See Malt Chart).

The creaminess begins to morph into cream cheese, Suzy. And a nice graham cracker sweetness appears along with the creaminess transition. Now we’re baking.
The fresh mint element, and the citrus, are wonderful components that hang in the back of the list giving the Tennessee Waltz by Crowned Heads some zest and oomph.

The malt flavors are potent. Fingers crossed that the cigar maintains a transitional character right to the end with lots of complexity, balance and long finish.

I had my doubts about reviewing a cigar a year old. I’ve been given some very nice care packages with blends right up my alley. But some of the cigars are 4-5 years old and the life of the party has disappeared completely. The flavors have been zapped away. A shame really. And I’ve found that to be a consistent issue with extensive aging.

The ash is really hanging tough. And my char line is dead nuts. See yesterday’s review of the Perdomo Craft Series Amber to read what I discovered about lighting a cigar and ridding the possibility of runs forever.

By now, there should be some complexity. There isn’t. Flavors are nice but no real serious transitions and I’ve burned 1-1/2”.
Some smoky BBQ beef shows up. There is a strong aromatic wood flavor like hickory or pecan wood. There is a nuttiness that accompanied the introduction of the smokiness meaty flavor.

I’m not sure if the lack of complexity is just the way the cigar was blended or if a year of humidor time stole it away. The balance is just so-so. The finish is short.
Strength is medium/full.

The char line is spot on. It’s needed a couple minor corrections but I used my new method of just burning 1/16” around the outside edge of the wrapper and it is miraculously fixed. It self corrects. Plus, any start of a run is stopped in its tracks if I just allow the cigar to sit in the ashtray for a few minutes to allow it to cool off and stop the forward motion of the run. Yes, I’m very pleased with myself.

The oomph is gone. The zestiness is gone. The flavors are mere shadows of themselves. What happened?
It is not a question of it being green. Could it be that this Crowned Heads blend doesn’t stand up to the test of time? I don’t know. 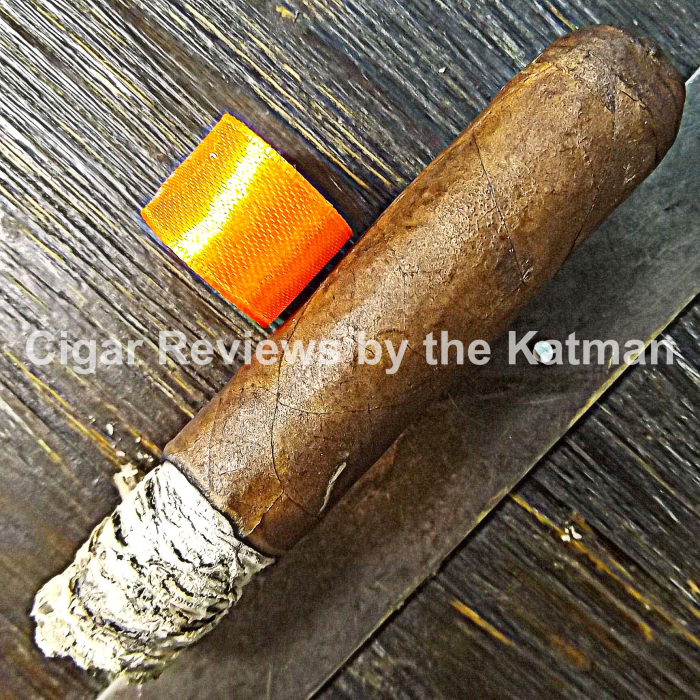 All that is left is: Malt, sweetness, nuttiness, coffee, creaminess, meaty, and a touch of cocoa.
Clearly, I am disappointed. I looked forward to this review. And now I have two consecutive so-so reviews. I have to pick carefully from my care packages for tomorrow’s review.

Strength has fallen back to medium body. The spiciness is nearly gone now.

The fact that an online store still has boxes of Tennessee Waltz by Crowned Heads for sale should have raised a red flag. After all, only 250 boxes were produced a year ago and there are some left? I don’t keep up with the chat rooms so I don’t know what street cred this blend got from the masses.

I have a feeling that this cigar blend tasted a whole lot better when it had only a couple months of humidor time.
I’m not going to waste a good after-review story on this cigar.

HALFWAY POINT:
Smoke time is 40 minutes.
The Tennessee Waltz by Crowned Heads is on a downward spiral. What a shame. What a disappointment.

I check some reviews that were published right after the cigar was released and they were smoking a different cigar. Some cigars hold up very nicely to extensive aging. And others…well..they become blah and uninteresting. The Tennessee Waltz by Crowned Heads is the latter.

I can’t taste chocolate, coffee, citrus, creaminess, or much malt. Instead, it is mostly just the earthiness of the tobacco…with a touch of nuttiness. The wonderful BBQ context flew away.

Now the review is becoming a burden. If the Tennessee Waltz by Crowned Heads is to be redeemed, it will be in the last third. Fingers crossed.
I’m sipping nothing but water. And even a sip, which usually brings a rush of flavor, is missing.

If you had a different experience with this cigar, I’d love to hear about it.

One of my dear readers lives in the Milwaukee area. His name is Bruce Cholka. He is coming over to watch football and smoke some cigars with me today. He has been one of my generous care package delivery systems. I’m in his debt.
Charlotte starts her new job tomorrow. I’m so happy for her that she has put behind her that 9 months of physical horror.
And this Thursday, I finally get the results of months of grueling tests. My daughter, Katie, is going with me. I shall report back to you.

And the Tennessee Waltz by Crowned Heads finally finds its complexity and balance. It now has a nice long finish.
The strength goes from medium to full body.

The rating will be based on this last third and the great construction.
The Tennessee Waltz by Crowned Heads has finally made the grade.

Very complex. And a dose of nicotine.
The strong red pepper puts a smile on my puss.

The cigar finishes very full bodied. Lots of nicotine. And very flavorful.
I’m conflicted about recommending this cigar. I never got a chance to taste it when it was in its prime. And a year of humidor is clearly too much for this blend.

Since some are still available, it’s up to you to make your own decision.

PRICE POINT:
I have no issues with the price of this cigar. It was a very small limited edition and Crowned Heads didn’t gouge the public due to that.
And Uptown’s Smoke Shop is not gouging the public either by selling a 20 count box of the Tennessee Waltz by Crowned Heads for $186.00. Who knows how many boxes they have so if you are interested, I suggest you don’t dawdle.
Make sure you tell them the Katman sent you.

SUMMATION:
This wasn’t a bad cigar. But for me, it falls into the category of Four Kicks or Headley Grange.
But if you do buy some, I highly recommend you don’t let it rest more than a couple months.
I want to thank Justus Benjamin for sending not just the Tennessee Waltz by Crowned Heads but a nice little care package to boot. 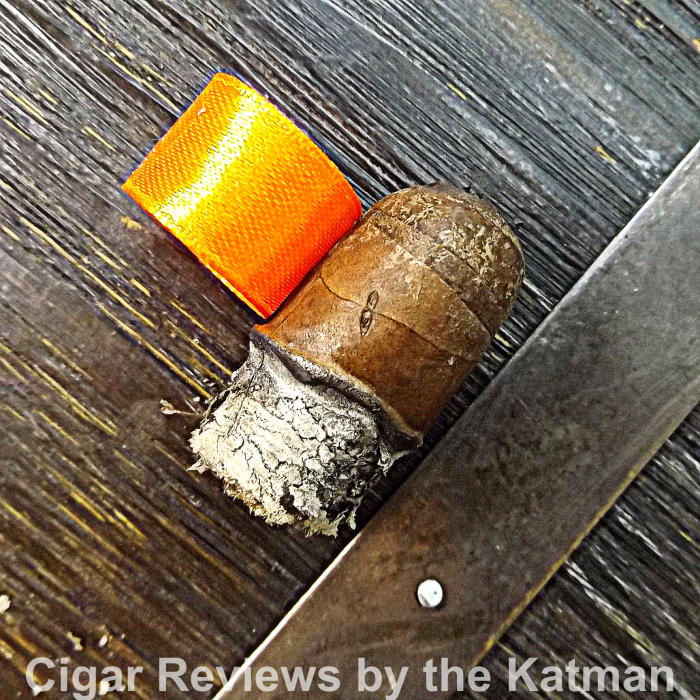