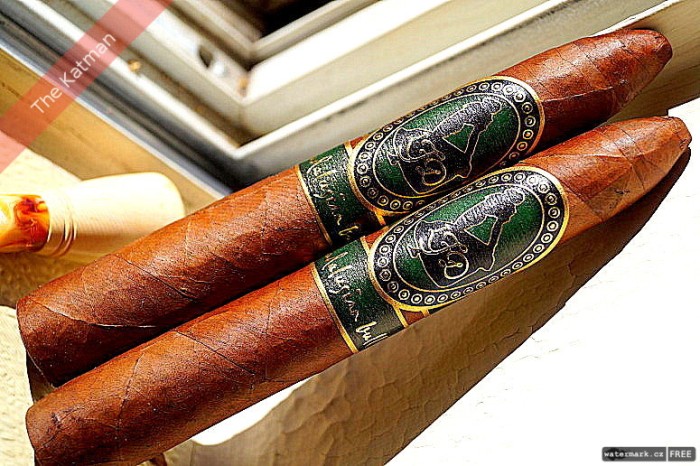 Today we take a look at the La Flor Dominicana Andalusian Bull.

From Cigar Aficionado:
“Here is an unusual, perhaps unfamiliar cigar that gleams with distinction but doesn’t have much market history, as it only came out last summer. The wrapper is a striking hue somewhere between red and brown and the beautiful shape is all curves and tapers. Salomones, as they’re known in cigar factories, are far from an easy cigar to craft. Look closely at the band, which is a shade of emerald green, and you see the letters “LFD”: La Flor Dominicana. The cigar is called the Andalusian Bull, and nothing about it is typical.

“The La Flor Dominicana Andalusian Bull is a truly new concept within La Flor’s portfolio of fine cigars. The size is based on that of an old cigar mold that Gomez found in Belgium. Naming it after Andalusia was a nod to Spain, the country where Gomez was born. And the silhouette of a matador on the band represents the celebrated history of the sport of bullfighting in Andalusia. That eye-catching shade of green is similar to that found on the Andalusian flag. But there’s more to decode. The font on the band is based on Pablo Picasso’s handwriting—he loved to paint bulls—and the scrollwork reflects patterns found on a bullfighter’s uniform.

“Fittingly, with this combination of heavy-handed and subtle symbolism comes a blend that is both bold and refined (like a bull and a matador). Gomez and his son Tony collaborated on the cigar and spent a fair amount of time fine-tuning the blend. The result was a cigar as intriguing in flavor as it is in appearance. It’s a combination of Corojo-seed Ecuador Habano wrapper on a blend that consists primarily of Dominican Criollo ’98 tobacco, a hybrid and a bit of Pelo d’Oro too. First impressions are bold and savory with strong notes of hickory and leather. But it continues to take on a complex spiciness of saffron and cumin as well as a slight tangy note that brings the strength and spice together quite gracefully—and it only gets better with every puff.

“Gomez owns the brand and company with his wife, Ines Lorenzo-Gomez. This marks the first time that La Flor Dominicana has been awarded No. 1 Cigar of the Year.”

DESCRIPTION:
There is no denying it…this is a beautifully crafted cigar.
The wrapper is very oily and is the color of chocolate/hickory/coffee. There are a few large veins but no apparent exposed seams.
There is, just barely, a fine grain of tooth covering the wrapper.
This is a heavy cigar. It feels like a bar bell in your hand. (Actually, I can’t remember what a bar bell feels like…but it made for a good analogy.)
The odd ball shape is a humdinger. And the cap is so flawless that it is impossible to determine how many due to the disappearance of seams.

FIRST THIRD:
Despite how big and fully packed this cigar is, the draw is spot on.

Flavors are just warming up. The first ones to bitch slap my palate are salted nuts, caramel, milk chocolate, creaminess, black pepper, various malts, dried fruit, and the slightest touch of cinnamon.
I didn’t know what to expect as this is my first La Flor Dominicana Andalusian Bull. Would it be a stunner during the first round or would it take some time for the flavor profile to shine?

Spiciness joins at the hip and becomes both black and red peppers at the same time.

I’ve had this cigar for two months which I concluded would be enough humidor time. While flavors are plentiful, they are moderate in their approach at the start of the cigar.
I was hoping for a Wow factor from the very start. I didn’t get it. Just a slow amplification of layer upon layer of not completely unexpected flavors.
At the moment, the Ecuadorian wrapper and DR binder and filler maintain the flavor profile in the “Been there, done that” mode.
¾” burned and the cigar becomes very salty.

There is no shortage of reviews for this blend. I seem to be late to the party. Some rave and others are more pragmatic.
The spiciness dissipates in a hurry totally surprising me. I believe it is the DR tobacco robbing me of my “spice jones.”
The reviews are incredibly disparate. No two are alike.

The Bull started off with loads of promise but the first inch is blah. No different than a $5 stick.
I expect that what follows should bring back my excitement about this cigar.
The char line isn’t crisp. Due to the huge bell shaped bottom, the burn is uneven and must be dealt with a couple times. It is too big to allow it to get away from me.

Some black pepper returns but in a sort of backhanded way. Not awe inspiring.
The saltiness is becoming annoying. It’s forcing better flavors into their holes.

I seem to be experiencing the same issues I read in the Halfwheel review. The La Flor Dominicana Andalusian Bull does not come out swinging. But, according to Halfwheel, hope seems to be on the horizon when I enter the second third.

Often, I am left puzzled by the ratings that Cigar Aficionado places upon their test subject blends. This is, of course, their No.1 pick for 2016…yet I am perplexed by the lack of enthusiasm it shows at the first 1-1/2”.

According to all accounts, this is nearly a 3 hour experience. As I ramble endlessly, I feel I will be here all morning. I’m now expecting miracles from the Bull.

All reviewers complain about the lack of pepper in this blend…and a lack of kitchen sink flavors. There are 2-3 reviews that lay it on thick with the only thing missing being Saudi fried plantains and Croatian pastry.

It seems that everyone and his brother are producing blends with Ecuadorian wrappers these days. That’s a tough wrapper to get right.
And DR tobacco is not my favorite. I find it typically bland and without kick.
Strength is barely medium.

SECOND THIRD:
Smoke time is one hour 10 minutes.
OK. I fully expect to be dazed and confused with the brilliance of this blend from this point forward. Don’t let me down Litto.

As hoped, flavors do perk up at this point. Even the spiciness returns to give the blend some punch.
There is a chocolate mintiness. A touch of orange zest. The caramel returns to enhance the creaminess that seemed to be missing in the first third. Dried fruit entertains my palate with doses of currants and red plum.
Malts are just barely there.

Strength increases to a more definitive medium. I guess I expected a much stronger cigar. This is LFD, right? Gomez’s decision to break ground with this shape and hoopla surrounding the blend gave me a false sense of what I expected to be a much stronger blend.

I should be doing the happy dance by now…instead, I’m schlepping the lackluster flavors around like a woobie.

Don’t get me wrong…the essence of the tobacco is most definitely impressive. But the La Flor Dominicana Andalusian Bull is anything but a big impressive flavor bomb.
The blend wants to emphasize its savory qualities…and elbows other flavors out of the way.

There is a charred meat quality. A touch of A-1 sauce. It is very nutty. The saltiness has disappeared completely enhancing the overall balance.
The mint is about as unusual as this blend gets.
While the ash is behaving nicely, the char line needs constant touch ups.

I can’t decide if I’m unimpressed with the blend or just didn’t expect the style in which it was designed.

It’s as if the huge possibilities of this blend are restrained due to excessive waterboarding. (I spent 14 months at Gitmo and found that, at first, waterboarding is very refreshing…but after a while, one prefers that cocktails with cheap whiskey would work better.)
Could it be that 2 months of humidor time is insufficient?

I see that some reviewers didn’t touch the cigar for 4-6 months before reviewing it. That might be the issue. Traditionally, LFD blends need a lot of humidor time. Could be that the La Flor Dominicana Andalusian Bull requires the same patience.
Yet others reviewed it less than one month after it was released and found a bounty of incredible flavors.

Saltiness returns as I near the halfway point. Spiciness recedes once again.
What qualifies this blend to be the top of the heap of 2016 by CA? I expected to be blown away.
It takes one hour and 30 minutes to reach the halfway point.

It doesn’t seem right that I had to wait 90 minutes for a bona fide flavor profile to kick in.
Still, the savory quality of the tobaccos rules the roost.

I think I finally hit pay dirt 3-1/4” into the Bull. It’s gotta be about humidor time.

The black pepper, and I say this hesitantly because the coming and going of the spiciness has been inconsistent, seems to have returned enough to liven up the pizazz of the blend.

Nicotine kicks in at this point. Strength remains at medium.

I let go of preconceptions and try to enjoy the cigar for what it has to offer.

For the first time, transitions begin. Complexity is struggling. The finish is short.
Thankfully, the La Flor Dominicana Andalusian Bull is now much better than the first half.
This is how I anticipated the Bull would react from the first puffs.

I’m going to lay back now and just enjoy the cigar. Otherwise, I will continue to write until it’s a 60,000 word master’s dissertation.

I just might have a DR tobacco bigotry. Never cared much for it. So my palate may be prejudiced. I have no other explanation as to why this blend doesn’t wow me. Not only does it not wow me, I am completely in the dark as how this cigar made it to No.1 on CA’s 2016 top cigar list.

Maybe Gomez added opium to the samples he gave to CA.

I realize that smokers that were able to get their hands on the La Flor Dominicana Andalusian Bull and loved it will think I’m full of shit.

With less than a couple inches to go, the Bull struggles to find its exceptionality.
I’ve said it twice now…it’s gotta be about humidor time. Nothing else makes sense.

I’ve sat here for hours waiting to be bowled over. The La Flor Dominicana Andalusian Bull doesn’t accomplish this.

Cigar Aficionado did Litto Gomez a real solid with their declaration of this blend’s supremacy. I don’t get it.

I choose Option #3. I will publish the review and come back in a couple months and make the comparison.
Flavors remain in the background. I can sum it up by saying the Bull is a very earthy cigar with an unusual figurado shape. It’s the best I can do.

If Litto Gomez’s intention was to blend it with this end in mind, then he did a good job. I’m flummoxed by the crazy rave reviews providing kitchen sink lists of flavors.

For me, the La Flor Dominicana Andalusian Bull is a one trick pony.

Thank goodness I don’t work in the cigar industry like all the other reviewers. Backlash could be severe.